Social Security Disability Insurance (SSDI), an integral part of Social Security, provides modest but vital benefits to workers who can no longer support themselves due to a serious and long-lasting medical impairment. The Social Security Administration (SSA) administers SSDI.

Some 8.2 million people receive disabled-worker benefits from Social Security. Payments also go to some of their family members: 104,000 spouses and 1.4 million children.

SSDI benefits are financed primarily by part of the Social Security payroll tax and totaled about $145 billion in 2019. That’s less than 4 percent of the federal budget and less than 1 percent of gross domestic product. Employers and employees each pay an SSDI tax of 0.9 percent on earnings up to Social Security’s tax cap, currently $142,800. The program’s financial transactions are handled through an SSDI trust fund, which receives payroll tax revenues and pays out benefits and which is legally separate from the much larger Social Security retirement fund. The most recent projections (prepared before the COVID-19 pandemic) estimate that the SSDI trust fund will need replenishment in 2065.

Part I: Why Is Social Security Disability Insurance Important?
Part II: Why Have the SSDI Rolls Grown?
Part III: Who Receives SSDI?
Part IV: What Financing Issues Does SSDI Face?

Part I: Why Is Social Security Disability Insurance Important?

Social Security is much more than just a retirement program. A young person starting a career today has a 1 in 3 chance of dying or qualifying for SSDI before reaching Social Security’s full retirement age.

SSDI is an earned benefit that offers vital protection to millions of workers. Through their payroll tax contributions, almost 156 million workers have earned SSDI protection in case of a severe, long-lasting medical impairment. About 8.2 million of them receive disabled-worker benefits from SSDI.

Disability can have devastating economic consequences. Not only can disability happen to anyone — especially with advancing age — but it greatly harms people’s economic circumstances. The worker’s earnings, total family income, and purchases of essentials like food and housing all fall significantly.

The number of disability beneficiaries grew substantially from the 1990s through the early 2010s but has since declined. The bulk of the increase stemmed from four big demographic factors:

When adjusted for these factors, the share of insured workers receiving SSDI benefits grew only modestly and has declined in more recent years, as the baby boom generation has aged into its peak retirement years. (Disabled workers are converted to retired workers at the full retirement age — currently 66 and scheduled to rise to 67 — and many baby boomers have reached that milestone.)

Not only has the population grown, but the aging of the baby boomers caused a temporary spike in SSDI eligibility, which is now subsiding. Population growth, aging, and women’s labor-force participation boosted the eligibility pool for SSDI. When SSDI eligibility peaked, most baby boomers — people born between 1946 and 1964 — were in their 50s and 60s, years of peak risk for disability. (And female boomers, unlike earlier generations of women, are overwhelmingly likely to have worked enough to be insured for SSDI.) Now the baby boomers have aged into or are approaching their retirement years, and SSDI enrollment has declined. 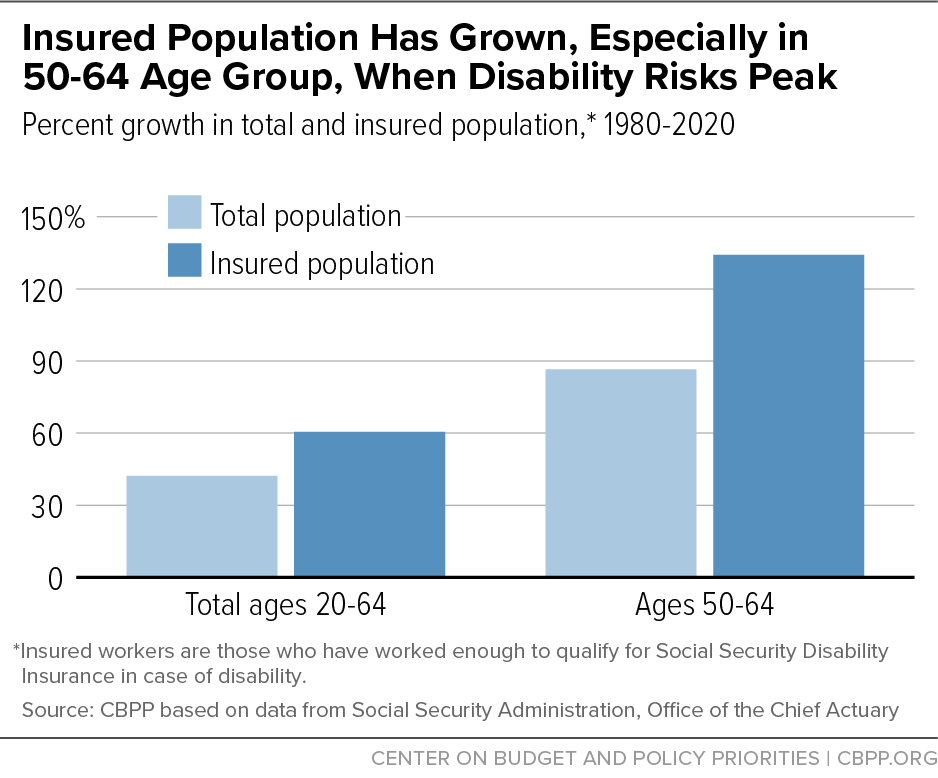 Women SSDI beneficiaries have caught up with men. In SSDI’s early years, male beneficiaries vastly outnumbered women. As late as 1990, that ratio was almost 2 to 1. Now, with the growth of women’s participation in the labor force, nearly equal numbers of men and women collect SSDI. 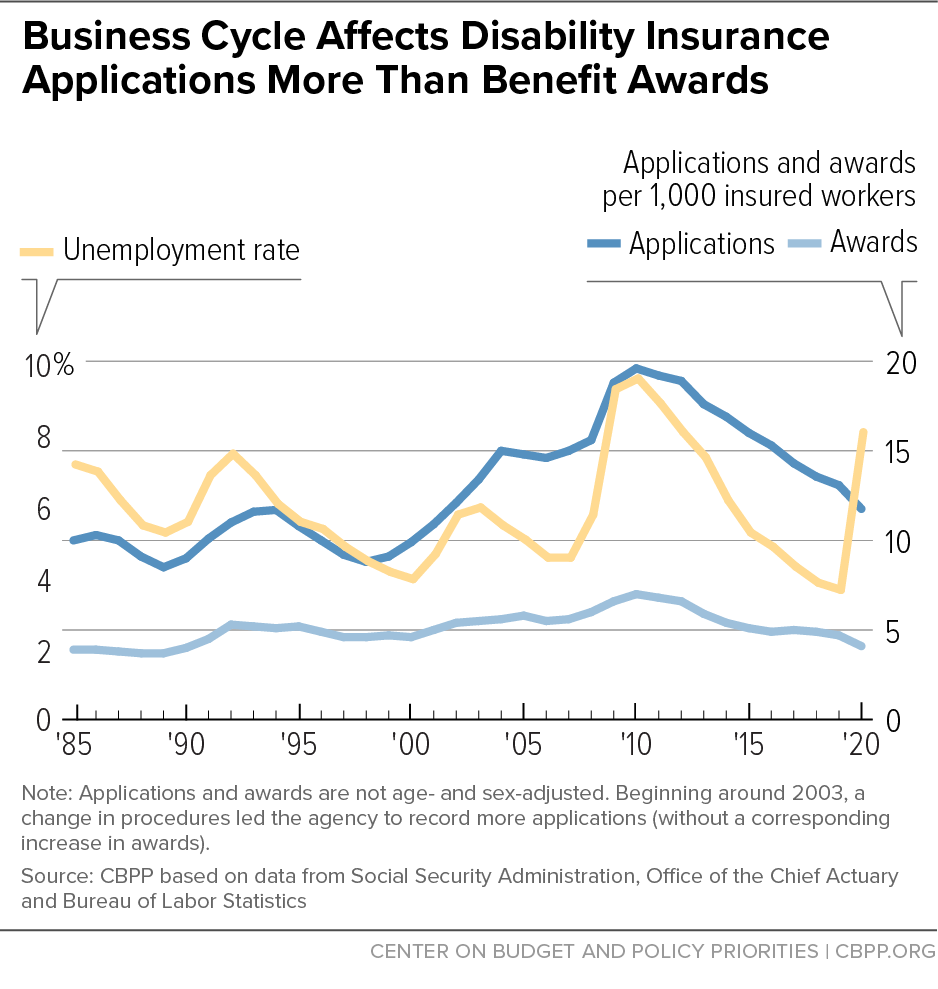 SSDI growth has leveled off. In fact, since 2014 the number of beneficiaries has fallen as demographic and economic pressures on the program have eased. Social Security’s trustees project that the share of Americans receiving SSDI will remain stable in the coming decades.

Eligibility criteria are strict, and most SSDI applicants are rejected. Applicants for SSDI benefits must be —

Lack of education and low skills are considered for older, severely impaired applicants who can’t realistically change careers — but not for younger applicants.

There is a five-month waiting period for SSDI, but Supplemental Security Income may be available during that period for poor beneficiaries with little or no income and assets.

SSA denies applicants who are technically disqualified (chiefly because they haven’t worked long enough) and sends the rest to state disability determination services (DDS) for medical evaluation. Applicants denied at that stage may ask for a reconsideration by the same state agency, and then appeal to an administrative law judge (ALJ) at SSA. Roughly half of people who get an initial denial pursue an appeal.

Ultimately — if we follow a cohort of applicants to the end of their application and appeal process — fewer than 4 in 10 are awarded benefits. Among applicants who meet the program’s technical requirements, slightly more than half are found medically eligible for SSDI.

Allowance rates at the initial application and reconsideration stages have been relatively stable over the last two decades. However, allowance rates dropped noticeably at the ALJ stage from 2010 to 2014, as SSA increased oversight of hearings. (These allowance rates reflect decisions made in a particular year, on applications filed in different years, so they aren’t directly comparable to those derived from following a cohort of applicants through their entire process.)

Allowance rates remain higher at the ALJ stage than at the initial stage, however. This is partly because ALJs often see claimants whose condition has deteriorated in the year or so since their application was turned down and whose application is better documented (typically with the help of an attorney) than at the DDS stage. 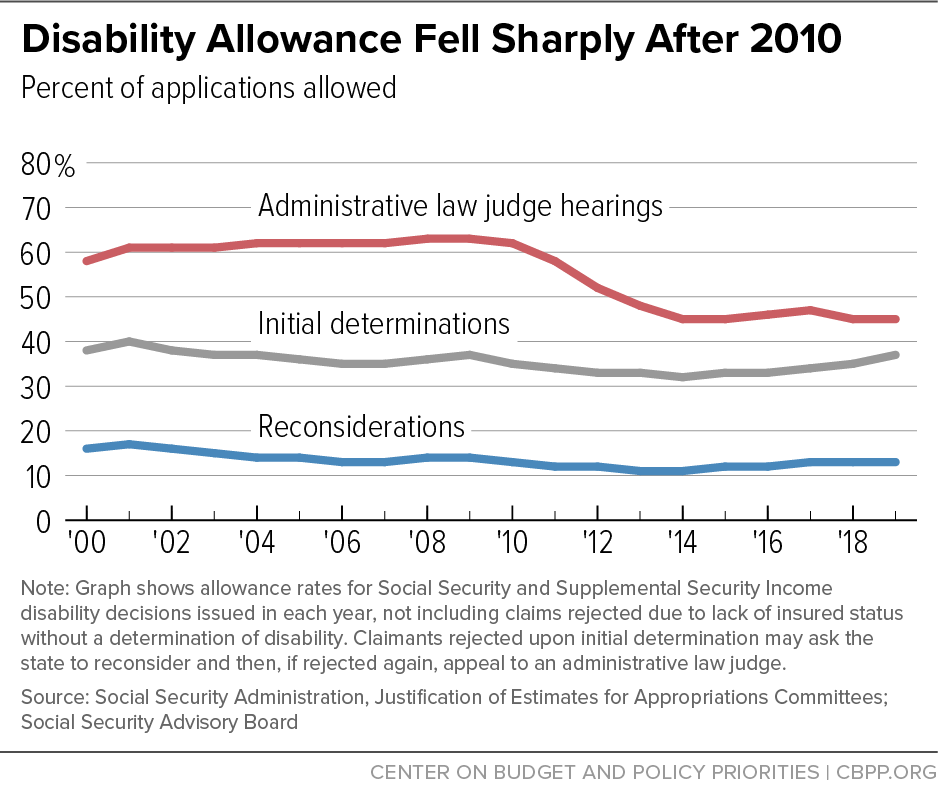 SSDI beneficiaries are mostly older and have severe physical or mental impairments. The typical SSDI beneficiary is in his or her late 50s — 75 percent are over age 50, and nearly 35 percent are 60 or older — and suffers from a severe mental, musculoskeletal, or other debilitating impairment. Physical disorders dominate among beneficiaries age 50 or older. Mental disorders — including intellectual disability (formerly called mental retardation), mood disorders such as bipolar disease and severe depression, organic mental disorders associated with brain disease or damage, psychotic disorders such as schizophrenia, and other mental impairments — account for half of beneficiaries under age 50.

SSDI beneficiaries experience high death rates. Mortality among older SSDI beneficiaries — who dominate the program’s enrollment — is three to six times the average for their age group. Many die within a few years of qualifying for SSDI.

SSDI beneficiaries have limited work capacity. SSDI applicants typically suffer a sharp drop in earnings before turning to the program. The most severely impaired — who are awarded benefits — seldom work afterward. Even rejected applicants fare poorly in the labor market afterward, more evidence that the program’s eligibility criteria are strict.

Although SSDI allows beneficiaries to supplement their benefits through work, few are able to do so. Program rules allow and encourage SSDI beneficiaries to earn up to the “substantial gainful activity” level ($1,319 a month in 2021, about 40 percent of median earnings for a high-school graduate with no college). Beneficiaries may earn unlimited amounts for a nine-month trial work period and a subsequent three-month grace period before benefits are suspended. Even then, they may return to SSDI if their earnings fall. And former beneficiaries who’ve returned to work may keep their Medicare (which is available to SSDI beneficiaries after two years) for seven and a half years after their cash benefits stop.

It’s useful, too, to compare SSDI beneficiaries with rejected applicants and with people who’ve never applied for benefits. One careful study found that only one-fifth of beneficiaries aged 45 to 64 — and only about half of rejected applicants — had any earnings two years after application, and even fewer had significant earnings. In contrast, healthy workers of the same age (who didn’t seek SSDI benefits) were likely to work and had substantial earnings.

SSDI costs have leveled off, but the program faces a long-run funding gap. SSDI costs have stabilized as the baby boomers move from their peak disability-prone years to their peak retirement years. But SSDI’s costs will still exceed its revenues. Over the next 75 years, its shortfall is projected to be about 6 percent of the program’s costs or income. (The latest annual report from the Social Security trustees does not reflect the effects of the COVID-19 pandemic and the resulting recession on the programs’ trust funds, and so doesn’t provide an up-to-date picture of Social Security’s financial status.)

SSDI has financial challenges but doesn’t face “bankruptcy.” The payroll taxes that workers contribute out of every paycheck fund most of SSDI’s costs. In addition, SSDI has built up trust fund reserves, which Social Security’s trustees estimate will last until 2065. At that point, tax revenues will be enough to pay for 92 percent of benefits — even if policymakers do nothing to strengthen Social Security’s financing (though they always have in the past).

Though the SSDI trust fund has enough funding for more than three decades, policymakers must address overall Social Security financing before then. Overall, Social Security can pay full benefits for 16 more years, the trustees’ annual report shows, but then faces a significant, though manageable, funding shortfall. Policymakers should address Social Security’s long-term shortfall primarily by increasing Social Security’s tax revenues. Social Security will necessarily require an increasing share of our nation’s resources as the population ages, and polls show a widespread willingness to pay more to strengthen the program.

SSDI benefits are modest. The average disabled-worker benefit is about $1,236 a month, and 90 percent of beneficiaries get less than $2,000 a month.

Most beneficiaries — especially unmarried ones — rely on SSDI for most of their income. SSDI benefits replace about half of past earnings for a median beneficiary.

Since the pandemic struck in early 2020, field office closures due to COVID-19 have added to the problems caused by inadequate SSA funding.