Social Security Disability Insurance provides earned benefits for workers who can no longer support themselves through work due to severe impairments.

Social Security Disability Insurance (SSDI) is an integral part of Social Security. Workers contribute to SSDI and earn its protection in case they can no longer support themselves due to a severe and long-lasting disability. The Social Security Administration (SSA) administers SSDI.

In June 2020, 8.3 million people received disabled-worker benefits from Social Security. Payments also went to some of their family members: 110,000 spouses and 1.4 million children.

SSDI benefits are financed primarily by Social Security payroll tax contributions and totaled about $145 billion in 2019. That’s less than 4 percent of the federal budget and less than 1 percent of gross domestic product. SSDI’s share of the payroll tax is now 0.9 percent of earnings up to Social Security’s taxable maximum, currently $137,700. Benefits are paid from the SSDI trust fund, which is legally separate from the much larger retirement and survivors trust fund. The most recent projections (prepared before the COVID-19 pandemic) estimate that the SSDI trust fund will need replenishment in 2065.

Social Security Disability Insurance provides modest but vital benefits to workers who can no longer support themselves due to a severe and long-lasting medical impairment.

The large majority of SSDI beneficiaries have extensive work histories; the average beneficiary had 22 years of work experience and earned middle-class wages before becoming disabled. A typical SSDI beneficiary is in late middle age — about 75 percent are 50 or older, and about 35 percent are 60 or older — and suffers from a severe mental, musculoskeletal, or other debilitating impairment. Beneficiaries’ labor-market prospects are very poor, and their death rates are at least three times as high as the general population’s.

SSDI’s strict criteria mean SSA rejects most applicants. The agency first screens for technical disqualifications (primarily, failure to meet SSDI’s work history requirements), then submits the remaining applications to each state’s disability determination service (DDS) for medical and vocational evaluation. If denied at the DDS level, an applicant may appeal. Ultimately, fewer than 4 in 10 applicants are awarded benefits. SSA regularly reviews beneficiaries to end SSDI payments to those who have recovered.

A Lifeline for Workers Facing Hardship

SSDI beneficiaries receive modest cash benefits, based on their average earnings over their career, after a five-month waiting period. The benefit formula is progressive: higher earners receive a benefit that is larger in dollar terms but represents a smaller fraction of their prior earnings. After 24 months of receiving benefits, SSDI beneficiaries also become eligible for Medicare.

The average monthly SSDI benefit in June 2020 was $1,259 (or just over $15,100 annually). Benefits replace about half of disabled workers’ final earnings prior to disability, on average. In a minority of cases, other family members may also be eligible for benefits — most commonly, the minor children of the worker.

SSDI provides a lifeline for workers experiencing great hardship. Without it, nearly half of disabled workers would be poor. Even with disability benefits, about 1 in 5 disabled workers are poor and many are near poor.

All SSDI beneficiaries can earn up to $1,260 a month (in 2020) as long as they are able and with no loss in benefits — which could double the income of a beneficiary receiving the average benefit of $1,259. Beneficiaries may earn unlimited amounts without jeopardizing their benefits while they test their ability to return to work during a nine-month trial work period and three-month grace period. Other program features, like extended Medicare eligibility, are designed to smooth their transition back to the labor market. SSDI benefits are low, and one would expect beneficiaries to take advantage of these rules by trying to supplement their benefits with earnings if they are able to do so.

However, evidence suggests that few beneficiaries could earn more than very small amounts if they did not receive SSDI. Only a minority ever work again after qualifying for the program. Most applicants’ earnings fall sharply before they turn to SSDI. Studies show very few beneficiaries are able to earn even close to the maximum allowed. Studies of rejected applicants show they struggle in the labor market — evidence that SSDI’s criteria for disability are, indeed, very strict.

SSDI Growth Has Leveled Off

The number of disability beneficiaries grew substantially in recent decades, though it has since started to decline. The bulk of the increase stemmed from four big demographic factors: overall population growth, the aging of the baby boomers into their 50s and 60s (because the risk of disability rises with age), the rise in women’s labor force participation (which means more women have worked long enough to earn SSDI’s protection), and the rise in Social Security’s full retirement age (which delays SSDI beneficiaries’ reclassification as retired workers). After adjusting for age and sex, the Social Security actuaries find that 3.5 percent of the insured population received benefits in 1995, rising to 4.0 percent in 2019. That increase is far less dramatic than the growth in the number of beneficiaries. Since 2014, the number of beneficiaries has fallen modestly as demographic and economic pressures on the program have eased, and the trustees project that the share of Americans receiving SSDI will remain stable in the coming decades. 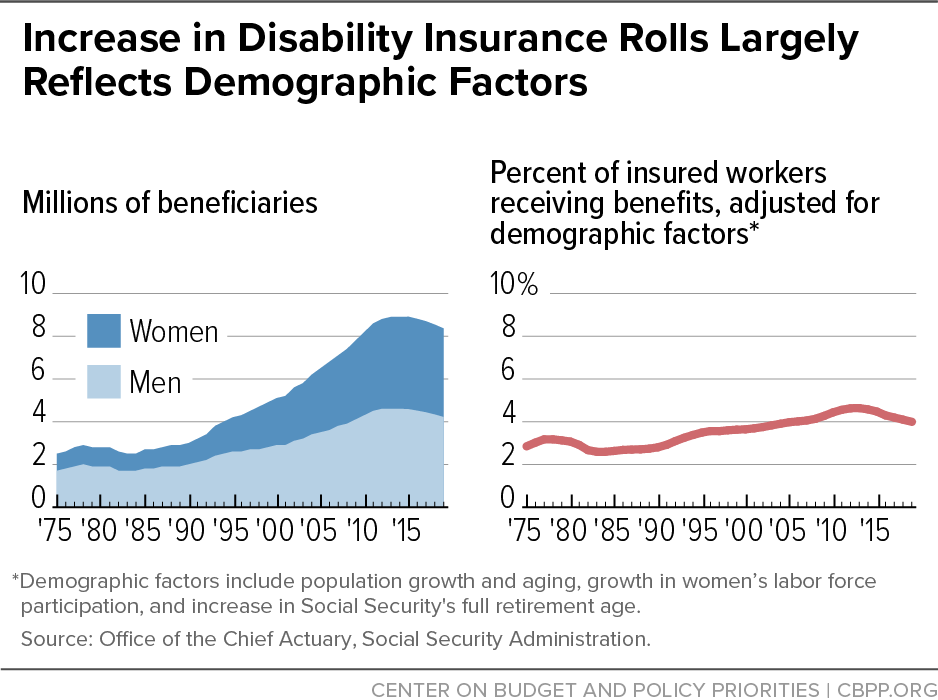 Though SSDI faces a long-term financing gap, its costs have stabilized as the economy has improved and baby boomers receiving SSDI move to Social Security’s retirement program. Still, policymakers will have to strengthen Social Security’s overall financing within the next 15 years.