Social Security provides a foundation of income on which workers can build to plan for their retirement. It also provides valuable social insurance protection to workers who become disabled and to families whose breadwinner dies.

Eighty-five years after President Franklin Roosevelt signed the Social Security Act on August 14, 1935, Social Security remains one of the nation’s most successful, effective, and popular programs.

The risk of disability or premature death is greater than many realize. Some 6 percent of recent entrants to the labor force will die before reaching the full retirement age, and many more will become disabled.

Fact #2: Social Security provides a guaranteed, progressive benefit that keeps up with increases in the cost of living.

Social Security benefits are progressive: they represent a higher proportion of a worker’s previous earnings for workers at lower earnings levels.

Social Security benefits are progressive: they represent a higher proportion of a worker’s previous earnings for workers at lower earnings levels. For example, benefits for a low earner (with 45 percent of the average wage) retiring at age 65 in 2020 replace about half of their prior earnings. But benefits for a high earner (with 160 percent of the average wage) replace about one-quarter of prior earnings, though they are larger in dollar terms than those for the low-wage worker.

Many employers have shifted from offering traditional defined-benefit pension plans, which guarantee a certain benefit level upon retirement, toward defined-contribution plans (such as 401(k)s), which pay a benefit based on a worker’s contributions and the rate of return they earn. Social Security, therefore, will be most workers’ only source of guaranteed retirement income that is not subject to investment risk or financial market fluctuations.

Once someone starts receiving Social Security, their benefits increase to keep pace with inflation, helping to ensure that people do not fall into poverty as they age. In contrast, most private pensions and annuities are not adjusted (or are only partly adjusted) for inflation. 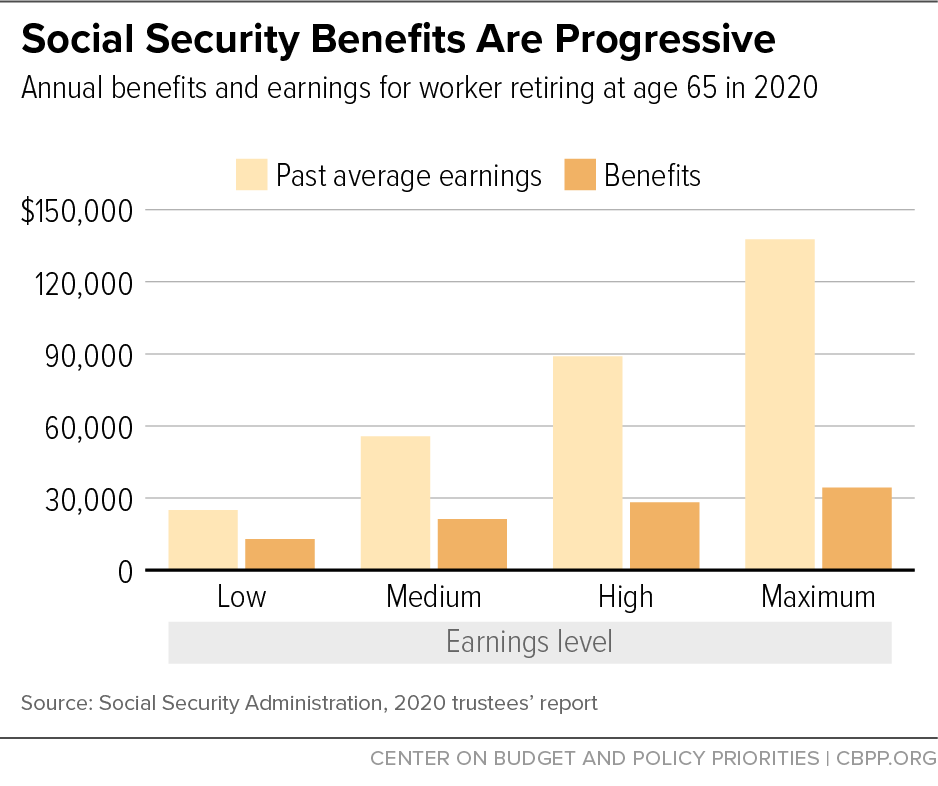 Fact #3: Social Security provides a foundation of retirement protection for nearly every American, and its benefits are not means-tested.

97% of the elderly either receive Social Security or will receive it.

Social Security provides a foundation of retirement protection for people at all earnings levels. It encourages private pensions and personal saving because it isn’t means-tested — in other words, it doesn’t reduce or deny benefits to people whose income or assets exceed a certain level. Social Security provides a higher annual payout than private retirement annuities per dollar contributed because its risk pool is not limited to those who expect to live a long time, no funds leak out in lump-sum payments or bequests, and its administrative costs are much lower.

Indeed, universal participation and the absence of means-testing make Social Security very efficient to administer. Administrative costs amount to only 0.6 percent of annual benefits, far below the percentages for private retirement annuities. Means-testing Social Security would impose significant reporting and processing burdens on both recipients and administrators, undercutting many of those advantages while yielding little savings.

Finally, Social Security’s universal nature ensures its continued popular and political support. Large majorities of Americans say that they don’t mind paying for Social Security because they value it for themselves, their families, and millions of others who rely on it.

Social Security benefits are much more modest than many people realize; the average Social Security retirement benefit in June 2020 was about $1,514 a month, or about $18,170 a year. (The average disabled worker and aged widow received slightly less.) For someone who worked all of their adult life at average earnings and retires at age 65 in 2020, Social Security benefits replace about 40 percent of past earnings. This “replacement rate” will slip to about 35 percent for a medium earner retiring at 65 in the future, chiefly because the full retirement age, which has already risen to 66, and is gradually climbing to 67 over the 2017-2022 period.

Moreover, most retirees enroll in Medicare’s Supplementary Medical Insurance (also known as Medicare Part B) and have Part B premiums deducted from their Social Security checks. As health care costs continue to outpace general inflation, those premiums will take a bigger bite out of their checks.

Social Security benefits are modest by international standards, too. The United States ranks just outside the bottom third of developed countries in the percentage of an average worker’s earnings replaced by the public pension system. 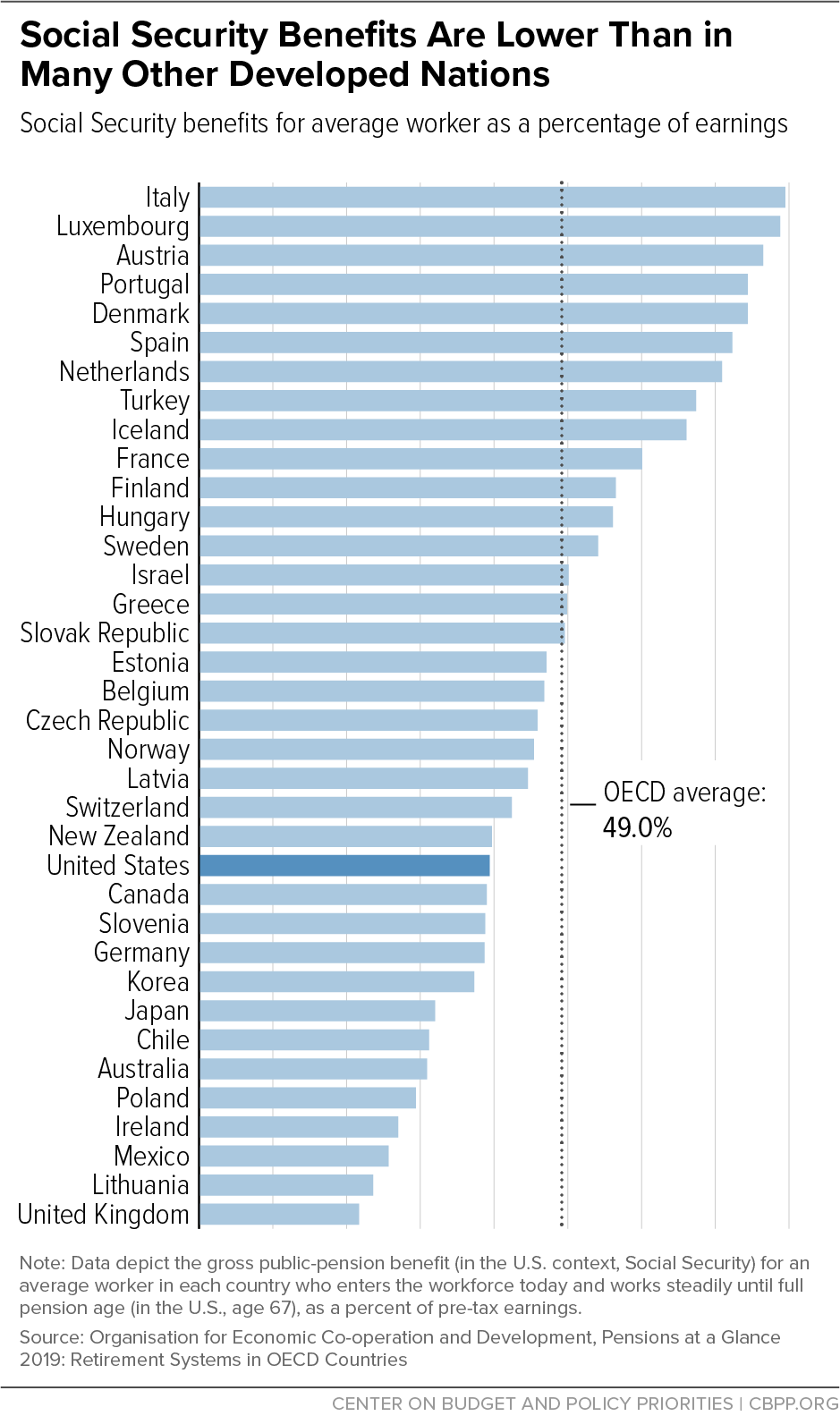 Fact #5: Children have an important stake in Social Security.

Social Security lifted 1.5 million children out of poverty in 2018, as the chart shows. (The figures in the chart use the comprehensive Supplemental Poverty Measure in order to show the full effect of non-cash benefits. These published figures do not correct for underreporting. By the more conventional, cash-only official poverty measure, Social Security lifted 1.2 million children above the poverty line in 2018.) 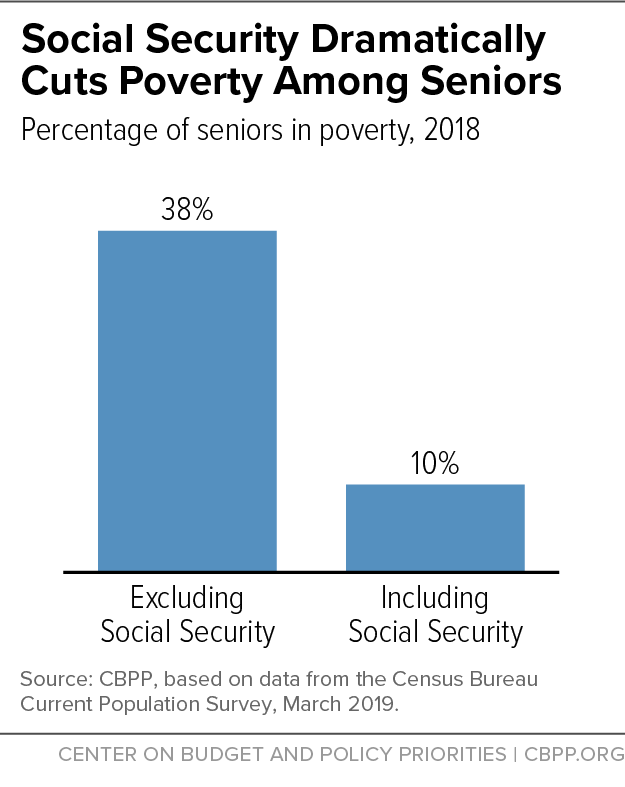 No matter how it is measured, however, it’s clear that Social Security brings millions of elderly Americans out of poverty and dramatically reduces the elderly poverty rate.

Fact #7: Most elderly beneficiaries rely on Social Security for the majority of their income.

Fact #8: Social Security is particularly important for people of color.

Social Security is a particularly important source of income for groups with low earnings and less opportunity to save and earn pensions, including Black and Latino workers and their families, who face higher poverty rates both during their working lives and in old age. The poverty rate among Black and Latino seniors is over 2.5 times as high as for white seniors. There is a significant racial retirement wealth gap, leading seniors of color to face more retirement insecurity than white seniors. African American and Latino workers are less likely to be offered workplace retirement plans and likelier to work in low-wage jobs with little margin for savings. Social Security helps reduce the economic disparities between white seniors and seniors of color.

Social Security’s importance to families of color goes beyond retirement. Black and Latino workers benefit substantially from Social Security because they have higher disability rates and lower lifetime earnings than white workers, on average, and African American workers have higher rates of premature death. Persistent racial disparities in health care access and quality — as well as in access to food, affordable housing, high-quality schools, and economic opportunity — mean African American workers are likelier to become disabled or die before reaching retirement. Latino workers, too, are more likely to become disabled than white workers, and have longer average life expectancies than white workers, which means they have more years to collect retirement benefits. 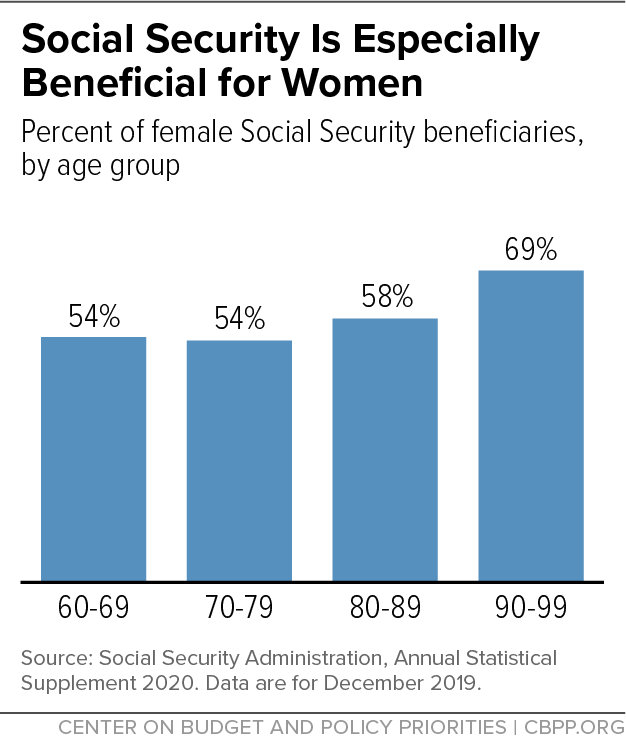 Since the mid-1980s, Social Security has collected more in taxes and other income each year than it pays out in benefits and has amassed combined trust funds of nearly $2.9 trillion, invested in interest-bearing Treasury securities. But Social Security’s costs will grow in coming years as baby boomers retire.

The trustees estimate that, if policymakers took no further action, Social Security’s combined Old-Age and Survivors Insurance (OASI) and Disability Insurance trust funds will be exhausted in 2035. (It is important to understand, however, that the report does not reflect the effects of the COVID-19 pandemic and the resulting recession on the programs’ trust funds, and so doesn’t provide an up-to-date picture of Social Security’s financial status.) After the trust fund reserves are exhausted, even if policymakers took no further action, Social Security could still pay three-fourths of scheduled benefits, relying on Social Security taxes as they are collected. Alarmists who claim that Social Security won’t be around when today’s young workers retire either misunderstand or misrepresent the projections. The long-term gap between Social Security’s projected income and promised benefits is estimated at 1 percent of gross domestic product (GDP) over the next 75 years (and 1.4 percent of GDP in the 75th year).

Social Security Lifts More Americans Above Poverty Than Any Other Program

April 22, 2019
Stay up to date
Receive the latest news and reports from the Center