Americans strongly support Social Security because it allows them to earn critical financial support for themselves and their families not just for retirement, but also in the event of disability or death. 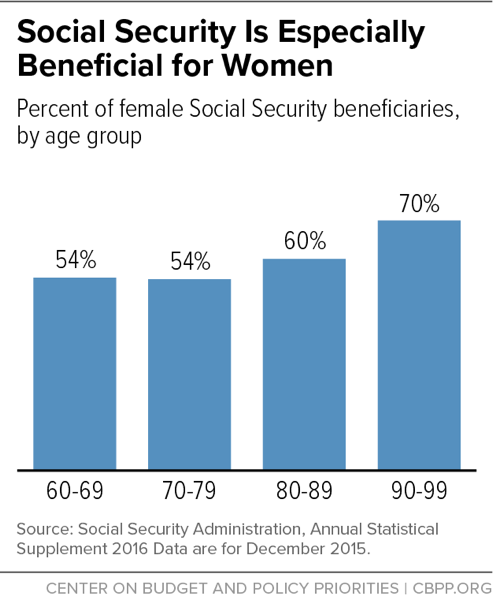 Because they tend to live longer, women also benefit disproportionately from the program’s inflation-protected benefits.  For example, women turning 65 in 2015 are estimated to live, on average, for a little over two more years than men and therefore to receive retirement benefits for longer.

Furthermore, women benefit significantly from Survivor’s Insurance.  In June 2017, women made up 97 percent of Social Security survivor beneficiaries.  That’s both because they are likely to outlive their husbands, and because their husbands are likely to out-earn them. (The surviving spouse receives the higher of her own earned benefit or her spouse's.  Since benefits are based on lifetime earnings, men typically have higher benefits.)

What the 2017 Trustees’ Report Shows About Social Security

April 19, 2022
PreviousIn Case You Missed It…
NextCBO: Severe Harm If Trump Halts Health Cost-Sharing Payments
Stay up to date
Receive the latest news and reports from the Center