Few Disability Insurance Beneficiaries Could Support Themselves by Working

The Social Security Disability Insurance (DI) program provides modest but vital benefits to workers who can no longer do substantial work due to a severe medical impairment.  Lawmakers will need to replenish DI’s trust fund by 2016 and may be tempted to curtail eligibility on the assumption that those affected could support themselves by working.  But a wide variety of evidence suggests that’s not the case. DI not only permits but encourages beneficiaries to work.  The average benefit is only $1,165 a month — barely above the poverty line.  Beneficiaries can earn up to $1,090 a month indefinitely and still collect benefits; for an average beneficiary, that would roughly double his or her income.  Recipients may earn unlimited amounts for a year without jeopardizing their benefits, while they test their ability to return to work.  During the next three years, they may automatically return to the DI rolls if their monthly earnings sink below $1,090.  Beneficiaries who return to work and earn more than $1,090 a month may continue to receive Medicare coverage for up to 7½ years after their cash benefits stop. Despite these and other work incentives, most beneficiaries do not have earnings.  One careful study found that only one-fifth of beneficiaries aged 45 to 64 — who dominate the DI rolls — have any earnings two years after application, and even fewer have significant earnings.  (See figure.) Even those who apply for benefits and are rejected — because they don’t meet DI’s strict eligibility criteria — fare very poorly in the labor market.  Barely half have any earnings two years after application, and the average amount earned is very low.  In contrast, workers of the same age who don’t seek DI benefits are likely to work and have substantial earnings. Economic analyses consistently find that, while receipt of DI somewhat reduces employment, its effect on earnings is small.  One widely cited study estimates that “marginal” beneficiaries — those who might plausibly have been denied (and who are thus healthier than the average beneficiary) — would earn only $3,800 to $4,600 more annually if they were not receiving DI benefits. The Social Security Administration has also undertaken several demonstration projects over the years to test new ways to encourage DI beneficiaries to return to work, but they have shown limited results or proved not cost-effective.  “This large body of research has demonstrated the enormous difficulty of helping and encouraging people with chronic health conditions and disabilities to work and earn enough to become self-sufficient,” concludes a recent assessment.  None of the demonstrations has been found to have “the potential to lead to substantial caseload reductions.” In short, there’s no reason to think that many DI beneficiaries could support themselves by working if lawmakers make deep cuts to the program.
Image 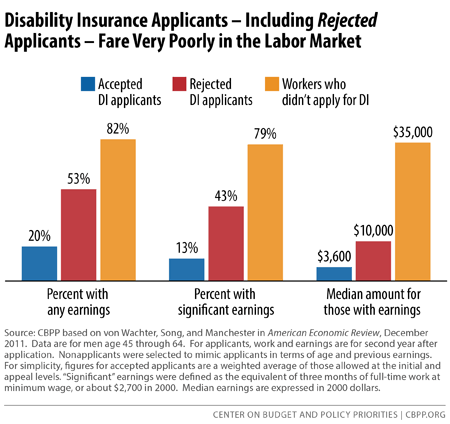