Social Security Disability Insurance (DI) — which pays modest but vital benefits to people with severe and long-lasting medical impairments who can no longer support themselves by working — is especially important to workers who’ve earned only a high-school diploma, or less (see graph). New research has identified several reasons why this group is far likelier to receive DI benefits than those who’ve gone to college. 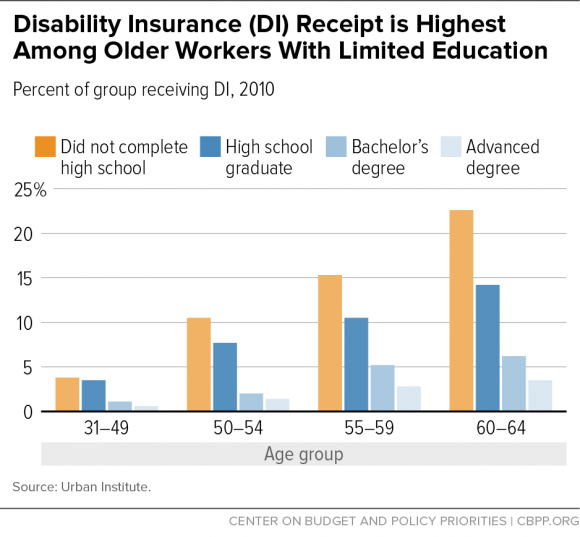 These associations help to explain why DI receipt varies geographically and is highest in areas with lower educational attainment.

In good news, the authors note that overall educational attainment is rising; there will be fewer high-school dropouts, and more college graduates, in the future pool of workers who might qualify for DI. But they also find distressing signs that health and wealth gaps by level of education are widening, not shrinking.

This new paper buttresses a point we’ve made elsewhere: that government benefits such as Social Security, refundable tax credits, and health insurance under the Affordable Care Act are disproportionately important to working-class adults who lack college degrees.