Not So Hale and Hearty: Explaining Disability Rates in One Alabama County

News stories and bloggers continue to point to Hale County, Alabama, as the prototypical example of a place where many residents receive federal disability benefits.  But, Hale County is anything but typical.

We think that about one in five Hale County residents between 20 and 64 receives disability benefits from Social Security or Supplemental Security Income, based on data here and here. That’s far above the national average of about one in 16.  We’ve previously pointed out that disability receipt varies by geography.  Several facts make Hale County an outlier: 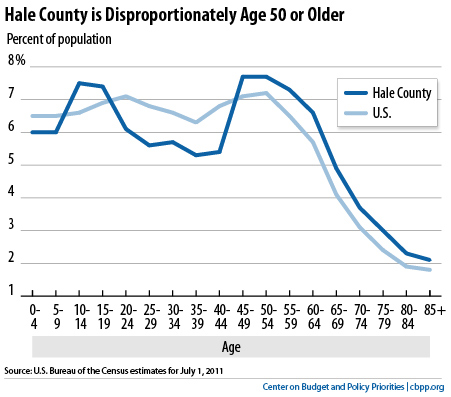 The Robert Wood Johnson Foundation ranks Hale 65th out of 67 counties in Alabama — and even further behind national norms — on a variety of health measures.  Hale’s statistics on premature death, lack of health insurance, the number of doctors and dentists per capita, motor vehicle crashes, and even access to safe drinking water are bleak.

These facts show not just how untypical Hale County is — but how important the disability programs are in providing a safety net for some of our most vulnerable citizens.

The State of Disability

The Facts About Disability Insurance

Ruffing: Pending Insolvency of Disability Insurance Expected and Should Be Addressed

March 20, 2013
PreviousProposal to Delay DSH Cuts No Reason Not to Expand Medicaid
NextTax Day Roundup
Stay up to date
Receive the latest news and reports from the Center