To accompany our series of charts on federal tax issues, these charts put state taxes — and the services they support — into context.

State taxes help lay the foundation for economic opportunity and broad prosperity for families, businesses, and communities by funding the public investments essential for long-term economic growth. More than half of state tax dollars support education (K-12 and beyond) and health care, as our first chart shows. State tax dollars also fund other critical services such as transportation, public assistance, corrections, care for residents with disabilities, police, state parks, and general aid to local governments.

Despite the importance of these services, many states have reduced their revenues by cutting taxes. These tax cuts, which have mainly benefited the highest-income households and profitable corporations, typically haven’t produced the promised economic benefits.  And they’ve squandered resources that states could have invested in broadly shared opportunity.

Tax cuts create very real — and often harmful — trade-offs. For example, seven of the 12 states that have made the deepest cuts in general funding per K-12 student since the Great Recession hit have also cut income tax rates, as our second chart shows. These tax cuts cost revenues that states could have used to reverse their education cuts and invest in promising reforms. As recent teacher strikes in several states have underscored, tax cuts have limited teacher pay and school funding, contributing to serious shortages of qualified teachers and widespread dissatisfaction among teachers and other school employees.

Income tax cuts also make state tax systems less fair by increasing a state’s reliance on sales and other taxes. As our fourth chart shows, low-income families pay much more of their income in state sales taxes than high-income families do, whereas income taxes are based on the ability to pay. State and local taxes as a whole push many families into — or deeper into — poverty.

The new federal tax law will worsen inequality by delivering its biggest benefits to those at the top. As the map shows, in virtually every state, the top 1 percent will receive larger total tax cuts than the bottom 60 percent. States should recapture some of the law’s tilted tax breaks by raising taxes on high-income households and profitable corporations and by decoupling their tax codes from the most egregious new federal tax breaks, such as a cut in the estate tax that exempts the first $22 million in an estate’s value from the tax. 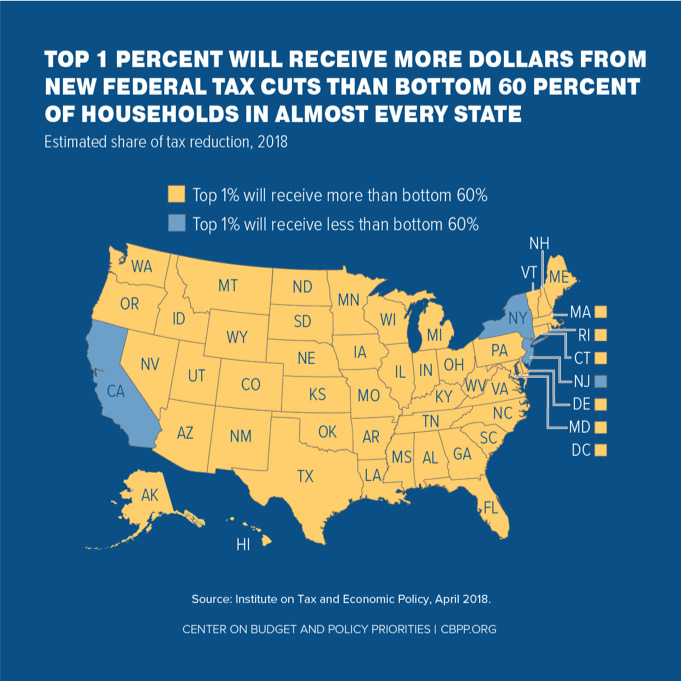 Also, the new law’s change in the inflation measure used to adjust tax brackets and other elements of the federal tax code each year will erode the value of most state Earned Income Tax Credits (EITCs) as well as the federal EITC, due to links between the federal and state tax codes. By 2027, as our final chart shows, a married couple in a working family, with more than two children, earning $40,000 and living in a state with an EITC worth 20 percent of the federal credit will face a $412 decline in the value of their combined federal and state EITCs. That money could have gone to paying bills, child care, car repairs, books and living expenses for a child about to go to college, or many other needs.

The 29 states plus Washington, D.C. with their own EITC can respond to the federal change by expanding their credits.   States without an EITC should consider adopting one to help offset the hit to low- and moderate-income working families.

On Equal Pay Day, a Look at How EITCs Help Women in Every State

January 22, 2018
Previous5 Reasons Why the House Balanced Budget Amendment Is a Bad Idea
NextMandatory Work Programs Are Costly, Have Limited Long-Term Impact
Stay up to date
Receive the latest news and reports from the Center