Media coverage of possible teacher strikes in Arizona and Oklahoma, following one in West Virginia, has often overlooked an important contributing factor in those states: excessive state tax cuts that have shrunk state revenues and thereby made it harder for states to devote adequate resources to education. Reductions in state education funding largely due to tax cuts have limited pay and other resources for teachers. And both Arizona and Oklahoma have supermajority requirements to raise revenue, which tend to lock in tax cuts once they’ve been enacted and make it difficult for these states to address shortfalls in education funding.

Consider the following: Arizona and Oklahoma both cut taxes sharply in the years before the Great Recession of 2007 to 2009, and then continued to cut taxes after that.

This tax cutting squeezed state general fund dollars — the amount available to lawmakers to fund schools and other state priorities. General fund dollars as a share of personal income are down 30 percent in Arizona, and 35 percent in Oklahoma, since 2006 (see graphic). The declines in these two states are among the five deepest in the country. 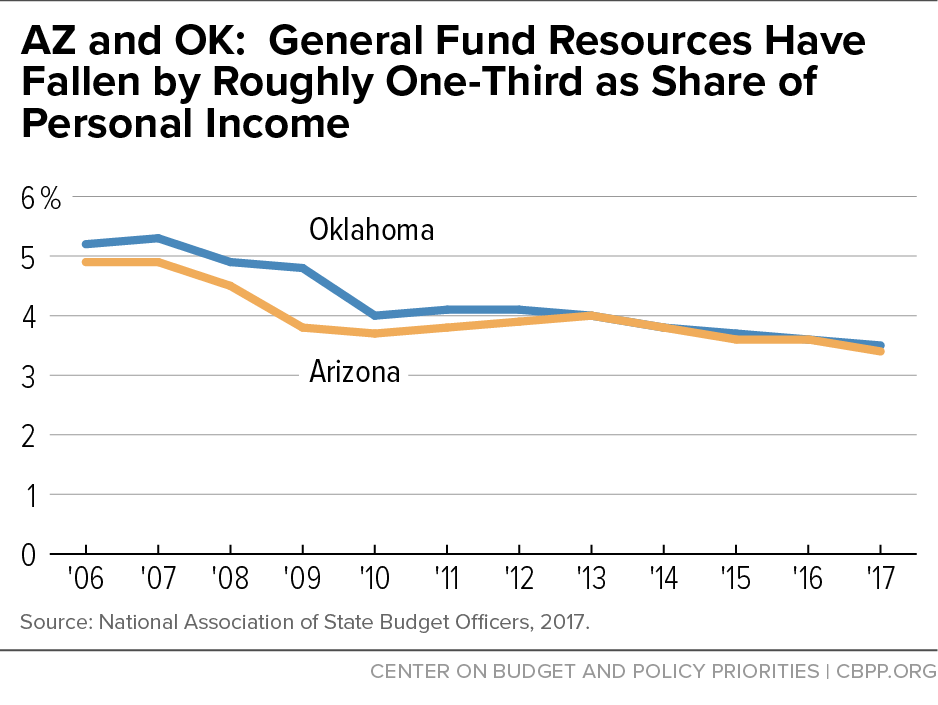 That’s made funding schools adequately considerably harder. Arizona’s school system is the nation’s second-least adequately funded, while Oklahoma’s is the fifth-least adequately funded, according to the Education Law Center (after adjusting for enrollment, regional wage variations, and other factors that affect costs in different areas). Most of the other worst-funded school systems, including those in Idaho, North Carolina, and Mississippi, are also in states that have cut taxes heavily in recent years.

Further, while most states have gradually restored the school funding that they cut when the Great Recession hit, Arizona and Oklahoma have not come close. State “formula” funding for schools — the major form of state funding in both states — is down 28 percent per student in Oklahoma and 14 percent in Arizona since the recession hit in the 2007-2008 school year, after adjusting for inflation.

Large state funding cuts have made improving pay particularly challenging, since salaries and other compensation for teachers and other education workers comprise the majority of K-12 education spending in Arizona and Oklahoma. Most states have reduced average teacher pay since 2010, after adjusting for inflation, but Arizona and Oklahoma are among the deepest-cutting states. The average teacher salary has fallen nearly 10 percent in Arizona and 15 percent in Oklahoma since 2010 in inflation-adjusted terms. In these states, low teacher pay and dissatisfaction over inadequate school resources have led to growing protests by teachers and other education personnel.

Arizona and Oklahoma also face daunting teacher shortages, in large part due to low pay and inadequate resources for schools. In Arizona, over 60 percent of teacher positions are either vacant or filled by people who don’t meet standard teaching requirements, according to the School Personnel Administrators Association. In Oklahoma, emergency teacher certifications — issued when fully qualified teachers aren’t available — have risen markedly. The Norman Public School District, for example, has issued more emergency certifications this year than all Oklahoma districts combined issued five years ago. In addition, more than 90 Oklahoma districts have shifted to four-day school weeks, partly to retain teachers who can use the extra day to work at another job.

Perhaps most troubling, Arizona and Oklahoma face daunting obstacles to raising the revenue needed to address these problems because their constitutions require supermajority votes of both legislative houses to raise taxes: a two-thirds vote in Arizona and a three-fourths vote (or a vote of the people) in Oklahoma. Recently in Oklahoma, roughly two-thirds of lawmakers — a group dominated by Republicans — approved a proposal to raise hundreds of millions of dollars and boost teacher pay for the first time in ten years. But a three-fourths vote is needed, and a minority of legislators killed the measure.

To do right by their teachers and students, these states will need to move away from the focus on ever greater tax cuts that has contributed to their current problems.

February 27, 2018
PreviousIn Case You Missed It…
NextSupermajority Requirement Stymied Sensible Tax Reforms in Oklahoma
Stay up to date
Receive the latest news and reports from the Center