State tax cut proponents often cite North Carolina as a model since its economy — unlike those of most states that have cut income tax rates deeply in recent years — is growing in line with the nation as a whole since cutting taxes. But even in North Carolina, the evidence is weak that the tax cuts caused the economy to surge.

In the years before the tax cuts took effect in 2014, North Carolina’s economy generally grew faster than the national economy and in line with neighboring states, even though North Carolina had easily the highest personal income tax rates in the region and much higher rates than it has today.

Between September 2001 (when the state raised income taxes) and December 2013 (the month before the state cut them), North Carolina’s job growth of 5.8 percent easily outpaced the country’s 4.2 percent rate. The state’s share of jobs in the region – including North Carolina and its four neighbors – grew slightly, from 24.4 percent to 24.6 percent. Other measures of economic performance, such as gross domestic product (GDP) and personal income, and other time periods before the tax cuts took effect, generally show North Carolina growing more strongly than the nation as a whole and in line with the rest of the region, despite the state’s higher income tax rates.

Since North Carolina enacted its tax cuts, however, Georgia and South Carolina have outpaced its growth in GDP and private-sector jobs (see chart), putting the state in the middle of the pack among its neighbors, even though none of the others have slashed income tax rates. (One neighbor, Tennessee, doesn’t have a broad income tax.) And North Carolina has lagged behind the nation’s growth in private-sector jobs and GDP since the tax cuts took effect. 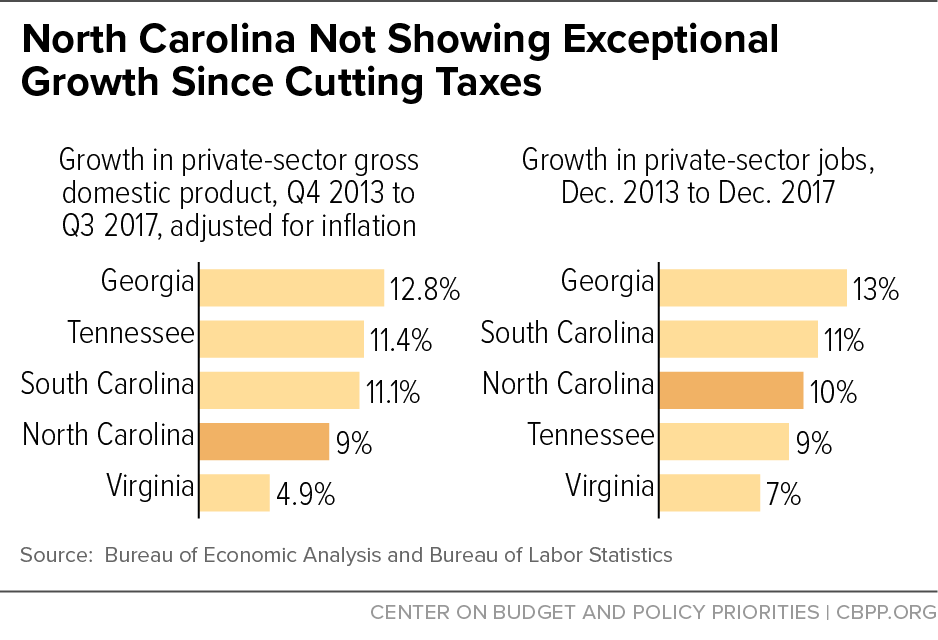 That income tax cuts didn’t fuel an economic boom in North Carolina is hardly surprising. States that tried this approach in the 1990s and early 2000s didn’t see their economies surge either, and most academic studies find no correlation between lower state personal income taxes and economic growth.

Moreover, North Carolina is hurting its future by weakening its education system and other public investments that underlie economic vitality over the long run. Over the last decade, North Carolina has cut per-student funding for K-12 schools and higher education by 7.9 percent and 15.9 percent, respectively, after adjusting for inflation. The tax cuts, which will cost the state $3.5 billion a year, make it nearly impossible for North Carolina to restore these education cuts, let alone make new investments — such as expanding high-quality preschool — that would better position the state for the coming decades.