Borrowing — by issuing bonds — is a tried-and-true way for states and local governments to finance the cost of building and maintaining infrastructure. Projects financed with bonds can give a state’s economy both a short- and long-term boost.

State and local investments in schools, roads, hospitals, and other infrastructure provide the foundation for a vibrant economy and high quality of life.  States and localities borrow to pay for infrastructure, rather than use annual tax collections and other revenues, for sound reasons.  Public buildings, roads, and bridges are used for decades but entail large upfront costs; borrowing enables the state to spread out those costs.  As a result, taxpayers who will use the infrastructure in the future help pay for it, which promotes intergenerational equity.  Borrowing also makes infrastructure projects more affordable by reducing the pressure on a state’s budget in any given year.

Almost all state and local bond debt is long-term debt incurred to pay for capital expenditures — primarily infrastructure projects such as roads and bridges, schools, water systems, and hospitals — not to cover operating expenses.

Almost all state and local bond debt is long-term debt incurred to pay for capital expenditures — primarily infrastructure projects such as roads and bridges, schools, water systems, and hospitals — not to cover operating expenses.[1]  (See figure.)

States typically prohibit the use of bond proceeds to fund operating expenses, although that has occurred in a few instances.  The vast majority (99 percent) of state and local debt is long term, but a few states also issue short-term “revenue anticipation notes” to help them manage their cash flow.  This type of debt must be repaid within the fiscal year. 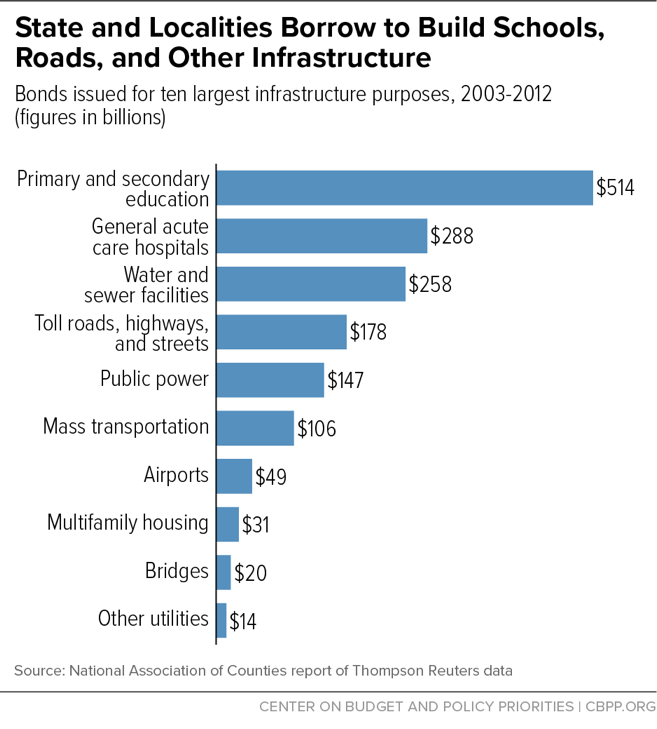 How much a state or locality borrows should reflect local infrastructure needs, the current cost of debt, and expected revenue growth.  With the difficulties of the Great Recession not forgotten, some states and localities are hesitant to take on more debt.  Conditions for borrowing have rarely been better, however, and needs are great.

Interest payments on debt averaged just 3.1 percent of current spending in 2015, the lowest level since Census began tracking this data in 1977.

Safeguards Can Lessen Risk of Taking on Too Much Debt

States use several methods to limit their indebtedness, usually by setting a cap on total debt as a share of the state’s economy or a cap on annual interest payments as a share of state revenue.

States and localities rarely fail to repay bondholders, but there is some risk that they might borrow so heavily that their debt obligations begin to crowd out other parts of the budget.  Because each decision to issue a bond will affect the state for decades, guidelines are needed to prevent one generation’s decisions from pre-empting those of the next.

States use several methods to limit their indebtedness, usually by setting a cap on total debt as a share of the state’s economy or a cap on annual interest payments as a share of state revenues.  (Some states, however, have no such limits; on the other hand, a few states are prohibited from issuing general obligation debt.)  Because policymakers need flexibility if the state faces unusual capital needs resulting from natural disasters, aging infrastructure, or other challenges, these limits should be guidelines rather than rigid caps.  States and localities should also regularly perform a formal debt affordability analysis and make this information public.

[1] This paper focuses on bonded debt — borrowed funds used mainly for capital needs. States also incur other long-term obligations that are sometimes considered debt, such as pensions, “other post-employment benefits” such as health benefits for retirees, and federal loans to help cover unemployment insurance benefits during recessions.