State budget decisions should matter to all of us. State budgets affect the quality of life of workers, families, and communities across the nation ― they decide the fate of roads, schools, health care, public transportation, clean air and water, and much more. Every year, state policymakers make critical choices about how to provide these services and how to ensure that state revenues are adequate to fund them.

In addition to spending their own funds, states play an important role in implementing federal programs and deciding how to spend federal funds ― for example, designing the health services provided under Medicaid, or determining where to invest federal highway and public transit funds. (Both programs require states to provide a share of the funding.) And state budgets are used to distribute funds, from housing to health care to public safety, to support local communities.

Budgets can change, and even save, lives. A state’s budget shows its priorities. State budgets play a critical role in addressing residents’ needs and creating opportunities for families and communities to thrive. State budgets can also reduce long-standing racial and economic disparities in access to jobs, housing, and education; many advocates say the budget is a “moral document.” This also means that everyone has a stake in state budget outcomes. 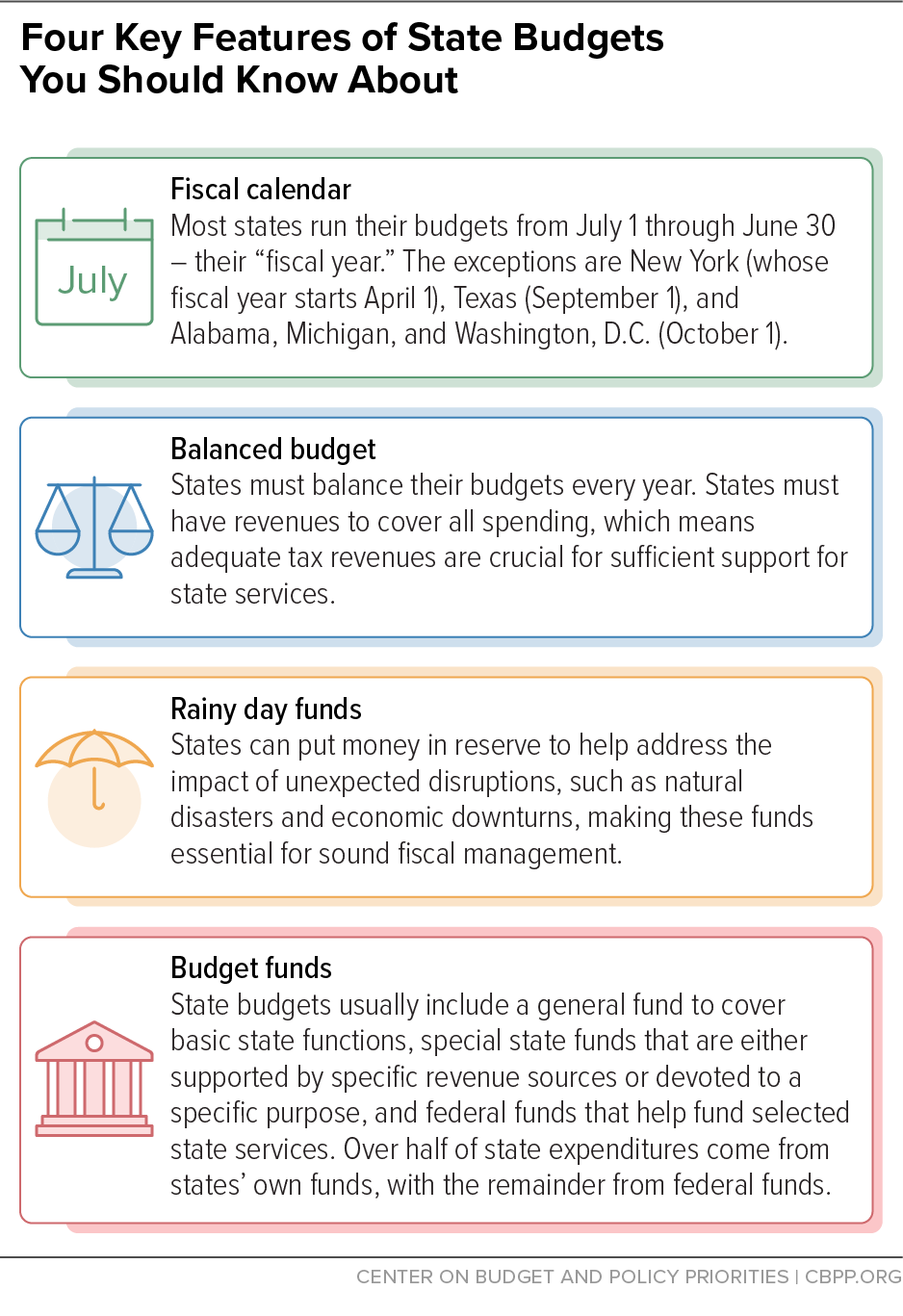 How Are State Budgets Created?

A state’s budget is passed every year, or every other year in states with a two-year or “biennial” budget. The budget process occurs during most states’ legislative session, which usually begins in January. The process starts when the governor submits a proposed budget (in some states this happens before the start of the legislative session). Then it proceeds to the legislature, which holds the lion’s share of authority over the budget’s final form. Over a few months, legislators review and modify the governor’s proposal and add additional tax and spending measures as they see fit. All states allow the public to weigh in on the budget with their priorities along the way. 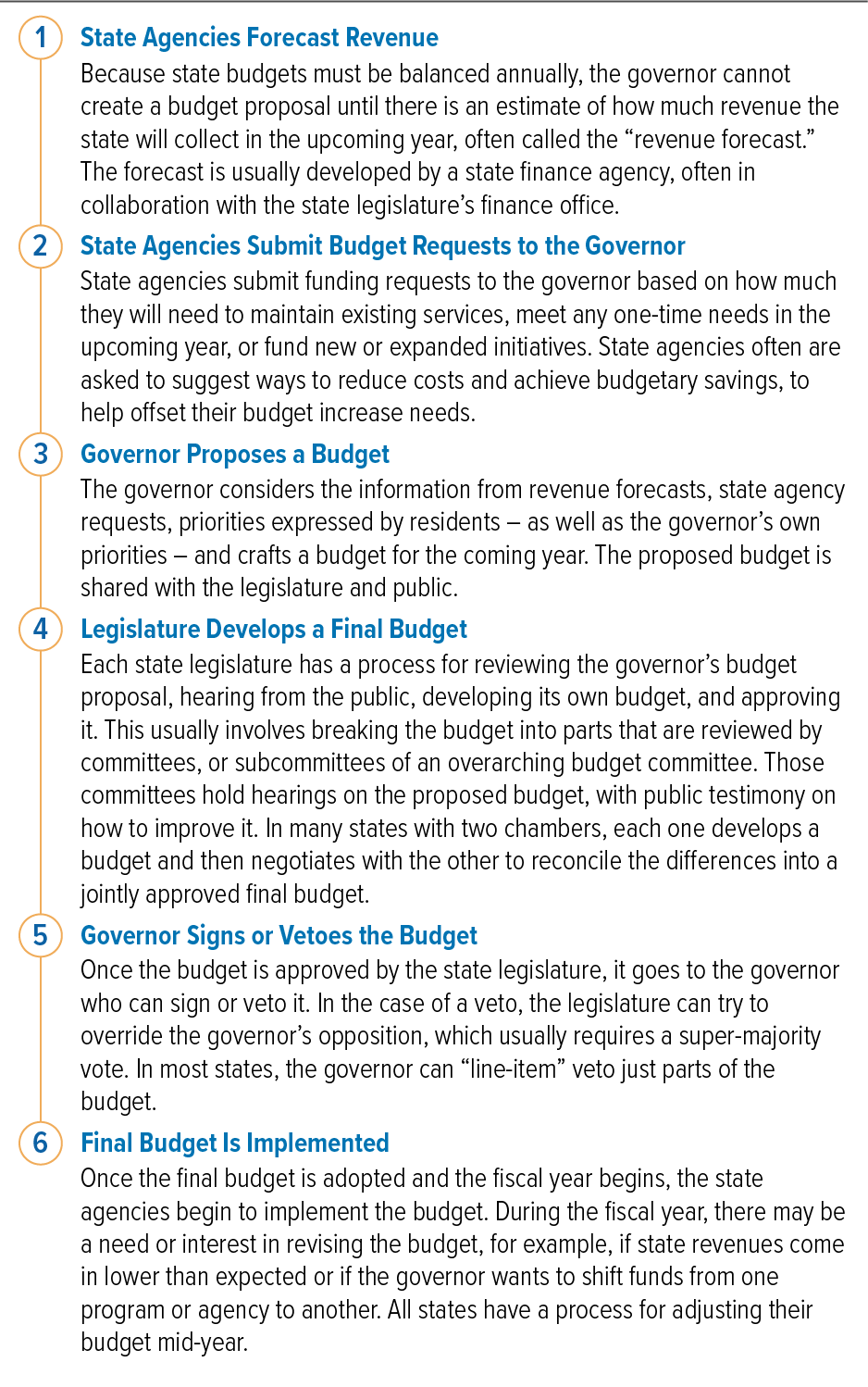 While the legislative review is the most visible part of the state budget process, the complete budget-writing endeavor spans a year. This means that while efforts to shape state budget choices should follow the budget cycle, they can happen at any time.

Where Does the Money for State Budgets Come From?

The main source of state revenue is state taxes, which consist primarily of personal income taxes and general sales taxes. States also collect smaller amounts of revenue from corporate income taxes, “selective” sales taxes on items such as motor fuel and tobacco, and statewide property taxes, although in most states the property tax is levied only by local governments.

In addition to taxes, states raise revenue through fees (such as for a driver’s license), fines for violating state laws, charges for services (such as park entrance fees), lotteries, and other sources.

What Do States Spend Their Money On?

Across the nation, over half of what states spend goes to education (pre-K-12 and college) and health care. That funding pays for teachers and other staff, classroom technology and supplies, and after-school activities. It provides affordable, quality health insurance to workers, children, and families who might otherwise go without or be forced to rely on costly emergency care. States also fund a wide variety of other services, such as transportation, corrections, pensions and health benefits for public employees, care for people with mental health conditions and developmental disabilities, assistance to low-income families, economic development, environmental protection, state police, parks and recreation, and aid to local governments.

How to Participate in Your State’s Budget Process

Public participation in the budget process can make a difference. Advocates — whether individuals or organizations — can and should share their priorities with the governor’s office and members of the state legislature before and during the formal budget process.

While the governor is preparing the budget proposal, residents can contact the governor’s office to voice support for programs or initiatives that rely on state funding. Residents can also ensure that their voices are heard by testifying at public hearings offered by states’ legislative budget committees.

Writing, calling, and emailing legislators, including your own representative and those serving on the budget committees, regarding a program or initiative is another effective method.

The final budget negotiations are key for advocacy, lobbying, and engaging legislators and the public. This is a critical opportunity to tap into your local advocacy organizations and meet with legislators about items in the budget that are important to you.

January 16, 2018
Stay up to date
Receive the latest news and reports from the Center