Tax cut proponents claim that North Carolina’s tax cutting is a model for other states that want to boost their economies, but the tax cuts not only produced no economic surge and set the stage for large budget deficits to come, they also worsened racial wealth inequities.

North Carolina already has dramatic racial inequities, partly because economic conditions continue to reinforce the state’s legacy of historical racism. The tax cuts made those inequities worse. That’s because they’re heavily skewed to the wealthy, who tend to be white, and do little for the poor, who are more likely to be African American. 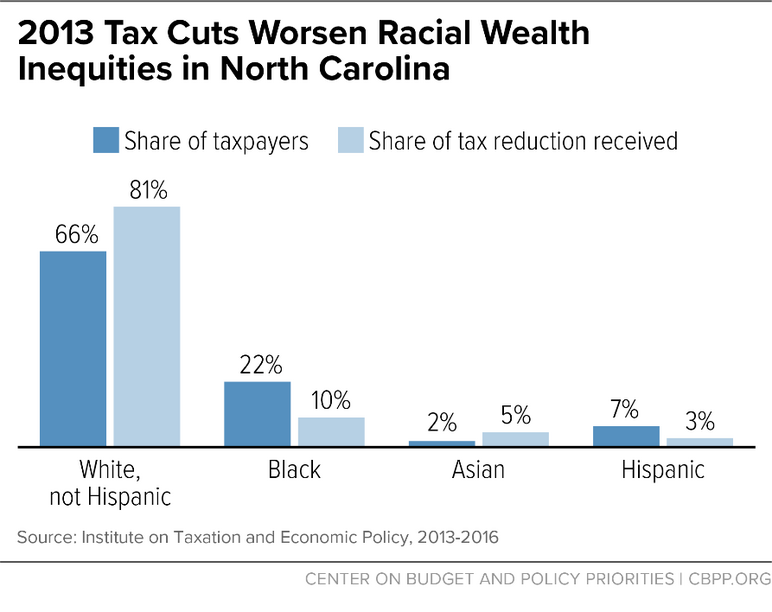 The top 1 percent of North Carolinians are getting about $21,780 in average tax breaks per year — 59 times the average break for people in the middle fifth of the income scale and 1,361 times the average break for people in the lowest fifth, the Institute on Taxation and Economic Policy found in its analysis of the 2013 tax changes. The tax cuts will reduce the taxes of the highest-income North Carolinians by 1.5 percent of their income on average, but by just 0.1 percent of the income of the lowest-income North Carolinians, or $16 on average.

Because they’re so lopsided, the tax cuts will shift the racial component of who pays state taxes. While comprising only two-thirds of taxpayers, white North Carolinians received 81 percent of the tax cuts. At the same time, black North Carolinians comprise 22 percent of state taxpayers, but they received only 10 percent of the tax cuts. (See chart.) As such, black people now pay a larger share of state taxes than before, while white people pay a smaller share. People of Hispanic or Latino heritage also pay a larger share than before, while people of Asian heritage pay somewhat less.

This shift has added to the barriers that African American and Latino North Carolinians face in trying to succeed in today’s economy. While failing to boost the economy and leaving the state facing looming fiscal instability, the tax cuts worsened North Carolina’s racial inequities at a time when states should be working deliberately to undo these inequities and build a future in which everyone can reach their potential.