A requirement in some states that tax-raising legislation pass only with supermajorities in each house can limit the ability of state lawmakers to promote broad-based prosperity. Oklahoma’s supermajority requirement, among the nation’s strictest, caused the defeat earlier this year of much-needed tax reforms that would have begun to address deep cuts to education, health, and infrastructure.

Oklahoma requires three-fourths in both houses, plus the governor, to approve any bill that raises revenues. That’s the highest percentage requirement of any state, tied with Arkansas and Michigan (though, in those two states, fewer types of taxes trigger the requirement).

Oklahoma cut taxes in good economic times but, due to its supermajority requirement, it has struggled to raise taxes when it has needed to. Oklahoma’s state and local taxes as a percentage of the economy have fallen significantly since 1990 (see chart), leaving it with the fifth-lowest percentage of all states as of 2015. 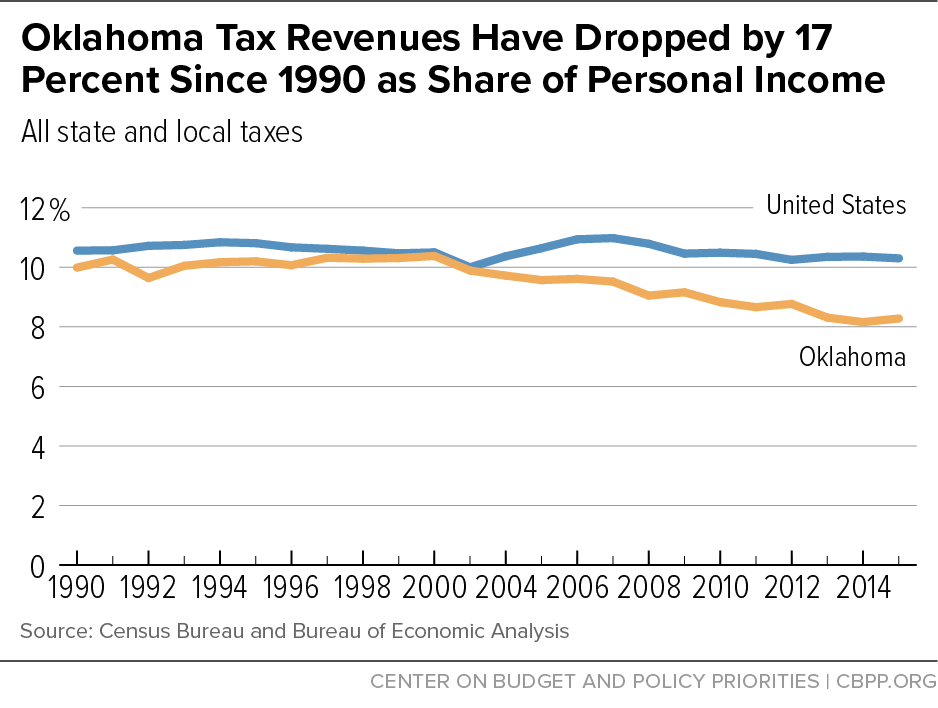 That’s made it harder for the state to maintain schools, roads, and other key investments. Oklahoma has cut support deeply for K-12 education, higher education, Medicaid, and other services over the past ten years. State spending has fallen by 18 percent since 2009, after adjusting for inflation. (This excludes federal stimulus money and spending that’s come out of Oklahoma’s “rainy day” fund). Many school districts can only afford to operate on a four-day week.

In January, a bipartisan coalition of civic and business leaders came together to propose Step Up Oklahoma, a plan to right the state’s fiscal ship by making long-overdue tax reforms and lowering the supermajority requirement from 75 percent to 60 – a step in the right direction.

Almost two-thirds of lawmakers approved the plan in February but, due to the three-fourths requirement, it fell 13 votes short. Consequently, Governor Mary Fallin was forced to enact cuts to all state agencies through June 30. House Speaker Pro Tempore Harold Wright expressed frustration that "it has been impossible to pass necessary revenue measures to provide for adequate core services in Oklahoma: roads and bridges, public safety, education, public health and corrections."

Supermajority requirements limit a state’s ability to invest in schools, higher education, and health care. Other states that are contemplating supermajority requirements, such as Florida, should instead focus more on making proven investments in economic growth, including education, health, and public infrastructure projects to create jobs; in boosting household income; and in repealing tax breaks that have outlived their usefulness.

August 23, 2017
PreviousState Tax Cuts: A Key Factor in AZ, OK Teacher Pay Crises
NextMost SNAP Participants Move In and Out of Work: An Animated Look
Stay up to date
Receive the latest news and reports from the Center