To accompany our series of federal tax charts, here are six charts putting state taxes — and the services they support — into context.

States provide many services that help form the foundation for thriving and healthy families, businesses, and communities and are essential for the nation’s long-term economic growth. More than half of state tax dollars support education (K-12 and higher education) and health care, as the chart below shows. State tax dollars also fund other critical services such as transportation, public assistance, corrections, care for residents with disabilities, police, state parks, and general aid to local governments.

Many of these public investments are at risk: as the next chart shows, two-thirds of states face revenue shortfalls in 2017 and 2018. (Also, proposals from President Trump and congressional Republicans could seriously cut federal grants to states and localities, as our report explains.)

The causes of state revenue shortfalls include tax cuts, falling energy prices, slower stock market growth, and slower-than-average sales tax collections. While some of these factors are beyond states’ control, states can avoid costly income tax cuts that require big trade-offs. Five of the eight states that have made the deepest cuts in general funding per K-12 student since the Great Recession hit have also cut income tax rates, as the chart below shows. These tax cuts eliminated revenue that could have helped reverse the K-12 cuts and invest in promising education reforms.

Moreover, both research and the experiences of big tax-cutting states contradict claims that cutting income taxes significantly boosts economic growth. In fact, Kansas’ experience has been just the opposite, as the graph below shows.

Income tax cuts also make state tax systems less fair by increasing a state’s reliance on sales and other taxes. As the chart below shows, low-income families pay much more of their income in state sales taxes than high-income families do, whereas income taxes are based on the ability to pay. State and local taxes on a whole push many families into — or deeper into — poverty.

A state Earned Income Tax Credit (EITC) is a sensible way to ease the impact of state and local taxes on working families with low incomes, letting them keep more of what they earn to make ends meet. Twenty-six states and Washington, D.C., have their own EITCs, as the map below shows. These credits build on the federal EITC’s proven effectiveness in keeping families working, reducing hardship, and putting children on a better path in life. States can boost their future economic prospects by enacting or expanding an EITC. 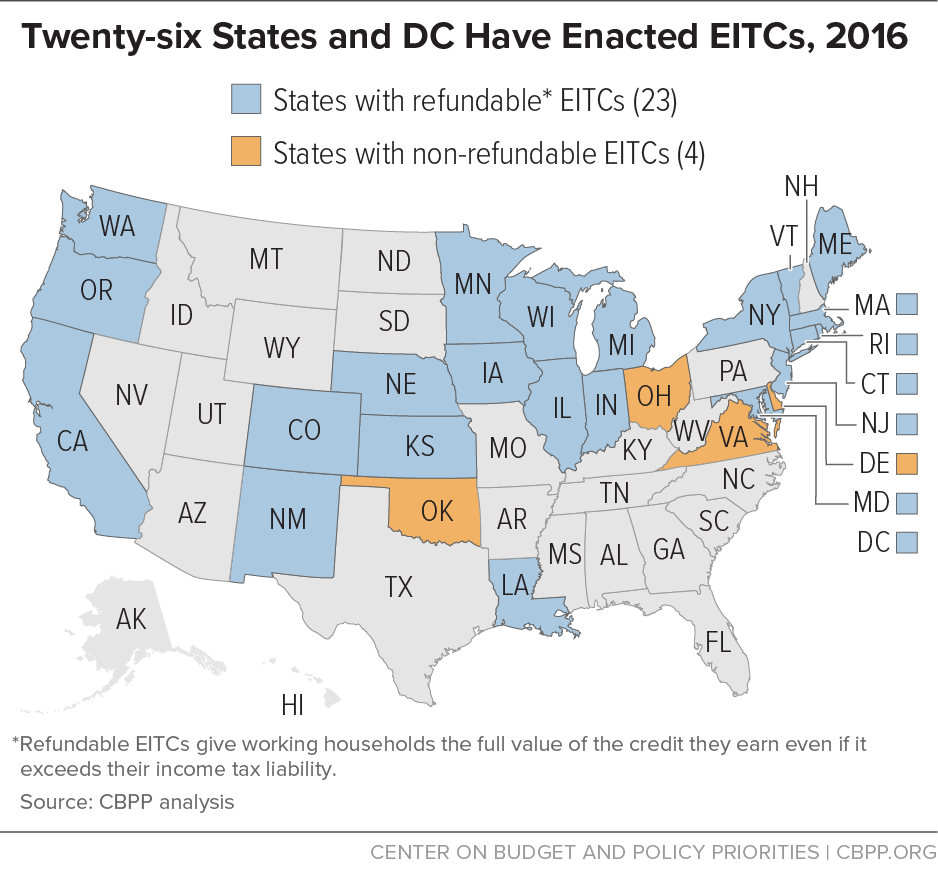