State taxes fund community assets such as K-12 schools and higher education, health care, infrastructure, and family support programs — all of which expand opportunity, limit hardship, and promote a broadly shared prosperity. Over the last two years, the investments state taxes make possible have helped mitigate the worst of the COVID-19 pandemic’s impacts. Adequate state revenues have always been crucial for the well-being of families and communities but the pandemic, like the Great Recession over a decade ago, has shown how crucial state revenues are to the public good.

After the Great Recession hit, federal policymakers provided some fiscal aid to states, but it was undersized and ended too soon, leaving the economy weaker for longer than was necessary. Many states also responded with misguided tax cuts, especially costly and regressive cuts to personal and corporate income taxes that further tilted state tax systems toward households and corporations already doing very well. Together, these factors led to harmful cuts in public priorities, which still have lasting consequences today. 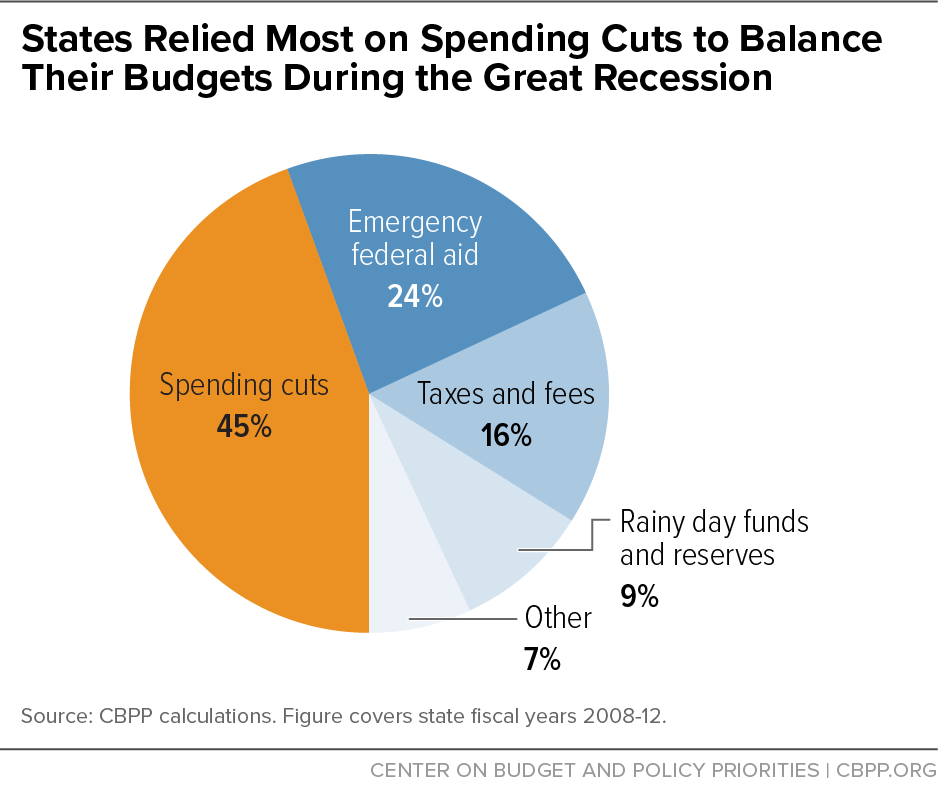 Many federal policymakers took those lessons to heart. The federal response to the pandemic and recession was broad in its reach and innovative in its approaches. For example, the American Rescue Plan targeted aid to child care, eviction prevention, and other services to prevent preexisting inequities from worsening. It also provided $350 billion in flexible aid (known as State and Local Fiscal Recovery Funds, or FRF) for states, localities, tribal nations, and territories.

As of December 2021, most states and territories had allocated a significant share of their FRF. (Data on FRF allocations by local governments are more dated but suggest that they have allocated a large share of their FRF.) States used the funds to invest in health care, mental health, education, economic development, housing, and cash and food assistance, among other uses. The FRF also allowed states to reverse earlier cuts, and helped teachers, bus drivers, child support workers, and other public employees get back to work.

Note: The American Rescue Plan gave states $197.8 billion in Fiscal Recovery Funds to combat the effects of the COVID-19 pandemic.

Unfortunately, many states are also making the same kinds of counterproductive fiscal choices that followed the last crisis. Proposals for costly, permanent tax cuts would primarily benefit corporations and people with greater wealth, who are predominantly white. Some proposals to phase in tax cuts would also undermine long-term fiscal stability. Meanwhile, some states are coupling these deep tax cuts with voting restrictions to take electoral power away from low-income communities and communities of color, further limiting their avenues to address fiscal inequities and influence policy decisions.

Costly and regressive state tax cuts typically provide scant benefit to individuals with low and moderate incomes or to people and places that have been historically excluded, such as rural counties and communities of color. They often end up harming these communities instead. One reason is that lost tax revenue leads to decreased state spending for public services.

Another reason is that sharply reducing income tax rates — or eliminating the tax altogether — typically funnels the lion’s share of tax benefits to people with more wealth and higher incomes, worsening already high levels of inequality. Most state and local tax systems are already asking for more from those with lower incomes, and plans to slash income taxes can actually increase taxes for non-wealthy taxpayers — for example, if the state replaces the lost revenue by hiking sales taxes and fees, or replaces a graduated state tax system with a flat income tax rate that raises rates for those with the lowest incomes. 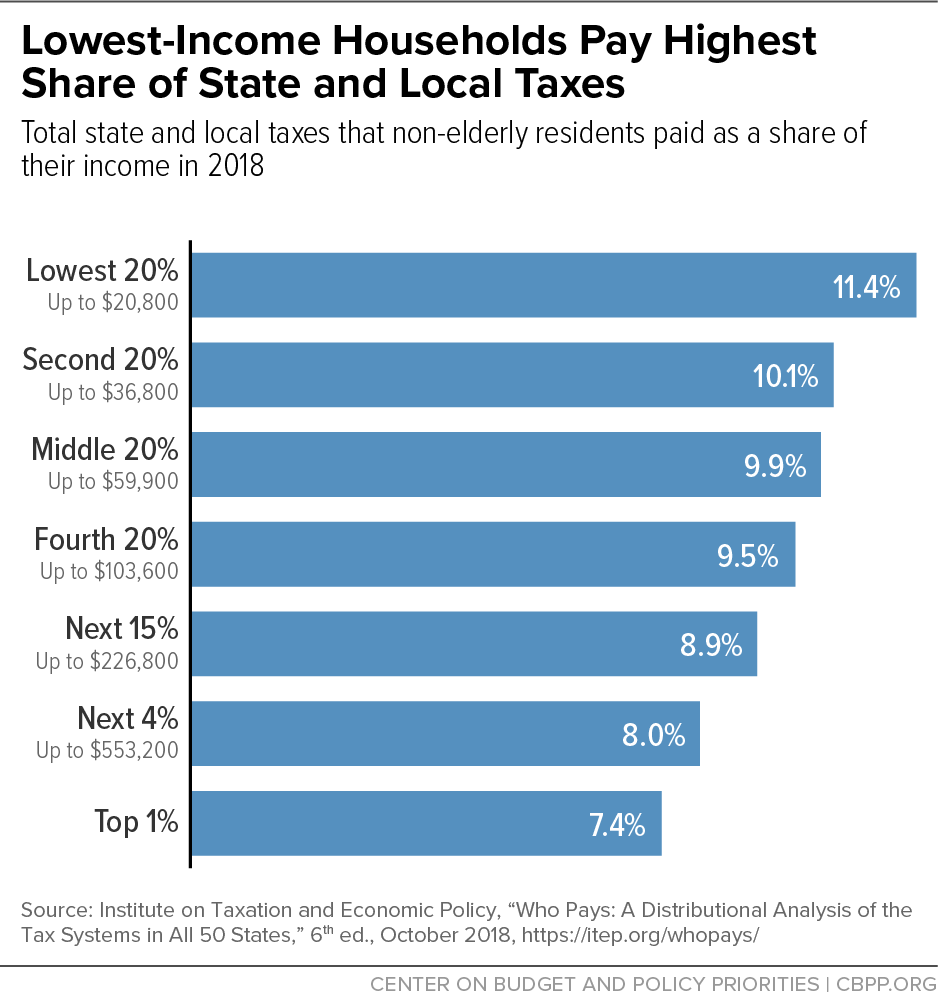 Instead, states should consider leveraging temporary surpluses and historic federal aid toward equity-enhancing investments that support an economic recovery extending to all people and help confront the nation’s legacy of racism. Black and brown people continue to face structural barriers, inadequate access to health care, and racial discrimination in the labor market, creating large disparities in wealth and income.

States can also reduce racial and class inequities by strengthening their taxes on wealth and higher incomes or closing loopholes. For example, they could raise income taxes on especially high incomes, boost taxes on capital gains (or at least require that capital gains be taxed at the same rate as wages), increase taxes on the sale or purchase of expensive homes, and reinstate taxes on estates or inheritances.

States (and localities) should adopt new fiscal policies to advance the common good, especially by investing in low-income people and communities of color. For example, as some states have already done, they could shift away from criminal justice fees and fines for court operations, police departments, and other public services, which are rooted in a racist history, are costly to administer, and fall heavily on people with the lowest incomes and disproportionately on Black, Indigenous, and Latinx people.

States can also promote economic opportunity and racial justice by raising sufficient revenues and targeting proactive investments and other policies toward the public good. For example, state earned income tax credits (EITCs) ease the impact of state and local taxes on people paid low wages. They also help families afford basic needs, reduce poverty, and help with long-term child and maternal health, student learning, and more. EITCs provide a sensible alternative for policymakers looking to provide well-targeted tax benefits to families with low wages. And refundability (making the full credit available to families no matter how much they owe at tax time) and extending eligibility, such as to filers with Individual Taxpayer Identification Numbers, help more people facing high needs keep more of what they earn.

April 29, 2021
PreviousUncompensated Care Costs Fell in States That Recently Expanded Medicaid
NextThis Tax Day, Many Are Eligible for Larger Refunds Due to Credit Expansions
Stay up to date
Receive the latest news and reports from the Center