| By Ife Floyd and Liz Schott

Cash assistance benefits for the nation's poorest families with children fell again in purchasing power in 2011 and are now at least 20 percent below their 1996 levels in 34 states, after adjusting for inflation.  While most states froze benefit levels in 2011, six states and the District of Columbia cut them, reducing assistance for more than 700,000 low-income families that represent over one-third of all low-income families receiving such assistance nationwide.[1]

The benefits are provided through the Temporary Assistance for Needy Families (TANF) program which was established by the 1996 welfare law.  The data cited here are for state fiscal year 2011 (July 2010 to June 2011 in most states).  In all but two states, benefit levels are now below 1996 levels, after adjusting for inflation, and these declines came on top of even larger declines over the previous quarter century; between 1970 and 1996, cash assistance benefit levels for poor families with children fell by more than 40 percent in real terms in two-thirds of the states.

A key goal of the 1996 welfare reform law that replaced the old Aid to Families with Dependent Children program (AFDC) with TANF was to place greater emphasis on work while continuing to provide a safety net to families with children that are unable to work because jobs are not available or they are addressing a personal or family crisis.  The program's effectiveness as a safety net depends on the extent to which very poor families are actually enrolled in it and on the level of benefits and the quality of employment and other services that they receive.  TANF has been performing inadequately on both of these dimensions for some time, but the situation has worsened during the recent economic downturn because of the combination of increased need and large state budget shortfalls.

Between December 2007 and December 2009, state TANF caseloads increased by just 13 percent nationally, lagging far behind the increases in SNAP (food stamp) caseloads, the number of unemployed, and the number of people in families with children that live below the poverty line. [2]  Large numbers of families that qualify for TANF benefits to meet basic needs are not receiving them.  In 1996, for every 100 poor families with children, 68 received cash assistance through the AFDC program.  In 2009, for every 100 such families in poverty, only 27 received any cash assistance through TANF.  And for the shrunken group that does receive assistance, benefits — which already were low when TANF was established and left families far below the poverty line — are now considerably lower in real terms in most states and are continuing to decline in value year by year (see Appendices 1a and 3).

The first purpose of TANF is to provide assistance to needy families so that children may be cared for in their homes or those of relatives, but the cash assistance benefits do not provide sufficient income to fulfill this goal.  There is not a single state in the nation in which the TANF benefit level for a family of three with no other income is at least equal to the Fair Market Rent for a two-bedroom apartment.  The Fair Market Rent is HUD's estimate of the amount needed to cover the rent and utility costs of a modest housing unit in a given local area. In fact, in a majority of states, TANF benefits amount to less than half of the Fair Market Rent.

This was the largest number of states to reduce TANF benefit levels in nominal terms since TANF's creation in 1996.  The cuts arose from the intersection of multiple factors:

With no additional TANF funds available from the federal government to help states respond to the large increase in the number of impoverished families as a result of the economic downturn, and with tight state budgets, state cuts in TANF cash assistance accelerated in 2011.

Six states and the District of Columbia have cut benefit levels since July 2010:

Three states — Oregon, Texas and Wyoming — have increased their benefit levels since July 2010.[5]  In Oregon and Texas, however, benefits remain well below their 1996 levels in purchasing power.

TANF benefit levels are so low that they are not sufficient in any state to raise a family's income above 50 percent of the poverty line. [6]  (See Figure 2 and Appendix 2.)  In 14 states, monthly benefit levels are less than $300 for a family of three (less than $3,600, or 20 percent of the poverty line, on an annual basis).[7]

Because TANF benefits have declined substantially, they do much less to help families escape deep poverty than they did in 1996.  A majority of states — 29 of them — have benefit levels below 30 percent of the poverty line; back in 1996, only 16 states did.  In all but two states, a poor family relying solely on TANF to provide the basics for its children (such as during a period of joblessness, illness, or disability) is further below the poverty line today than in 1996. (See Appendix 2.)

Some families can combine TANF with earned income to help meet basic needs.  Nearly all states have adopted "make work pay" policies under which TANF benefits phase out gradually as family earnings increase.  Even so, families become ineligible for TANF cash assistance at very low income levels in nearly all states.  Moreover, not all TANF families are able to supplement benefits with earnings; many families include parents with significant disabilities or other barriers to work. 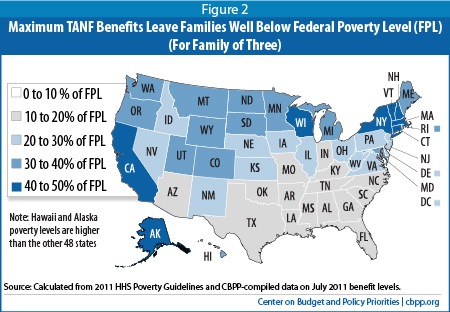 Benefits Have Failed to Keep Pace with Inflation

When inflation is taken into account, the value of TANF benefits is lower now than in 1996 in the District of Columbia and every state except Maryland and Wyoming.  (See Figure 3 and Appendix 3.)  More specifically:

Benefits Are Not Sufficient to Cover Housing Costs

TANF benefits cover only a fraction of the estimated costs of housing for a family, and housing is only one of the basic needs that a family must meet.  In 2011, the monthly TANF benefit level for a family of three is less than the estimated cost of a modest two-bedroom apartment (based on HUD Fair Market Rents or FMRs) in all states, and less than half of the FMR in 26 states.  (See Figure 4.)  Some TANF families receive housing subsidies, but most do not.  Only one in four eligible low-income households receives any federal housing assistance because of program funding limitations.[9]

Between 2000 and 2011, the median Fair Market Rent of all 50 states and the District of Columbia increased  from $580 to $773, while the median TANF benefit increased from $379 to just $428.  (These figures are in nominal dollars — i.e., they are not adjusted for inflation.)  As TANF benefits decline in real dollars in most states, they cover a smaller and smaller share of housing costs over time, as Figure 5 shows.

The share of the Fair Market Rent that TANF benefit levels cover has decreased quite sharply in some states. Vermont's TANF benefit level, for example, equaled the FMR for a two-bedroom apartment in 2000 but covered only two-thirds of the FMR by 2011.  (See Appendix 4.)

Unlike TANF, the Supplemental Nutrition Assistance Program (SNAP, formerly known as food stamps) has provided a strong safety net for many unemployed families and individuals during the recession.  In most states, combined TANF and SNAP benefits do a better job of pulling families out of deep poverty than TANF alone. About 80 percent of TANF cases receive SNAP benefits consistently.[10] In 2010, the average monthly SNAP benefit for households with TANF income was $428 a month.[11]  Still, SNAP and TANF benefits combined are below the poverty line in all states and below 75 percent of the poverty line in 45 states. (See Figure 5.)  In nearly all states, the gap between combined TANF and SNAP benefits and the poverty line is substantial.

More TANF Cuts May Be Coming

A stagnant economy and significant state budget shortfalls have caused states to make deep cuts in their TANF programs in recent years.  Unfortunately, the fiscal outlook for states' TANF programs in 2012 is as bad as 2011 — in some cases, worse.  Some 42 states had to close budget shortfalls for FY 2012 and a number of states will face gaps in coming months.[13]  For example, Washington State, which made deep TANF cuts last year including a 15 percent reduction of benefit levels, is facing a new $2 billion shortfall for the remainder of FY 2012 and the Governor has convened a special legislative session in November to consider additional cuts; further TANF cuts are under consideration.  Washington's situation is not unique. States are coming out of a very deep fiscal hole, and have a long way to go before they fully recover. [14]

So far, Congress has extended TANF only for the first quarter of federal fiscal year 2012.  The extension included $612 million for the TANF Contingency Fund but no funding for the TANF Supplemental Grants, so the 17 Supplemental Grant states will receive less TANF funding, even in nominal dollars, than in any year since TANF's creation.

State legislatures and TANF agencies will once again be working under tight fiscal conditions when they develop their budgets for 2013.  TANF's block grant structure, with broad state flexibility, makes it an attractive revenue source for filling funding gaps for a broad range of state programs that do not have a dedicated funding source — and it offers no protection for state cash assistance programs.  Therefore, the cuts that six states made to benefit levels in 2011 may be followed by larger, more damaging changes in 2012.

[1] Three states increased benefits in 2011, but, in two of these states, benefit levels have still not kept up with inflation over the past 15 years.

[4] The TANF Emergency Contingency Fund helped many states sustain — and, in a few cases, increase — their TANF benefit levels during 2009 and 2010.  However, this additional funding ended September 2010.

[12] For Figure 5, CBPP calculated typical SNAP benefits assuming that a family's shelter costs are the same as the median shelter costs for families with incomes at or below 80 percent of the poverty line.  A family's SNAP benefit amount is calculated based on its income and deductions, with the capped deduction for high shelter costs playing a significant role.  For over half of the states, the estimated SNAP benefit used in Figure 5 is the maximum monthly benefit for a family of three ($526).  The SNAP benefit that an individual TANF family actually qualifies for, based on its particular circumstances often is lower, however, than the estimate used here, because many TANF households do not incur shelter expenses high enough to qualify them for the maximum SNAP benefit. 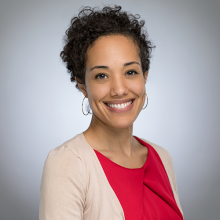