| By Elizabeth McNichol
The encouraging 8.4 percent growth in state revenues in the 12-month period ending in June 2011 offers a glimmer of hope that states are beginning to climb out of the fiscal hole caused by the recession.  Unfortunately, that hole was so deep that even if revenues continue to grow at last year’s rate — which is highly unlikely, as explained below — it would take seven years to get them back on a normal track. In other words, revenues probably won’t come close to what states need to restore the programs that they cut during the recession unless states raise taxes, at least temporarily, while the economy slowly recovers. The graph shows how much states would be collecting if revenues had not dropped sharply due to the recession but instead had continued to grow at their historical rate of 5 percent.  (The 5 percent rate is based on actual collections between 1980 and 2008, with adjustments for projected inflation and GDP growth.)  It also shows that, at the 2011 rate of 8.4 percent, revenues wouldn’t get back on a normal track until 2019.
Image 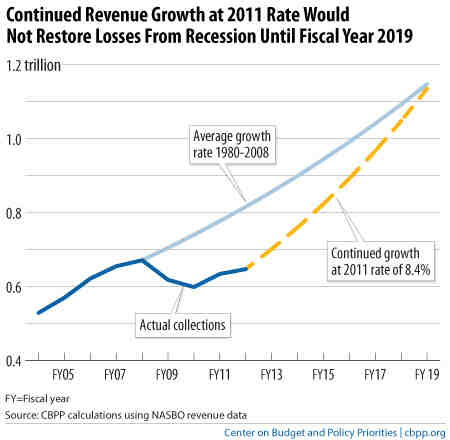 State tax collections typically grow faster than normal after a recession as they recover from a reduced base.  But we haven’t seen sustained growth at an 8.4 percent level since the 1960s. If the economic recovery falters and state tax collections only grow at about 5 percent per year, revenues will remain more than 20 percent below where they would have been with normal growth. Recent data suggest that revenue growth may have started to slow.  Preliminary data from the Rockefeller Institute and a recent Goldman Sachs report show revenue growth of about 7 percent for the beginning of fiscal year 2012; Goldman Sachs notes that this is the smallest increase in over a year.  Many state forecasters expect this slowdown to continue: in their adopted budgets for this fiscal year, states projected growth of only 2.6 percent. The bottom line is that states will face significant shortfalls for a number of years in funding for education, health care, and other services unless they raise taxes.

Share
Facebook Twitter Print Email
PreviousFor the Supercommittee, No Deal Is Better Than a Bad Deal
NextIn Case You Missed It...
Stay up to date
Receive the latest news and reports from the Center