The Joint Committee on Taxation (JCT) estimates that Senate Finance Committee Chairman Orrin Hatch’s revised tax bill would lose $1.4 trillion between 2018 and 2027, but begin to raise revenue starting in 2027.  To limit the bill’s cost in this way, Chairman Hatch proposed to repeal the Affordable Care Act’s individual mandate, sunset the bill’s individual tax provisions after 2025 (with an important exception explained below), and include other provisions, such as tax increases that take effect starting in 2026.  If, however, policymakers in the future extend those tax cuts and stop those tax hikes, the picture changes dramatically: under that scenario, we estimate that the bill would cost roughly $1.9 trillion over the decade and lose more than $200 billion in 2027.

Chairman Hatch revised his tax bill to comply with Senate rules for “reconciliation,” a special budget process that protects a bill from a filibuster and allows it to pass with only a simple majority in the Senate.  The Chairman’s original bill would have violated the part of the “Byrd rule,” named after former Senator Robert Byrd, that prohibits a reconciliation bill from increasing the deficit in any year after the period that the reconciliation instruction covers (in this case, 2018-2027).  With Chairman Hatch’s revisions to his bill, its cost would diminish rapidly in 2026 and it would begin to raise revenue in 2027.

Our estimates assume that, unlike what the bill proposes: 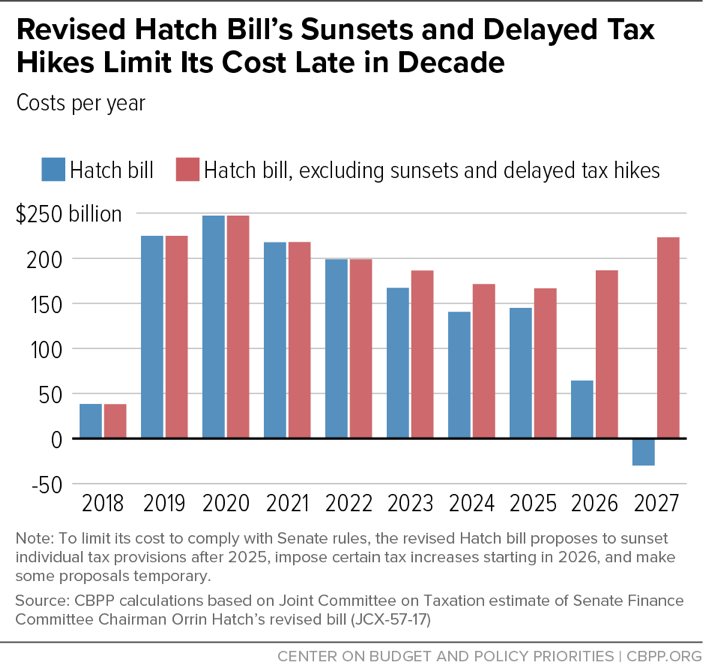 As we acknowledged earlier today, we don’t know what the President and Congress would do in the coming years if they faced the prospect that tax cuts were due to expire; concerns over budget deficits or political gridlock could prevent them from taking action.

But the fate of the 2001 Bush tax cuts — the last time that a Republican majority enacted a costly tax cut after sidestepping the Byrd rule — is instructive.  Like the Senate bill, the original Bush tax cuts would have increased deficits beyond the first decade.  Policymakers addressed that problem by sunsetting all of the tax cuts before the end of the tenth year.  In the end, however, policymakers voted to make the vast majority (82 percent) of the tax cuts permanent.

Further, the Bush sunsets simply turned off the tax cuts, reverting to prior law.  But if, under the revised Hatch bill, the individual tax provisions expire as scheduled, millions of taxpayers would face higher individual taxes than under prior law.  That’s because the Senate bill sunsets all of the individual tax provisions except the proposal to use the “chained CPI” (Consumer Price Index) for adjusting those parts of the tax code that are indexed for inflation, like the standard deduction and the income thresholds for different tax brackets.  The chained CPI rises more slowly than the current inflation measure, so it would cause people to face higher taxes than under prior law — no doubt further raising the pressure on policymakers not to let the sunsets take effect.

Also, today’s budget outlook is vastly different than that of 2001.  In 2001, the federal government was running a budget surplus, the debt was shrinking, and large surpluses were forecast.  Today, deficits are growing and the debt is projected to rise as a percent of the economy.  As a result, policymakers should be serious about reining in the bill’s long-term costs, rather than proposing solutions simply to navigate Senate rules.

PreviousYes, the Massive Coverage Losses From Repealing the Individual Mandate Would Be Harmful
NextRoundup: CBPP’s Analyses of the Senate Tax Plan
Stay up to date
Receive the latest news and reports from the Center