The Earned Income Tax Credit (EITC) is a federal tax credit for low- and moderate-income working people. It encourages and rewards work as well as offsets federal payroll and income taxes. Twenty-nine states, plus the District of Columbia, have established their own EITCs to supplement the federal credit.

Who Is Eligible, and for How Much?

When filing taxes for 2019 (due in April 2020), working families with children that have annual incomes below about $41,100 to $56,000 (depending on marital status and the number of dependent children) may be eligible for the federal EITC. Also, working-poor people who have no children and have incomes below $15,570 ($21,370 for a married couple) can receive a very small EITC. In the 2018 tax year, over 22 million working families and individuals in every state received the EITC.

The amount of EITC depends on a recipient’s income, marital status, and number of children. As the figure shows, workers receive the credit beginning with their first dollar of earned income; the amount of the credit rises with earned income until it reaches a maximum level and then begins to phase out at higher income levels (see the table at the end of this piece for how the EITC is calculated). The EITC is “refundable,” which means that if it exceeds a low-wage worker’s income tax liability, the IRS will refund the balance.

Research indicates that families mostly use the EITC to pay for necessities, repair homes, maintain vehicles that are needed to commute to work, and in some cases, obtain additional education or training to boost their employability and earning power.

The EITC is designed to reward work. As noted, a worker’s EITC grows with each additional dollar of earnings until reaching the maximum value. This creates an incentive for people to join the labor force and for low-wage workers to increase their work hours.

This incentive feature has made the EITC highly successful. Studies show that the EITC encourages large numbers of single parents to join the labor force, especially when the labor market is strong.

Specifically, a highly regarded study found that EITC expansions are the most important reason why employment rose among single mothers with children during the 1990s — the EITC was more effective in encouraging work than either the strong economy or the 1996 law that weakened core basic needs programs. 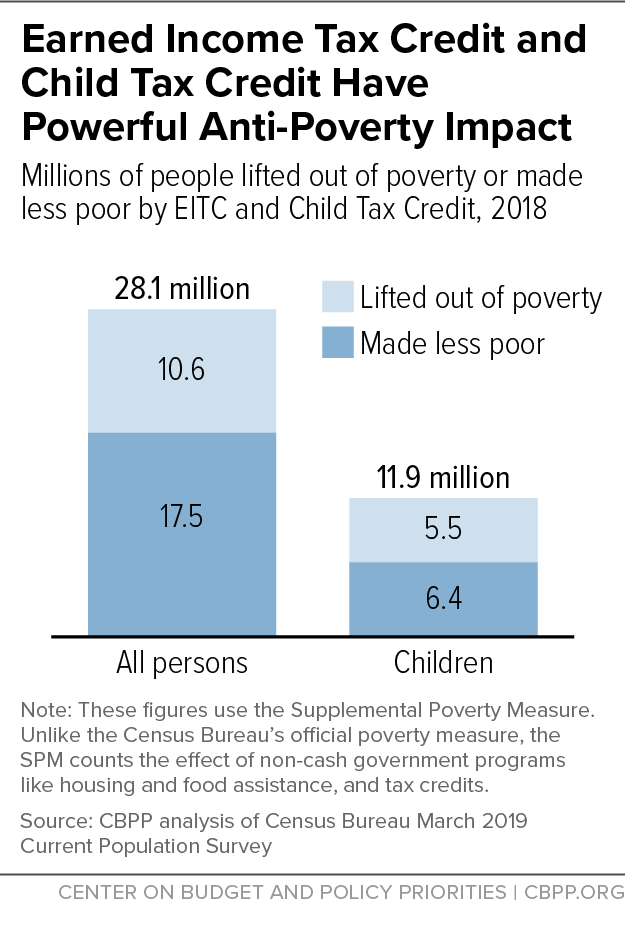 The EITC reduces poverty by supplementing the earnings of low-wage workers and by rewarding work. There has been broad bipartisan agreement that a two-parent family with two children with a full-time, minimum-wage worker should not have to raise its children in poverty. At the federal minimum wage’s current level, such a family can move above the poverty line only if it receives the EITC as well as SNAP (food stamp) benefits.

Moving out of poverty is particularly important for young children. Research has found that lifting low-income families’ income when a child is young not only tends to improve a child’s immediate well-being, but is associated with better health, more schooling, more hours worked, and higher earnings in adulthood. A burgeoning literature links EITC receipt to improved school performance and higher college attendance rates.

A Hole in the EITC

In contrast to the EITC for families with children, the EITC for workers not raising children in the home remains extremely small — too small even to fully offset federal taxes for workers at the poverty line. Under current law, a childless adult or noncustodial parent working full-time, year-round at the federal minimum wage is ineligible for the EITC. (Such an individual would receive the maximum EITC if he or she had children.) As a result, low-wage workers not raising children are the sole group that the federal tax system taxes into or deeper into poverty.

Working households qualify for an EITC based on earnings. Beginning with the first dollar of earnings, as a low-income household earns more, its EITC increases (“phases in”). As the EITC phases in, it is calculated at a set percentage of earnings called the “phase-in rate,” which depends on marital status and number of children. For example, a married couple with two children has an EITC phase-in rate of 40 percent, so for each dollar this family earns up to a certain level, its EITC increases by 40 cents. The phase-in ends when the EITC reaches its maximum amount. For households whose income falls between the point where the phase-in ends and a second, higher threshold, the EITC stays constant at the maximum amount. For households whose income is above the second threshold, the point where the EITC phase-out begins, a household’s EITC amount decreases by a set percentage of income (the “phase-out rate”) until the EITC is reduced to zero, where the phase-out ends.

aNote: Unmarried filers who claim children for the purposes of the EITC usually file as heads of household; the parameters for each family size are the same as for single filers.