The federal estate tax is a tax on very large inheritances received by a small group of wealthy heirs. Because it only affects the heirs of the wealthiest Americans — fewer than 1 in 1,000 estates — the estate tax is the most progressive part of the tax code.

A long-standing part of the tax system, the estate tax is a tax on property (cash, real estate, stock, or other assets) transferred from deceased persons to their heirs. Taxes on inherited wealth are also a traditional and common revenue source for states.

The federal estate tax is levied only on the portion of an estate’s value that exceeds the exemption level, minus deductions, such as for charitable giving. Largely because of the generous exemption level, fewer than 0.1 percent of estates pay any estate tax, and typically at fairly moderate rates.

The estate tax also serves as a backstop to the capital gains tax: without it, the increase in the value of unsold assets that had appreciated over time would never be subject to taxation.

Estate Tax Has Weakened Considerably Since 2001

Legislation enacted in 2001 gradually phased out the estate tax by raising the exemption level and reducing the rate, leading to the tax’s temporary repeal in 2010. The tax was scheduled to return in 2011 under pre-2001 rules (an individual exemption of $1 million and a top rate of 55 percent), but policymakers instead permanently extended it in much weaker form.

Taxable estates will owe 16.5 percent of their value in tax in 2018, on average (see chart). This “effective rate” is much less than the top marginal rate of 40 percent for three reasons:

Some supporters of the 2017 tax law argued that its doubling of the estate tax exemption was necessary to keep large numbers of family-owned small farms and businesses from having to pay estate tax. However, in 2017, only about 20 small farm and business estates nationwide owed any estate tax, Tax Policy Center (TPC) analysis finds (see chart). TPC also estimates that those few estates owed about 9 percent of their value in tax, on average. In addition, special estate tax provisions allow the few taxable estates that may have any difficulty paying the tax immediately to spread payments over 15 years, at low interest rates. 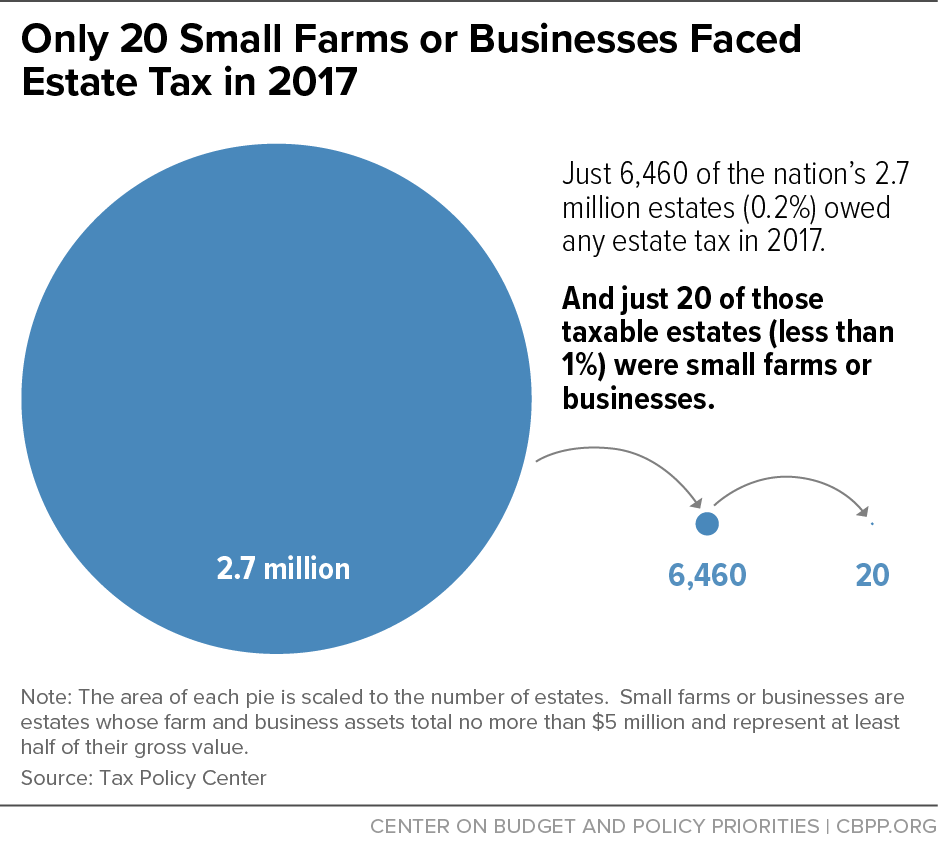 Estate Tax Serves as a Backstop to Capital Gains Tax

Usually, capital gains are taxed when the asset is sold or disposed of and the gain is “realized.” But if a person holds an asset that grows in value until his or her death, neither the heir of the estate nor the deceased person ever pays tax on that “unrealized” gain. Unrealized capital gains account for a significant proportion of the assets held by large estates — ranging from 32 percent for estates worth $5-10 million to as much as about 55 percent for estates worth more than $100 million (see chart). Thus, without the estate tax, a large portion of the largest estates would never be taxed.

Opponents of the estate tax argue that it hurts the economy. However, evidence shows the estate tax likely has little or no impact on overall private saving, and it has a positive impact on overall national (private plus public) saving because of the revenues it raises — the tax will generate about $250 billion over 2019-2028 under current law, according to the Congressional Budget Office. Research also finds that the estate tax encourages heirs to work.

In sum, the estate tax is an economically efficient way to raise revenue that supports public services and lowers deficits without imposing burdens on low- and moderate-income Americans. Its role in our revenue system is particularly important given our long-term budget challenges.

October 30, 2017
Stay up to date
Receive the latest news and reports from the Center