Update, April 5:  We’ve corrected a typo in the chart.

Ahead of tomorrow’s House Agriculture Committee hearing on tax reform, a group of agricultural trade associations have called for repealing the estate tax on inherited wealth, arguing that “all too often at the time of death, farming and ranching families are forced to sell off land, farm equipment, parts of the operation or take out loans” due to the tax.  Their arguments miss the mark.  Only 50 small farm and small business estates in the entire country will pay any estate tax in 2017 (see chart), and they’ll owe less than 6 percent of their value in tax, on average, the Tax Policy Center estimates. 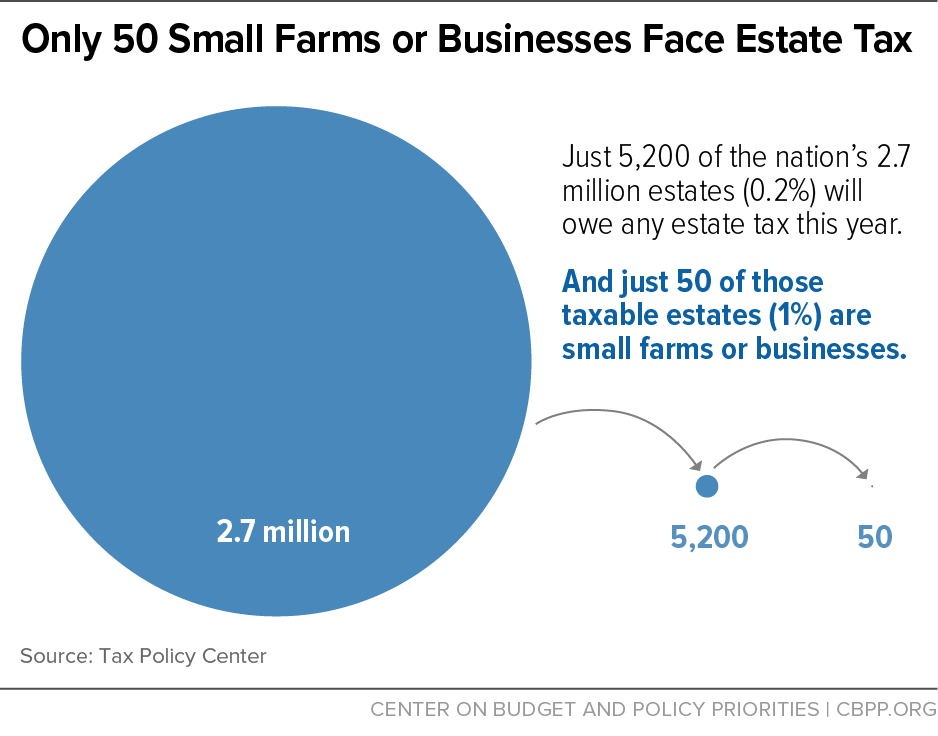 The estate tax affects so few small farms and businesses because the first $5.49 million of assets per person ($10.98 million per couple) are entirely exempt from it.  Moreover, most farmers and business owners with estates large enough to owe the tax have sufficient liquid assets (such as bank accounts, stocks, and bonds) to pay the tax without having to touch other assets or liquidate their farm and business, a 2005 Congressional Budget Office (CBO) study found. Today’s estate tax rules are even more generous than those CBO assumed in its analysis.  Special estate tax provisions also allow estate tax filers to spread their payments over a 15-year period at low interest rates.

While doing next to nothing for family farms, repeal would provide a windfall to the wealthiest 0.2 percent of estates — the only ones large enough to pay the tax.  A repeal proposal recently reintroduced in the Senate would provide the 0.2 percent of wealthiest estates with an average tax cut of more than $3 million in 2017.  Roughly 330 estates worth more than $50 million would get more than $20 million apiece in tax cuts, the Joint Committee on Taxation estimates.  The proposal would also cost $269 billion over the decade, expanding deficits and adding to pressure for cuts in federal programs.

No, the Estate Tax Isn’t a Heavy Burden on Small Businesses