The House GOP health plan would repeal, starting in 2018, two Medicare taxes in the Affordable Care Act (ACA) that fall only on high-income filers: the additional Hospital Insurance payroll tax on high earners and the Medicare tax on unearned income. These tax cuts together would cost $275 billion over ten years, according to the Joint Committee on Taxation, and they’re raising increased concerns even within Republican circles.

For example, California House Rep. Tom McClintock told MSNBC’s Chris Hayes last week, “I don’t think it’s defensible or sustainable for us to be giving massive tax cuts to investors while we have not assured that the tax system is supporting low-income families as they try to reach out for new health care insurance in the new market we are creating.”

Three resources help to explain how these tax cuts would harm health coverage and benefit high-income earners and corporations: 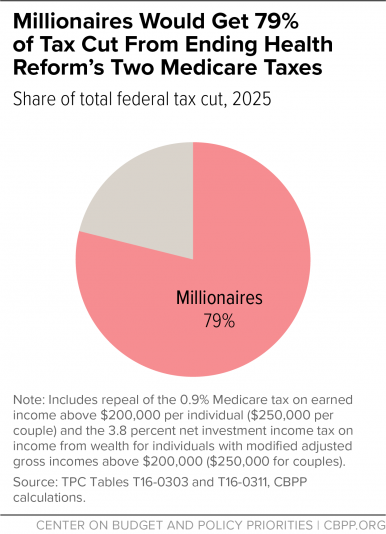 Commentary: Ryan Makes It Clear That Cutting Medicaid to Pay for the Health Bill’s Tax Cuts for the Wealthy Enables Deeper Corporate Tax Cuts in Tax Legislation to Follow