Created in 1965, Medicaid is a public insurance program that provides health coverage to low-income families and individuals, including children, parents, pregnant women, seniors, and people with disabilities; it is funded jointly by the federal government and the states.  Each state operates its own Medicaid program within federal guidelines. Because the federal guidelines are broad, states have a great deal of flexibility in designing and administering their programs. As a result, Medicaid eligibility and benefits can and often do vary widely from state to state.

In 2018, Medicaid provided health coverage for 97 million low-income Americans over the course of the year. In any given month, Medicaid served 32 million children, 28 million adults (mostly in low-income working families), 6 million seniors, and 9 million people with disabilities, according to Congressional Budget Office (CBO) estimates.

Medicaid is a counter-cyclical program: its enrollment expands to meet rising needs during an economic downturn, when people lose their jobs and job-based health coverage. During the Great Recession of 2007-09 and its aftermath, more than 10 million additional people — roughly half of them children — enrolled in Medicaid. Likewise, Medicaid enrollment will rise in coming months due to the COVID-19 public health and economic crises, preventing millions of people who lose jobs or income from becoming uninsured.

Who Is Eligible for Medicaid?

Medicaid is an “entitlement” program, which means that anyone who meets eligibility rules has a right to enroll in Medicaid coverage. It also means that states have guaranteed federal financial support for part of the cost of their Medicaid programs.

States may also receive federal Medicaid funds to cover “optional” populations. These include: people in the groups listed above whose income exceeds the limits for “mandatory” coverage; seniors and people with disabilities not receiving SSI and with income below the poverty line; “medically needy” people (those whose income exceeds the state’s regular Medicaid eligibility limit but who have high medical expenses, such as for nursing home care, that reduce their disposable income below the eligibility limit) and other people with higher income who need long-term services and supports; and — thanks to the Affordable Care Act (ACA) — non-disabled adults with income below 138 percent of the poverty line, including those without children. The ACA was intended to extend coverage to all such adults, but a 2012 Supreme Court decision gave states the choice of whether to expand their programs.

Not all people with low-incomes are eligible for Medicaid. In the 15 states that have not implemented the ACA Medicaid expansion (as of April 2020), adults over 21 are generally ineligible for Medicaid no matter how low their incomes are unless they are pregnant, caring for children, elderly, or have a disability. And, in the typical non-expansion state, even parents are ineligible if their income exceeds just 42 percent of the poverty line ($9,122 for a family of three).

In addition, many people who are not U.S. citizens are ineligible for Medicaid despite having a lawful immigration status. This group includes people with temporary protected status whom the federal government has allowed to live in the country for humanitarian reasons and people granted temporary permission to come to the United States for educational purposes, travel, or work in a variety of fields, among others. Also, lawful permanent residents (often referred to as green card holders) cannot enroll in Medicaid for the first five years, even if they meet all eligibility requirements. (States have the option to extend eligibility to all lawfully present children and pregnant women without a five-year wait.)

How Did the Affordable Care Act Change Medicaid?

The expansion is a very good financial deal for states. After picking up all expansion costs for the first three years, the federal government now pays 90 percent of expansion costs on a permanent basis. And by greatly reducing the number of uninsured, the expansion will save states and localities substantial sums on uncompensated care for the uninsured. Some expansion states have also experienced savings in mental health programs, criminal justice systems, and other budget areas.

What Services Does Medicaid Cover?

Medicaid covers more than 60 percent of all nursing home residents and roughly 50 percent of costs for long-term care services and supports.

States can — and all do — cover certain additional services as well. All states cover prescription drugs, and most cover other common optional benefits include dental care, vision services, hearing aids, and personal care services for frail seniors and people with disabilities. These services, though considered “optional” because states are not required to provide them, are critical to meeting the health needs of Medicaid beneficiaries.

Medicaid does not provide health care directly. The large majority of Medicaid beneficiaries are covered through private managed care plans. For others, state Medicaid programs pay hospitals, doctors, nursing homes, and other health care providers for covered services that they deliver to eligible patients. (Health care providers are not required to participate in Medicaid, and not all do.)

How Much Does Medicaid Cost? How Is It Financed?

Together, states and the federal government spent about $630 billion on Medicaid services in fiscal year 2018. State policies have a substantial impact on the amount the federal government spends on Medicaid, not only because states are guaranteed federal Medicaid matching funds for the costs of covered services furnished to eligible individuals, but also because states have broad discretion to determine who is eligible, what services they will cover, and what they will pay for covered services, as discussed above.

Medicaid is a lean program. It costs Medicaid substantially less than private insurance to cover people of similar health status. This is due primarily to Medicaid’s lower payment rates to providers and lower administrative costs. Over the past decade, costs per beneficiary grew more slowly for Medicaid than for employer-sponsored insurance. And through 2027, the Office of the Actuary at the Centers for Medicare & Medicaid Services projects, spending per beneficiary will grow no more rapidly in Medicaid than in private insurance.

How Effective Is Medicaid?

Medicaid is very effective in providing health insurance coverage to the most vulnerable. Since the ACA’s major coverage expansions took effect in 2014, Medicaid has helped to reduce the number of uninsured from 45 million to 29 million. If Medicaid did not exist, most of the tens of millions of Medicaid enrollees would be uninsured. This is because private health insurance is generally not an option for Medicaid beneficiaries: many low-income workers do not have access to coverage for themselves and their families through their jobs and cannot afford to purchase coverage in the individual market. The creation of Medicaid, subsequent expansions of Medicaid coverage to children and pregnant women in the 1980s and 1990s, and the most recent expansion of Medicaid coverage to low-income adults under the ACA all have led to significant drops in the share of Americans without health insurance coverage.

Medicaid is also effective in improving access to care, in supporting financial stability among low-income families, and in improving health outcomes. Some of the clearest evidence comes from the ACA expansion of Medicaid coverage to low-income adults, which provides a recent ”natural experiment,” letting researchers compare outcomes in states that did and did not adopt the expansion.

These studies find that after expansion took effect, the shares of low-income adults with a personal physician, getting check-ups and other preventive care, and getting regular care for chronic conditions rose in expansion states relative to non-expansion states. Medical debt fell by $1,140 among those gaining Medicaid coverage under the ACA expansion, another study finds, and low-income adults in expansion states gained better access to credit (including lower-interest mortgages and auto loans) and were less likely to be evicted from their homes. Meanwhile, a battery of studies collectively show that Medicaid coverage leads to improvements in overall self-reported health, reduces the share of low-income adults screening positive for depression, improves diabetes and hypertension control, and reduces one-year mortality among patients diagnosed with end-stage renal disease.

Perhaps most striking, several rigorous studies have found that Medicaid expansion saves lives. One study estimates that expansion has saved over 19,000 lives just among older adults, while state decisions not to expand cost more than 15,000 lives. 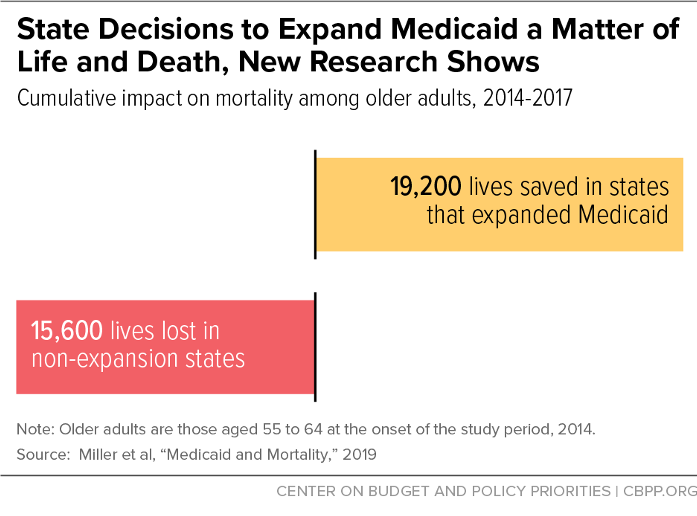 Other research also finds large benefits from Medicaid coverage. Notably, a landmark study of Oregon’s Medicaid program found that, compared to similar people without coverage, people with Medicaid were more likely to use preventive care, to have a regular office or clinic where they could receive primary care, and to receive diagnosis of and treatment for depression and diabetes.

Medicaid coverage also has long-term benefits for children. Children with Medicaid do better in school and miss fewer school days due to illness or injury, research shows. They are also more likely to finish high school, attend college, and graduate from college; they earn more as adults; and they experience fewer emergency room visits and hospitalizations.