Note: The COVID-19 recession and subsequent relief packages have dramatically changed spending and revenue levels for fiscal years 2020 and 2021. We use pre-pandemic figures below to illustrate the composition of the federal budget and taxes under more normal circumstances.

“Tax expenditures” are subsidies delivered through the tax code as deductions, exclusions, and other tax preferences. In fiscal year 2019, tax expenditures reduced federal income tax revenue by roughly $1.3 trillion, and they reduced payroll taxes and other revenues by an additional $140 billion.

Tax expenditures reduce the amount of tax that households or corporations owe. To benefit from a tax expenditure, a taxpayer must undertake certain actions or meet certain criteria. For example, some households that have a mortgage can reduce their taxes by claiming a tax deduction for their spending on mortgage interest, and corporations can receive a tax subsidy for investing in machinery.

Tax expenditures are costly. For comparison, the cost of all federal income tax expenditures was higher than Social Security, the combined cost of Medicare and Medicaid, or the cost of either defense or non-defense discretionary spending. (See first chart, below.)

The largest individual income tax expenditure in 2019 was the provision that allows households to exclude from taxable income the value of employer-provided health insurance. The next three largest were the lower rates at which capital gains are taxed relative to earned income, tax breaks on owner-occupied housing (such as the home mortgage interest deduction), and the exclusion for employer-based retirement plans. The largest corporate tax expenditures for 2018 included the 2017 tax law’s lower tax rates on much foreign income of U.S. multinational corporations (relative to the rates that U.S. corporations face on their domestic profits) and “accelerated depreciation,” effectively a tax subsidy for spending on machinery and equipment. 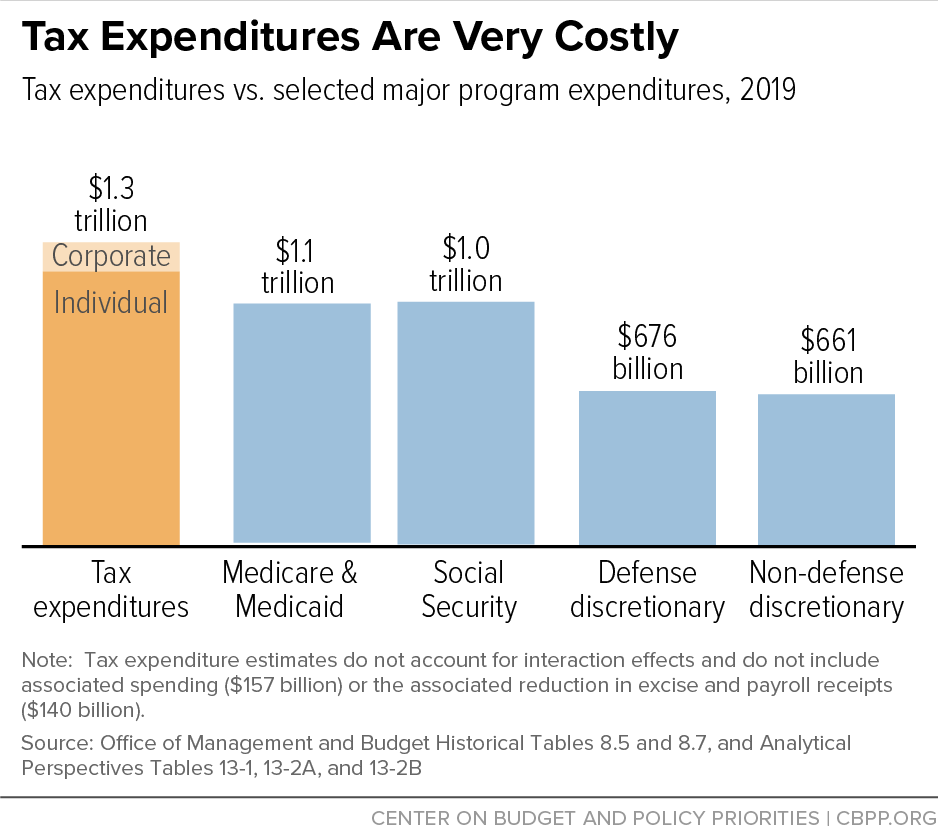 Spending Through the Tax Code

Tax expenditures are intended to promote policy goals. The distinction between these tax breaks and spending is often artificial and without economic basis.

Education is one example. On the spending side of the budget, the federal government provides Pell Grants to help low- and moderate-income students afford college. On the tax side of the budget, funds used to meet college expenses can grow tax free in special college savings accounts. Both of these policies are subsidies intended to promote higher education, and although the government categorizes them differently, they are both a type of government spending.

Similarly, business tax breaks targeted at specific industries, such as the tax breaks for oil and gas corporations, are the equivalent of subsidy programs for those industries.

Any tax filer — whether individual or corporate — that meets the requirements for a tax break can receive it. This feature makes tax expenditures similar to entitlement programs like Social Security or Medicare, where all people meeting eligibility criteria can receive benefits. The Joint Committee on Taxation, Congressional Budget Office, and Alan Greenspan, former Federal Reserve chairman, have all noted this similarity. For example, the child care tax credit is like an entitlement program, because all families eligible for the tax credit can receive it.

The bulk of each year’s spending on individual tax expenditures is delivered in the form of deductions, exemptions, or exclusions. The value of these tax breaks increases as household income rises — the higher one’s tax bracket, the greater the tax benefit for each dollar that is deducted, exempted, or excluded.

As a result, these tax expenditures are “upside-down,” providing their largest subsidies to high-income people even though these individuals are least likely to need financial incentives to engage in the activities that tax expenditures are generally designed to promote, such as buying a home, sending a child to college, or saving for retirement. Meanwhile, moderate- and low-income families receive considerably smaller tax expenditure benefits for engaging in these activities. (See second chart, below.)

This also means that these upside-down tax expenditures likely increase racial disparities in income and wealth. Racial barriers to economic opportunity erected by policy choices and private discrimination have resulted in households of color being disproportionately low or moderate income, so they receive much smaller benefits from many of these tax breaks, and in some cases are locked out of them altogether. The legacy of racial barriers and continuing discrimination (such as discrimination in housing and lending markets) also means that even among households with the same incomes, white households on average may be more likely to be able to claim these tax breaks and to secure a larger benefit from them than households of color.

Notable exceptions are tax credits, such as the Earned Income Tax Credit and the Child Tax Credit, that can be received in whole or in part as a tax refund by households whose incomes are too low to owe much federal income tax. These tax credits reduce poverty and raise the after-tax incomes of working families in low-paying jobs, and also help reduce racial and gender inequities.

Many policymakers have proposed cutting or overhauling tax expenditures to reduce the deficit, increase investments made on the spending side of the budget, reduce tax rates, better target the breaks towards households that need the most help to engage in whatever activity the breaks are intended to promote, or a combination of those aims. Tax expenditures lose revenue because they shrink the “tax base” — that is, they reduce the amount of income that is subject to tax. That means scaling back tax expenditures raises revenue by increasing the size of the tax base, so it is often called “base broadening.”

How the Federal Tax Code Can Better Advance Racial Equity