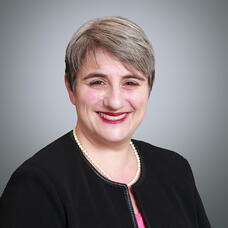 Sharon Parrott is President of the Center on Budget and Policy Priorities. Parrott has nearly three decades of experience at the Center and in government. Her expertise spans a broad range of issues, including policies to reduce poverty and expand opportunity, the intersection of the federal budget and low-income programs, and the use of data and analysis to inform policy debates.

Parrott rejoined the Center in 2017 after two years at the Office of Management and Budget (OMB) and served as the Center’s Senior Vice President for Federal Policy and Program Development before taking over as President in 2021. At OMB she served as Associate Director of the Education, Income Maintenance, and Labor Division, with budget and oversight responsibilities for the Departments of Labor and Education, the Social Security Administration, the human services programs at the Department of Health and Human Services (HHS), and the nutrition programs at the Department of Agriculture. As Associate Director, Parrott helped design budget and policy proposals, craft regulations, implement programs, and address management and budget challenges in these agencies.

Parrott previously worked at Center from 2012 to 2014 as Vice President for Budget Policy and Economic Opportunity, focusing on the impact of budget and tax policy on the nation’s efforts to reduce poverty and hardship and promote economic opportunity.

Before then, she served as Secretary Sebelius’ Counselor for Human Services Policy at HHS from August 2009 until November 2012. At HHS, Parrott was a lead advisor on human services issues, including programs for low-income families and children, children who have been maltreated or are at risk of abuse, seniors and people with disabilities. Her work included a broad range of efforts, including early education, Temporary Assistance for Needy Families (TANF), child support enforcement, child welfare, teen pregnancy prevention, community supports for seniors and people with disabilities, and the intersection of health reform and human services issues.

Parrott previously worked at the Center from 1993 through August 2009. Parrott was the Director of the Welfare Reform and Income Support Division and routinely provided technical assistance to federal policymakers, state agency officials, and state-level policy organizations on a range of issues related to income assistance programs and the interaction and integration of benefit program rules in Medicaid, SNAP, TANF, child care, and the Children’s Health Insurance Program.

Parrott also played a key role in the Center’s work on the federal budget, the impact of federal budget decisions on low-income populations, low-income tax policy, and policies that ensure that solutions to climate change do not adversely impact the economic well-being of low-income households.

In 1999 and 2000, Parrott was detailed to the District of Columbia's Department of Human Services, where she served as a Senior Policy Advisor on TANF, food stamps, and Medicaid issues.

She received a B.A. in economics and a master’s degree in social work from the University of Michigan.