Puerto Rico on Verge of Implementing an EITC

With Puerto Rico’s governor signing a major tax package into law today, the Commonwealth is slated to implement a local Earned Income Tax Credit (EITC) in 2019. The EITC is a proven and much-needed tool that should help the Commonwealth combat high levels of poverty (especially child poverty), unemployment, and chronically low labor-force participation — the share of the population that’s working or looking for work.

Puerto Rico faces massive economic challenges that include over a decade of economic decline, an unsustainable debt burden, and the devastating effects of Hurricanes María and Irma. The EITC enjoys broad bipartisan support, as an integral part of Puerto Rico’s recovery and rebuilding, from not only the governor and legislature but also the federal Financial Oversight and Management Board, which has overseen Puerto Rico’s fiscal and bankruptcy matters since 2016 and must approve the tax package.

If, as expected, the board certifies that the tax package is consistent with the Commonwealth’s approved fiscal plan, the EITC will take effect in January 2019. (The board has concerns about the tax package that do not relate to the EITC.) Once the EITC is in place, Puerto Rico will join the District of Columbia and 29 states that have successfully implemented their own EITCs.

Puerto Rico estimates that its EITC will cost $204 million a year and provide a maximum credit of between $300 and $2,000, depending on family size and configuration. Similar to the federal EITC, the size of the credit will depend on a filer’s marital status and number of dependent children (see table and chart below). For instance, a single mother with two children can receive a credit equal to 10 percent of her earnings up to $15,000, for a maximum credit of $1,500. Once her earnings exceed $16,000, the amount of the credit begins to shrink, ultimately phasing out when her earnings reach $28,500, as the table and chart below show. Any Puerto Rico resident can calculate his or her potential EITC benefits with this Puerto Rico EITC calculator. 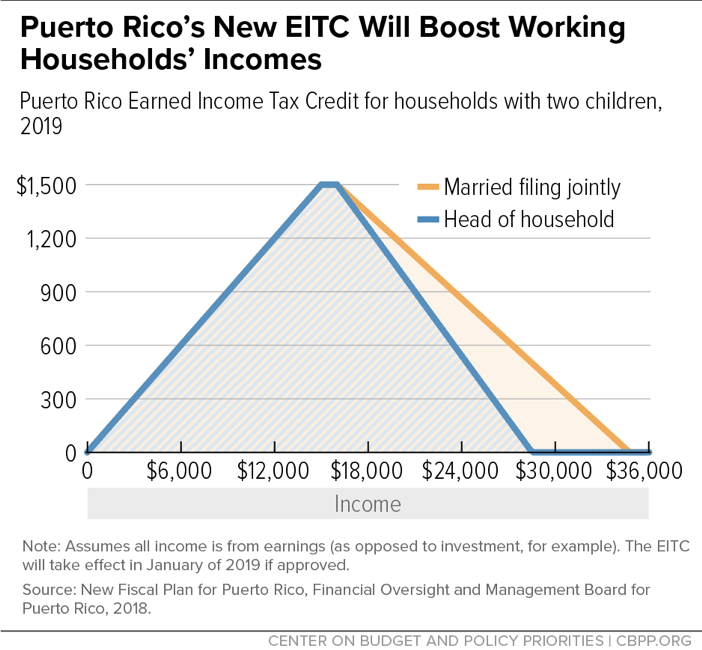 Puerto Rico had an EITC from 2007 to 2013, but policymakers ended it in 2014 amidst the government’s deepening fiscal crisis. Its new EITC, however, is substantially better designed than the old one, the benefits of which were not adjusted by marital status or the number of dependent children. The new one will help the government better target resources to boost incentives for labor-force participation, reduce child poverty, and provide needed support to working families, according to a study by Espacios Abiertos, a policy research organization in Puerto Rico.

Despite offering larger benefits than the previous one, Puerto Rico’s new EITC remains quite modest, given the Commonwealth’s serious challenges — which include a labor-force participation rate of 40 percent and a child poverty rate of 56 percent (versus mainland U.S. averages of 63 percent and 21 percent, respectively).

States have piggybacked on the federal EITC by creating their own state EITCs to the benefit of millions of low- or modest-wage families. Puerto Rico deserves credit for pursuing its own EITC, which will help the Commonwealth tackle high poverty and low labor-force participation. While its upcoming EITC is a step in the right direction, federal policymakers should consider bolstering funding for it to magnify its positive effects on the island, its economy, and its hard-pressed residents.

State EITC Expansions Will Help Millions of Workers and Their Families

July 27, 2018
PreviousBy December 15: Shop for Coverage, Update Your Information on HealthCare.gov
NextMontana Program Supports Work Without Causing Harm
Stay up to date
Receive the latest news and reports from the Center