April 15 marks the deadline for families and businesses to file their federal income taxes, which support an array of crucial services all over America. But state taxes play an equally crucial role in families’ and communities’ well-being. Different approaches to raising state tax revenue can lessen, or worsen, economic inequality and racial injustice. Likewise, choices around spending those dollars on schools, health care, child care, and other services can help, or hurt, efforts to expand prosperity and build healthier communities.

This Tax Day, we’re highlighting six charts detailing the importance of state and local taxes and noting some practical ways for states to pursue a better path in how they raise and spend revenue.

First, more than half of state tax dollars support education (K-12 and beyond) and health care, as the chart shows. Targeted education investments are a proven way to help young people and the economy reach their full potential, and they’re especially crucial for states to consider after a decade of deep and harmful cuts to both K-12 schools and colleges and universities. State tax dollars also fund critical services such as public assistance, corrections, care for residents with disabilities, police, state parks, and a range of infrastructure including roads, public buildings, and water quality systems.

States looking to raise revenues should consider enacting a “millionaires’ tax,” as some states have done. Targeted income tax increases at the top, as our recent report explains, can generate significant revenues for pro-growth investments like education and infrastructure without harming states’ ability to grow their economies and create jobs. Of the eight states (including the District of Columbia) that have enacted lasting millionaires’ taxes since 2000, six enjoyed growth in private-sector gross domestic product about as good as or better than their neighbors’. 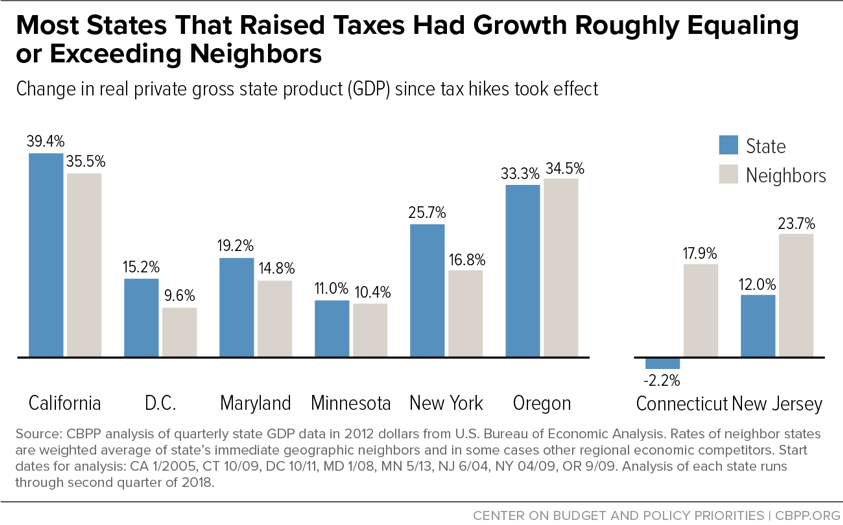 States looking to improve their tax systems also could tax the assets of the very wealthy, including stocks and bonds, real estate, and personal possessions like boats, jewelry, cars, and artwork. The nation’s wealth is concentrated in the hands of a few, and state tax systems have contributed to that concentration as wealthy individuals and corporations used their power to shape state tax policies to benefit themselves, for example, by persuading state and federal lawmakers to drastically scale back the estate tax. States can help fight economic inequality and tap a potentially large source of new revenue by exploring tactics like stronger taxes on inherited wealth, very expensive homes, and capital gains from investment income.

The policy options discussed above can help correct state and local tax systems which, overall, are typically regressive. Forty-five states tax low-income families more heavily as a share of their income than the wealthy, reinforcing or worsening economic inequality. As the chart below shows, the bottom fifth of U.S. taxpayers pay 11.4 percent of their yearly income in state and local taxes, versus only 7.4 percent for the richest 1 percent. That’s due in large part to state and local governments’ overreliance on sales and excise taxes, which fall more sharply on poor and middle-income families, in contrast to personal income taxes, which are based on ability to pay.

In response, many states are making their tax systems fairer by enacting (or expanding) a state Earned Income Tax Credit (EITC). State EITCs are a proven way to ease the impact of state and local taxes on low-income working families, letting them keep more of what they earn to make ends meet. Twenty-nine states, Washington, D.C., and Puerto Rico have their own EITCs. These credits build on the federal EITC’s effectiveness in keeping families working, reducing hardship, and putting children on a better path in life. The dollars from state EITCs can provide an economic boost to local communities, and research also consistently links EITCs to better health outcomes, such as reductions in low birthweight and infant mortality rates and improved maternal health. 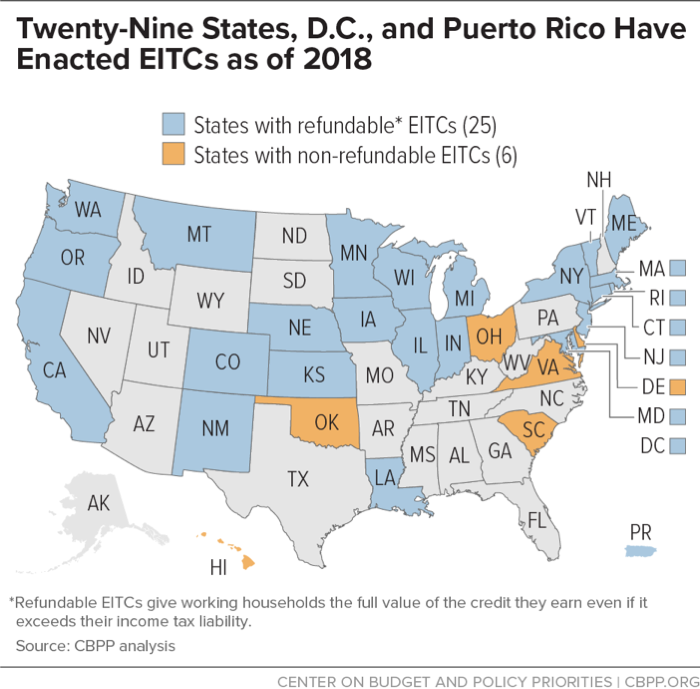 Lastly, researchers and policymakers nationwide are looking more closely at the link between state and local tax policy and racial inequity. Policies such as property tax limits and legislative supermajority vote requirements to raise revenues — which date back over a century and are still used widely — shifted the cost of government from wealthier white landowners to people of color, while constraining the pool of funds for investment in non-white communities. Even tax policies that appear race-neutral, such as changes to personal income or sales tax rates, often exacerbate racial disparities. For instance, when North Carolina slashed personal income taxes in 2013, black residents received only 10 percent of the total benefit, though they comprise 22 percent of the state’s population.