States Should Tax Wealth to Respond to COVID-19

Families’ access to wealth has largely determined how they’re affected by COVID-19, with wealthier and higher-paid families mostly avoiding the worst health and economic effects. This divergence reflects both racial and class inequities. As states face sizeable budget shortfalls due to the pandemic, they should raise taxes on wealthy people to preserve funding for crucial priorities such as education, to fund increased health spending to contain the pandemic, and to boost cash and other assistance to help struggling families make ends meet during the crisis.

High earners have been much less likely to lose jobs than other workers due to COVID-19. Employment rates have dropped by only about 1.6 percent since January for people earning over $60,000, while they’ve fallen more than 16 percent for workers earning less than $27,000, according to Opportunity Insights (see chart). 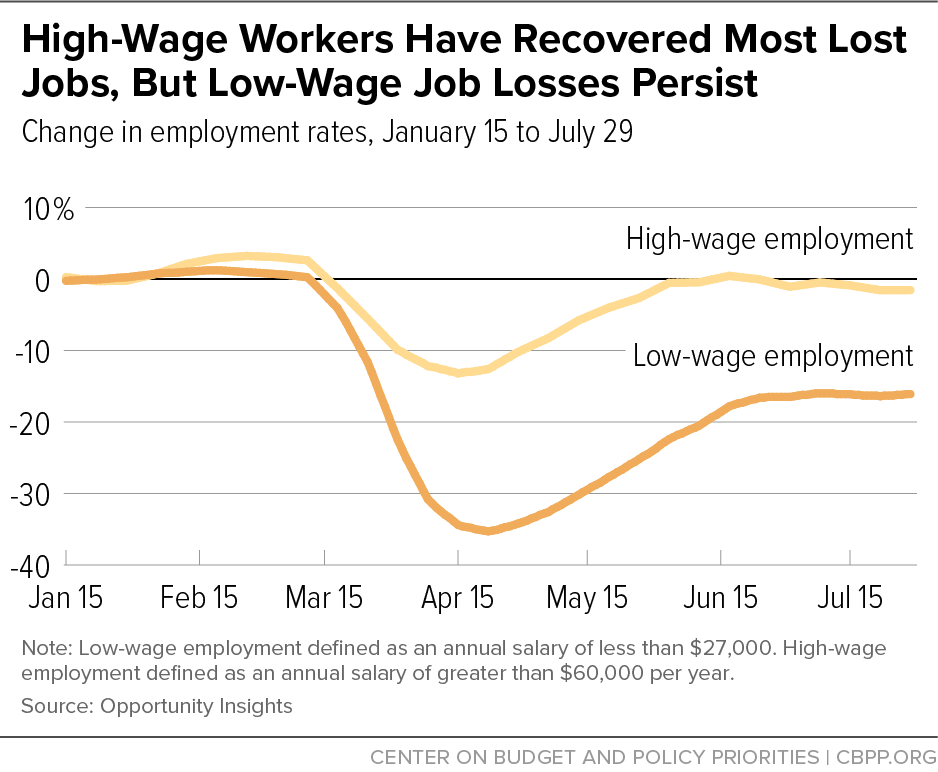 Wealth inequality is already high and, much like high-wage jobs, several sources of wealth have been spared the worst of the pandemic’s economic damage. The stock market is near its pre-pandemic peak, which mainly helps wealthy families, as over 90 percent of capital gains go to families earning over $163,000, and stock market investment rises steeply with income. Home values in many areas across the country also rose between March and June, including luxury home values. That means that the net housing wealth of many homeowners, who tend to be both wealthier than the overall population and disproportionately white, has risen despite the downturn.

Because 87 percent of wealth is already held by white households, these trends have disproportionately benefitted white families, while many families of color have encountered further economic barriers during the crisis.

The economic fallout has hit Black, Latino, Indigenous, and many immigrant people particularly hard. These disproportionate impacts reflect harsh, longstanding inequities — often stemming from structural racism — in education, employment, housing, and health care that the current crisis is exacerbating. Because people of color, particularly women of color, are overrepresented in low-wage jobs, they are likelier either to have lost jobs and income due to the pandemic, or to work in a front-line, essential occupation and risk exposure to COVID-19 and its potentially devastating health consequences. Furthermore, 1 in 5 renters is now behind on rent, with Black and Latino renters facing the highest rates of such hardship.

The recession caused by COVID-19 has slashed states’ revenues. The resulting budget shortfalls are large, affect nearly every state, and are already driving deep, painful cuts to education among other services as well as huge layoffs and furloughs of state and local workers. That means fewer teachers in classrooms and, in the middle of a pandemic, cuts to health care.

States should raise much-needed revenues by taxing wealth. Given the rising stock market, increasing home values, and high wage-earners’ relative ability to keep their jobs through the pandemic, this approach makes the most sense and is most equitable. States can choose from several options to tax wealth, including:

In the aftermath of the Great Recession, states facing budget shortfalls relied heavily on laying off workers, which unnecessarily prolonged the recession, and cut funding for schools, colleges, and other services. Some states also slashed income taxes and shifted to rely more heavily on sales taxes, and most increased fees and fines — approaches that worsened racial and class inequities and increased hardship for many struggling families, especially in communities of color. States must do better this time.

Taxing wealth would help states maintain crucial services like education and respond to the COVID-19 health crisis without further worsening economic and racial inequality. Wealthy families and profitable corporations can afford it, and states can’t afford not to.

April 29, 2021
PreviousIn Case You Missed It...
NextWithout More Action, Policymakers Will Let Food Hardship Continue
Stay up to date
Receive the latest news and reports from the Center