| By Elizabeth McNichol and Samantha Waxman

A historically large share of the nation’s wealth is concentrated in the hands of a few. As a result, millions of American families have less wealth, and therefore fewer opportunities, than they otherwise would. Further, since wealthy people are overwhelmingly white, this extreme wealth concentration reinforces barriers that make it harder for people of color to make gains. State taxes on inherited wealth — estate and inheritance taxes — can be a powerful tool for building a more broadly shared prosperity.

Most state and local tax systems are upside down: the wealthy pay a smaller share of their income in these taxes than low- and middle-income people do, even though they are best able to afford it. State taxes on inherited wealth are an exception, since they apply only to the wealthiest individuals and are the primary state tax on wealth. But these taxes have gradually eroded even as wealth and income have become more concentrated. States with these taxes should maintain them, and states without them should consider enacting them — or consider taxing inheritances as income. State taxes on inherited wealth do not depend on the existence of the federal estate tax.

What Is an Estate or Inheritance Tax?

An estate tax is a tax on property (cash, real estate, stock, and other assets) transferred from deceased persons to their heirs. A state applies a tax rate to the value of an estate that exceeds a certain threshold; both the rate and the exemption threshold differ by state. A typical state with an estate tax exempts $2 to $5 million per estate and applies rates ranging from 1 percent to 16 percent to the value of property left to any heirs except a spouse. On average, fewer than 3 percent of estates — very large ones owned by the wealthiest individuals — owe state estate taxes.

Some states levy an inheritance tax rather than an estate tax. It is levied on the recipients of the estate (the heirs) instead of the deceased person’s estate.

For example, consider an unmarried woman who owns a house, stocks, cash, and other assets worth $30 million. She leaves those assets to her three children in equal shares upon her death. In a state with an estate tax, the tax is based on the value of the entire $30 million estate and is subtracted from the value of the estate before its distribution to the heirs. In a state with an inheritance tax, the children each receive their $10 million bequest and then owe inheritance tax on that bequest.

How Many States Tax Inherited Wealth? 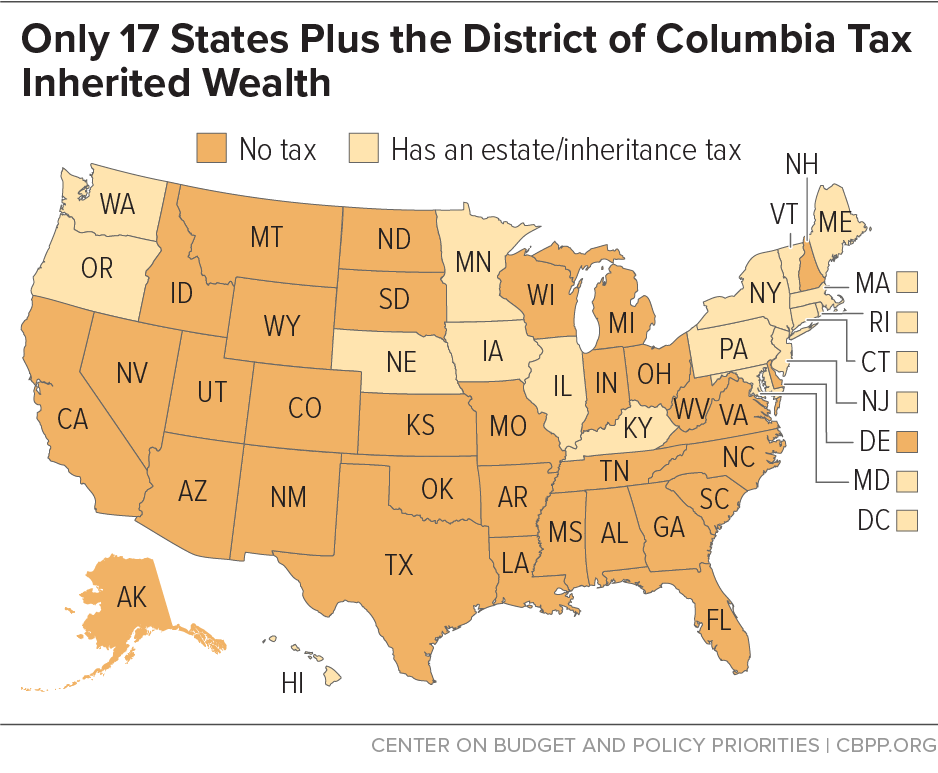 How Does an Estate or Inheritance Tax Affect State Economies?

States spend most of their tax revenues on three major building blocks of thriving communities: K-12 and higher education, health care, and public safety. State estate and inheritance taxes, by increasing the share of state revenues paid by the wealthy, allow states to keep taxes lower on people with moderate incomes, enabling them to spend more of their incomes to boost local economies.

Little credible evidence supports the claim that an estate or inheritance tax harms a state’s economy by causing large numbers of elderly people to leave the state or by discouraging them from moving there. At most, academic studies find that these taxes have a small effect on the residence decisions of a few, very wealthy elderly people.[1] The revenue loss from reducing or eliminating the estate tax, in contrast, reduces a state’s ability to make public investments that undergird economic growth and help produce an economy that works for everyone. Cuts in state services resulting from eliminating the tax can discourage businesses and individuals — both retirees and others — from remaining in or relocating to a state, likely doing more harm to the state’s economic growth than any small potential benefit from having no estate or inheritance tax.

States With an Estate or Inheritance Tax Should Maintain It

States with an estate or inheritance tax[2] should resist efforts to eliminate or significantly weaken it. As noted, claims that these taxes harm a state’s economy lack foundation.

States with an estate tax should consider lowering their exemptions to increase the amount of revenue the tax generates. For example, the District of Columbia lowered its estate tax exemption from $5.67 million to $4 million starting in 2021. The revenue boosts could be significant, especially in states that now exempt all but the very largest estates.

States Without an Estate or Inheritance Tax Should Consider Adopting One

States that no longer levy an estate or inheritance tax should consider restoring them. One option would be for states to set their estate tax at the same level as the federal credit before the 2001 federal tax law eliminated it. This has the advantage of statutory simplicity but reduces state flexibility.

States may instead prefer to enact estate taxes that are similar in structure to the pick-up tax but are not linked to the federal estate tax rules — as Connecticut, Hawai’i, Maine, Oregon, Vermont, and Washington have done. States that adopt such a stand-alone tax can customize the tax to fit their state’s circumstances. They can choose exemption levels and tax rates and can exempt certain assets such as farms if they desire.

In a few states, however, there are additional barriers to reinstating an estate tax. For example, in California, restoring the estate tax would require a vote of the people; in Alabama, Florida, and Nevada, constitutional provisions restricting the amount of estate tax levied would need to be altered.[4] In addition, some states require a supermajority vote to raise taxes.

Another way to preserve and expand state taxes on inherited wealth is to shift from an estate tax (a tax on the value of an estate) to a tax on the heirs to the estate that varies based on their incomes — essentially a form of inheritance tax. (A handful of states currently levy inheritance taxes, but these are generally small and are not tied to income.)

States would tax an heir’s inheritance by treating some or all of it as income subject to the income tax. In a state with a progressive income tax, a wealthier heir would pay a higher tax rate on the inheritance than an heir of lesser means.

Economist Lily Batchelder, formerly deputy director of the National Economic Council (and current nominee for Treasury Assistant Secretary for Tax Policy), proposed a federal inheritance tax along these lines in 2007.[5] It would tax an heir’s cumulative lifetime inheritances in excess of $2.3 million at the heir’s federal income tax rate plus 15 percentage points and exempt up to $5,000 in gifts and $25,000 in bequests annually. It was designed to raise as much federal revenue each year as the federal estate tax under 2009 parameters.

A new approach to a state inheritance tax could be broadly similar to Batchelder’s federal proposal, but adapting it to states would require resolving a number of issues:

Another way to tax inherited wealth that could either complement an estate or inheritance tax or stand on its own would be to eliminate the “stepped-up basis” for taxing capital gains, which often shields a significant share of accrued gains on inherited assets (such as stocks, bonds, and real estate) from taxation. See CBPP’s issue brief on capital gains for details.[6]

* Figures for fiscal year 2020 are estimates

.** Maryland Estate/Inheritance split estimated for 2019, Minnesota estimated by CBPP based on partial-year collections

*State currently has an inheritance tax. See Methodology Note for further information on this table.

Table 2 shows, for states without a state estate tax, rough estimates of the potential revenue that such a tax would raise at different exemption levels, based on the rates and brackets used for the State Death Tax Credit in 2001 federal law. (These estimates are based on national data. Estimates prepared by individual state budget or legislative fiscal offices will be more precise.)

Before the federal credit was eliminated, most states levied an estate tax equal to that credit which was calculated using a graduated rate schedule, with rates ranging from 0 percent for the smallest taxable estates up to 16 percent for estates of $10 million or more. The estimates in Table 2 were calculated by applying the state’s historical share of federal estate tax collections to federal collections for deaths in 2021 at various exemption levels estimated by the Urban-Brookings Tax Policy Center.

Estimating the revenue that the 12 states plus D.C. that have retained estate taxes would generate at different exemption levels is beyond the scope of this report.

Seventeen states plus the District of Columbia collect a total of around $5 billion per year through estate or inheritance taxes. Of these:

* Maryland has both an estate tax and an inheritance tax.

*** Exemption is adjusted annually for inflation.

[3] These exemptions are adjusted annually for inflation.

[4] California repealed an earlier version of the estate tax through a ballot initiative that included a provision requiring voter approval to levy any state estate tax other than a “pick-up” tax. The constitutions of Alabama, Florida, and Nevada limit any estate tax to a pick-up tax. In these states, restoring the estate tax would require amending the constitution. The amendment process requires some combination of a popular vote (or votes) and legislative approval, depending on the state (or a constitutional convention).

How States Can Tax Wealth