The nation’s wealth is concentrated in the hands of a few (see graphic), and state tax systems have contributed to that concentration as wealthy individuals and corporations used their power to shape state tax policies to benefit themselves. But better state tax policies could help build a more broadly shared prosperity.

The top 1 percent of households own roughly 40 percent of the wealth, while the bottom 90 percent own just 21 percent. This top-heavy structure reduces opportunity for millions of families — particularly Blacks, Latinos, and other families of color, who face great barriers to building wealth due to the legacy of historical racism and the ongoing damage from racial bias and discrimination. 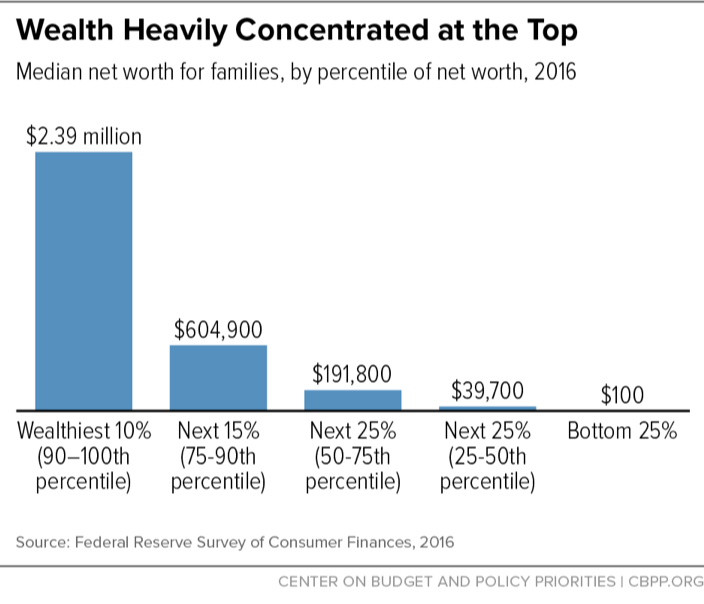 State and local governments depend mainly on income, sales, and property taxes. Low- and middle-income taxpayers pay a larger share of their income in sales and property taxes than wealthier taxpayers. The opposite is generally true for state income taxes, but state taxes in total are “upside-down” in the vast majority of states, meaning they ask the most of taxpayers who can least afford it.

As states seek to improve their tax systems, they should pay special attention to taxing the assets of the very wealthy — such as stocks and bonds, real estate, and personal possessions like boats, jewelry, cars, and artwork. Loopholes and special tax benefits shield many of these assets from federal, state, and local taxes. For example:

Eliminating these tax advantages would shift some of the responsibility for funding critical public services and investments like schools, roads, and health care from low- and moderate-income taxpayers to those best able to pay.

Reducing today’s extreme concentration of wealth is also critical to expanding equality of opportunity. Families with substantial savings and other wealth can give their children much better educational opportunities, a safety net to enable them to take risks on job opportunities that may not pay off, and loans to help them buy homes in better neighborhoods that will, in turn, give their children a head start.

Moreover, while fairness would dictate taxing income from inheritances at higher rates than income from work — since heirs don’t have to give up leisure time or work more to receive that income — inheritances are generally taxed at a much lower rate or not at all. One reason is the so-called “stepped-up basis” rule, under which people who inherit assets such as stocks, bonds, or real estate pay no taxes on any appreciation of their value that occurred before they inherited them.

Closing these holes in the tax system — such as by eliminating stepped-up basis, increasing property tax rates for high-end houses, or strengthening state estate taxes — would raise revenues for investments that help the state as a whole, such as education and health care. The added revenue could also support income supplements like state Earned Income Tax Credits to help families struggling to make ends meet as well as offset some of the concentration of wealth.