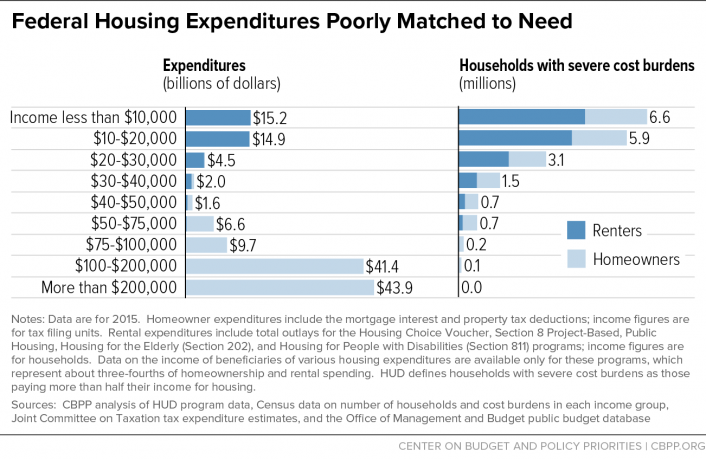 The proposed credit, which the Center designed, also would prove timely. Rising rents have made it harder for many families to afford housing, yet three out of four low-income renters eligible for housing assistance don’t get it due to funding limitations. In addition, more than 11 million renter households, most with incomes below the poverty line, pay over half of their income for housing. These families often must shift resources from basic needs like food or clothing to pay the rent, and they’re likelier than other families to face eviction and even homelessness — problems that can adversely affect children’s development and adults’ ability to find and keep a job.

A growing number of analysts have called for a new tax credit to help struggling renters afford housing. A project-based renters’ credit would enable states to allocate credits to owners of rental housing and developers to use in particular housing developments. Families living in renters’ credit units would pay no more than 30 percent of their income for rent and utilities; the owner would benefit from a federal tax credit in return for reducing the rent.

The new credit would complement the existing Low-Income Housing Tax Credit, which is an effective subsidy for building and rehabilitating affordable housing but which, by itself, rarely makes units affordable to poor families, since they generally can’t afford rents high enough to cover the ongoing cost of operating rental housing. It would help families who aren’t reached by rental assistance programs such as Housing Choice Vouchers, which are highly effective but help only a fraction of eligible families.

The credit could help a sizable number of families afford housing at a relatively modest overall cost. When fully phased in, for example, a credit with an annual cost of $6 billion could enable about 720,000 poor households to live in a stable home.

A $6 billion investment would amount to less than 5 percent of current federal homeownership tax expenditures and just 14 percent of the cost of the mortgage interest and property tax deductions now provided to taxpayers with incomes above $200,000. The credit would be scaled up gradually, so its cost (and the number of families assisted) would be much lower during its early years.

Interactive Graphic: Highlighting the 3 Out of 4 At-Risk Renters Who Don’t Get Rental Assistance

March 6, 2017
PreviousChairman Roberts Reiterates Opposition to SNAP Block Grant
NextCorrecting the History of Medicaid Per Capita Caps
Stay up to date
Receive the latest news and reports from the Center