Gap Between Rents and Renter Incomes Grew in 2015

Rents rose slightly more than the incomes of renter households in 2015, new Census data show, widening the already sizeable gap between incomes and rent and utility costs.  Growing housing costs make rental assistance — which reaches only one in four eligible families due to funding limits — critical to helping families keep a roof over their heads.

Renter incomes fell during the 2001 and 2007-2009 recessions and still haven’t fully recovered, despite a rise in median household income and decline in poverty in 2015.  The median renter household’s annual income grew by 2.7 percent or $900 in 2015, to $35,200, but remains 6 percent below the 2001 level adjusted for inflation.  (By itself, the 2015 increase doesn’t mean fewer households qualify for federal rental assistance, since eligibility varies by location and family size.)

Meanwhile, rents stagnated briefly during the last two recessions but are now growing much faster than overall inflation.  The median gross rent (rent plus utilities) rose by 2.9 percent or $27 in 2015 to $960 a month. That represents a nearly 9 percent increase in housing costs since 2001.

As a result, the gap between median rents (which have risen 8.6 percent since 2001) and renter incomes (which have fallen 6.2 percent) widened slightly in 2015 to almost 15 percentage points (see graph). 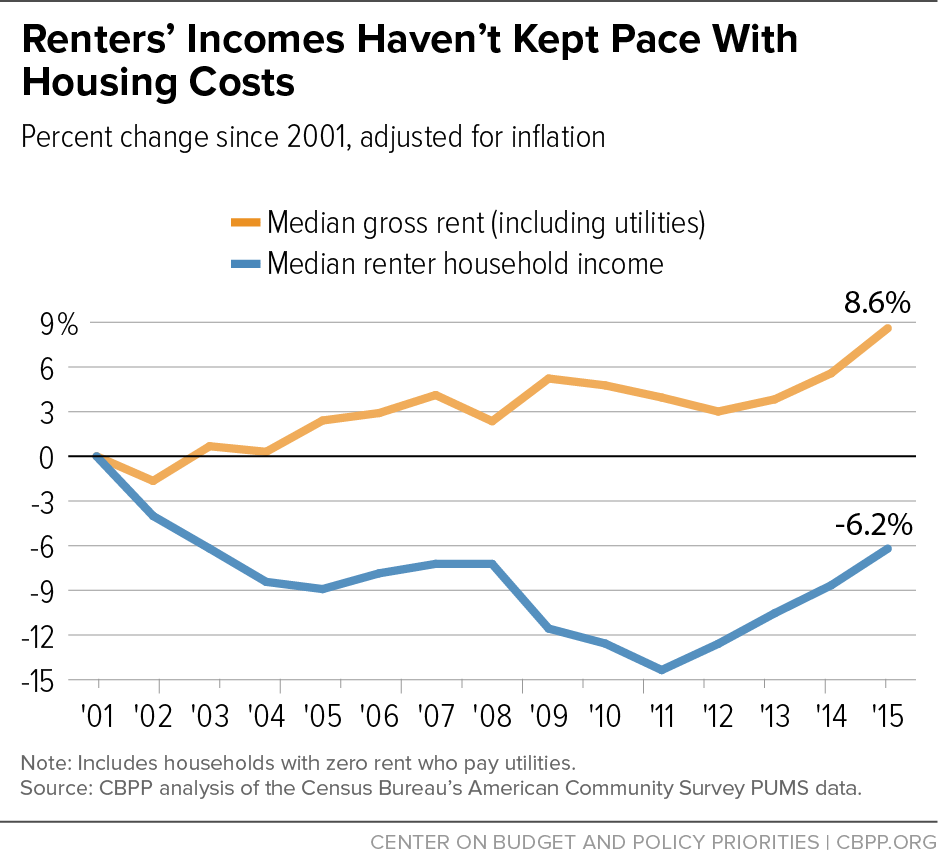 The large gap between household incomes and housing costs creates serious rental affordability problems for many families.  Three out of four low-income renters pay over 30 percent of their monthly income for rent — the federal standard of affordability — and don’t receive federal rental assistance.  (Low-income renters are those earning 80 percent or less of the local median income.) Families who pay too much for housing are at risk of overcrowding, housing instability, and homelessness.

Rental Assistance to Families with Children at Lowest Point in Decade