But even as rising numbers of low-income families struggle to pay rent and make ends meet, only one in four eligible households receives federal rental assistance due to funding limitations.  Helping many more low-income families to pay the rent should be a major goal of anti-poverty policy.

Section 1: Helping People Who Need It Most

Section 3: Providing a Platform for Improved Health and Well-Being

Section 1: Helping People Who Need It Most

Federal rules ensure that rental assistance goes to people who need it most, without discouraging work.  Assisted households’ incomes average about $13,500, and three-quarters have extremely low incomes (that is, below the poverty line or 30 percent of the area median, whichever is higher).  More than half of assisted households are elderly or people with disabilities; most of the rest are families with children.

Most assisted families that can work, do work.  Of the households that are neither elderly nor disabled, nearly three-fourths (73 percent) are working, recently worked, or are likely subject to work requirements under another program.  About half of the remaining households include young children or people with disabilities to care for. 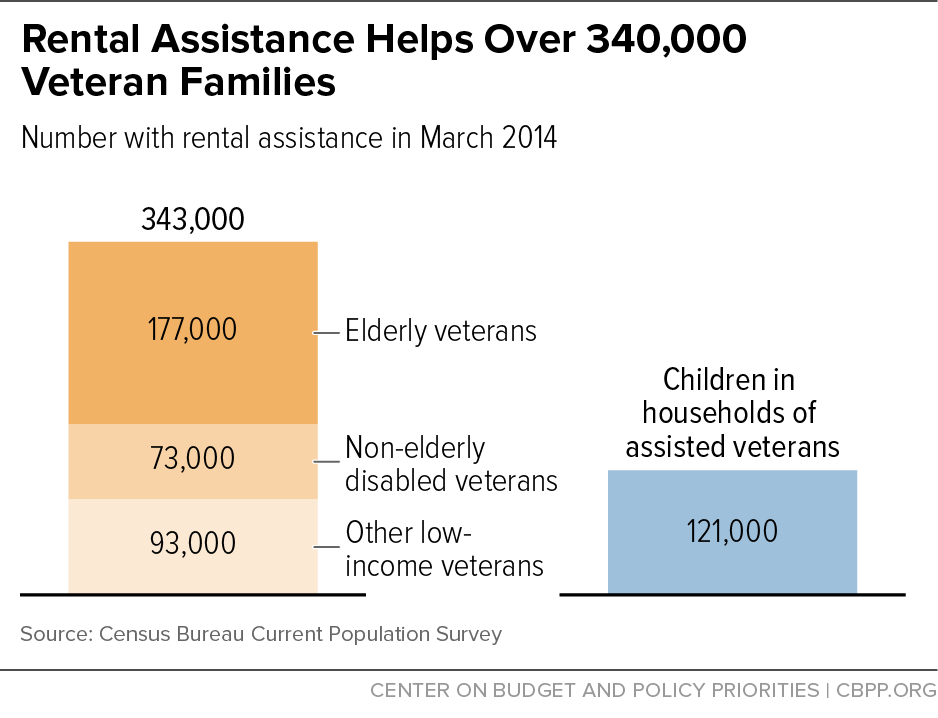 A large body of research finds that rental assistance sharply reduces homelessness, housing instability, and overcrowding.  For example, a rigorous study found that among families with children, vouchers reduced housing instability (living doubled up with family or friends or homeless) by four-fifths and reduced homelessness (living in a homeless shelter or on the street) by three-quarters.

Rental assistance helps homeless families in other ways, too.  Children in previously homeless families receiving vouchers change schools less frequently and are much less likely to be placed into foster care than other homeless families, one study found; their families also experience significantly less food insecurity and domestic violence. 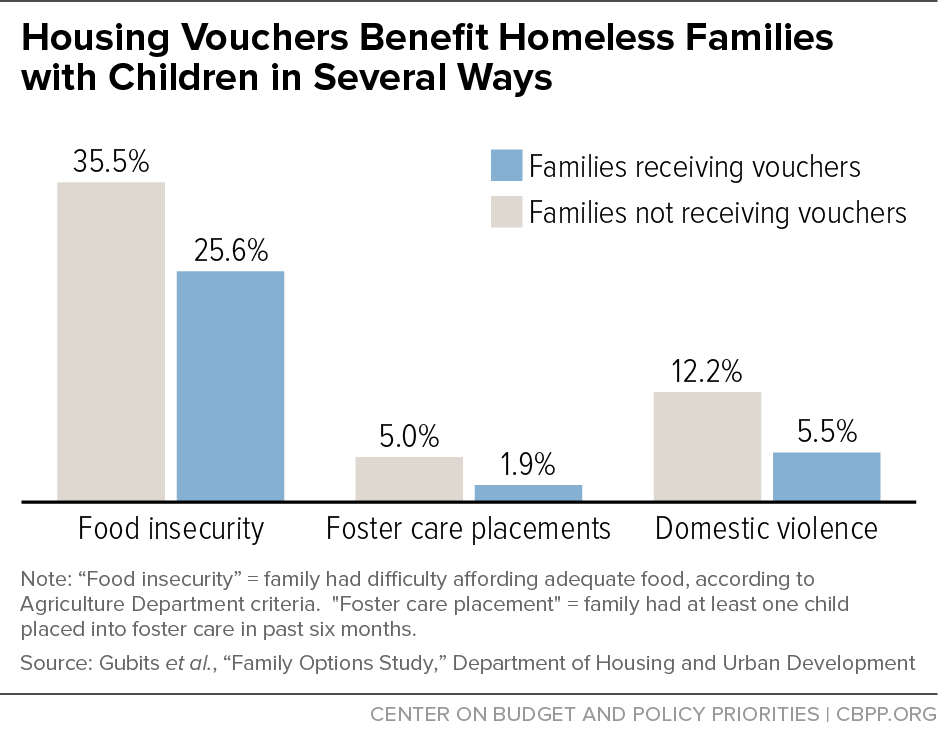 Vouchers have also proven effective in reducing homelessness among veterans.  From 2008 to 2016, policymakers funded more than 80,000 new HUD-Veterans Affairs Supportive Housing (VASH) vouchers for chronically homeless veterans with disabilities.  These vouchers, which are combined with case management and clinical services from VA medical centers, appear to have played a central role in the 35 percent reduction in veterans’ homelessness between 2010 and 2015. 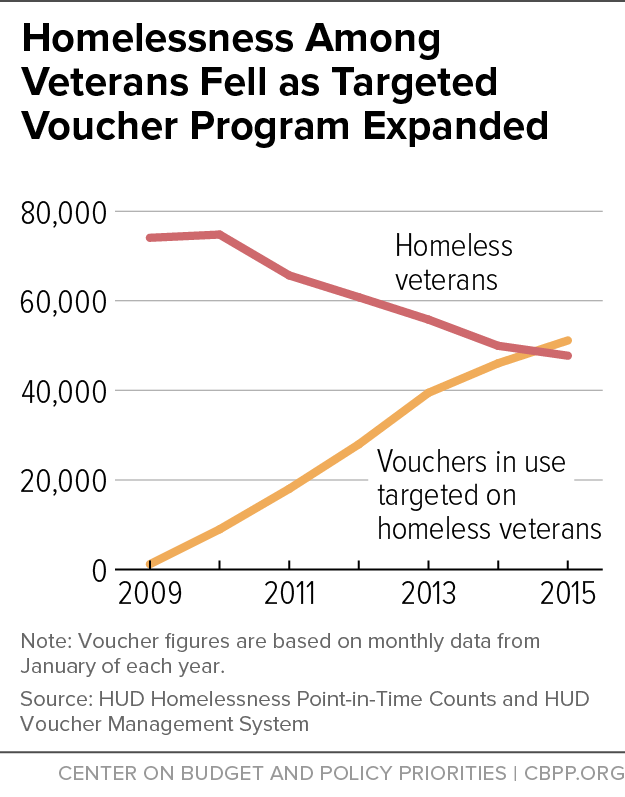 Federal rental assistance reduces poverty, lifting 4 million people (including 1.5 million children) out of poverty — more than one-third of the people in assisted households.  (These figures are based on the federal government’s Supplemental Poverty Measure, corrected for households’ underreporting of benefits.)  Rental assistance thus plays a critical role in the federal safety net, which reduces poverty by more than half overall.

Rental assistance also lifts 1.2 million people, including some 400,000 children, out of “deep poverty,” where household income is less than 50 percent of the poverty line.

Research consistently shows that poverty harms children, including by damaging brain development, and that children in poor families receiving income support (consisting of rental or other assistance) do better in school and earn more as adults.

By reducing families’ rental costs, rental assistance allows them to devote more of their limited resources to other basic needs.  Families paying large shares of their income for rent spend less on food, health care, and transportation than those with affordable rents.  There is also evidence that children in low-income households that live in affordable housing score better on cognitive development tests than those in households with unaffordable rents.  Researchers suggest that that is partly because parents with affordable housing can invest more in activities and materials that support their children’s development.

Section 3: Providing a Platform for Improved Health and Well-Being

Rental assistance — particularly vouchers, which enable families to rent a unit of their choice in the private market — can enable poor families to live in safer neighborhoods with less poverty and better schools.  A growing body of research finds that such neighborhoods can benefit low-income families in many ways.

Students living in public housing in low-poverty neighborhoods and attending low-poverty schools made large gains in reading and math scores compared with similar students attending moderate- to high-poverty schools, one study found.  After seven years, their test scores had risen by 8 percentage points in math and 4 percentage points in reading.  Those gains closed half of the achievement gap between those students and the district’s non-poor students in math and one-third of the gap in reading.

While vouchers only modestly improve access to low-poverty neighborhoods for households overall, they have substantial impacts among minority households with children.  Vouchers double poor African American children’s chances, and nearly double poor Hispanic children’s chances, of living in low-poverty neighborhoods, compared to similarly poor children whose families do not have vouchers.  Improved policies would enable more children in families using vouchers to grow up in better neighborhoods. 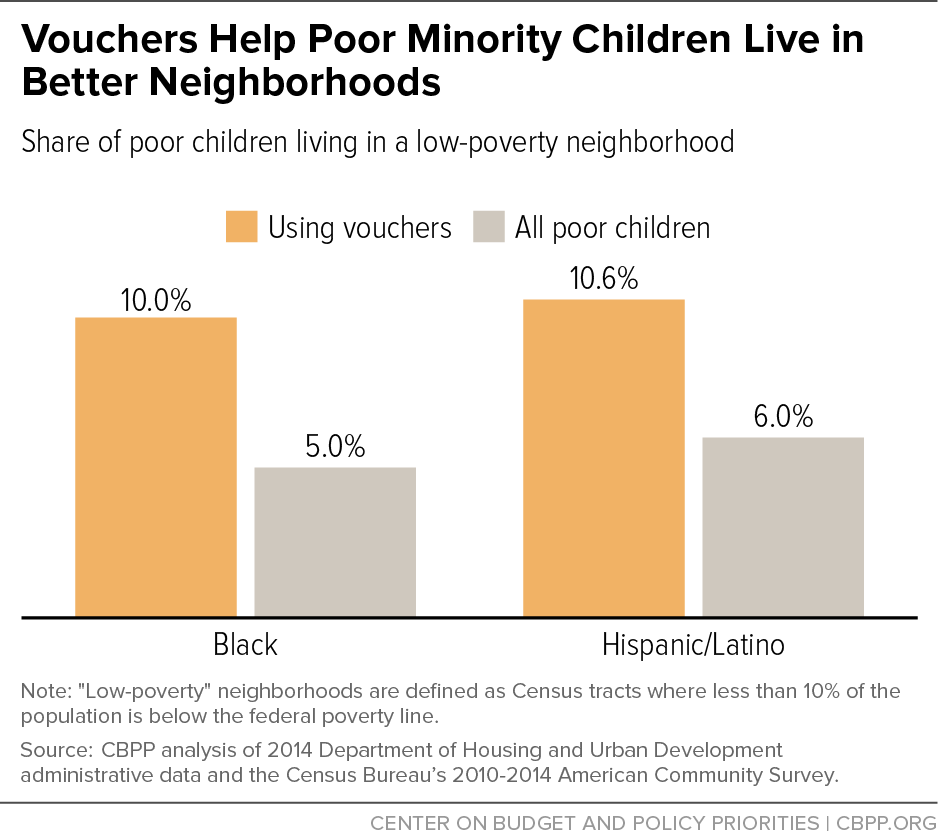 Children whose families use vouchers to move to low-poverty neighborhoods when they are young are far more likely to attend college and less likely to become single parents, according to recent groundbreaking research; they also earn significantly more as adults.

Also, adults in low-income families that use vouchers to move to less poor neighborhoods are less likely to suffer from depression, psychological distress, extreme obesity, and diabetes than similar adults in families that did not receive vouchers.

Helping all low-income families to thrive in stable, affordable homes in safe communities should be a major goal of federal, state, and local policy.  There are many ways to achieve this goal, including significantly expanding the Housing Choice Voucher program — as the Bipartisan Policy Commission and Children’s Defense Fund propose — and creating a new renters’ tax credit. Policymakers could offset the cost of achieving this goal by rebalancing federal housing policy to direct more scarce resources to the families that most need help.  Finally, policymakers should revise voucher policies to make it easier for families with vouchers to live in safe, low-poverty neighborhoods with good schools.