Medicaid enrollment rose 10.9 percent from February to September in the 36 states for which we have data, as millions lost their jobs or suffered sharp income losses due to the COVID-19 recession. If we extrapolate these increases nationwide, it would mean about 7 million more people enrolled in Medicaid — and likely more, given continued increases in October in states with available data. The growing need for Medicaid coincides with a large state budget crisis, which has already prompted some states to cut Medicaid (as described below) and will likely prompt more to do so unless the federal government provides more aid to states.

Before COVID-19 and the recession, Medicaid enrollment was flat or falling in most states. It has risen steadily since then, as the figure below shows. 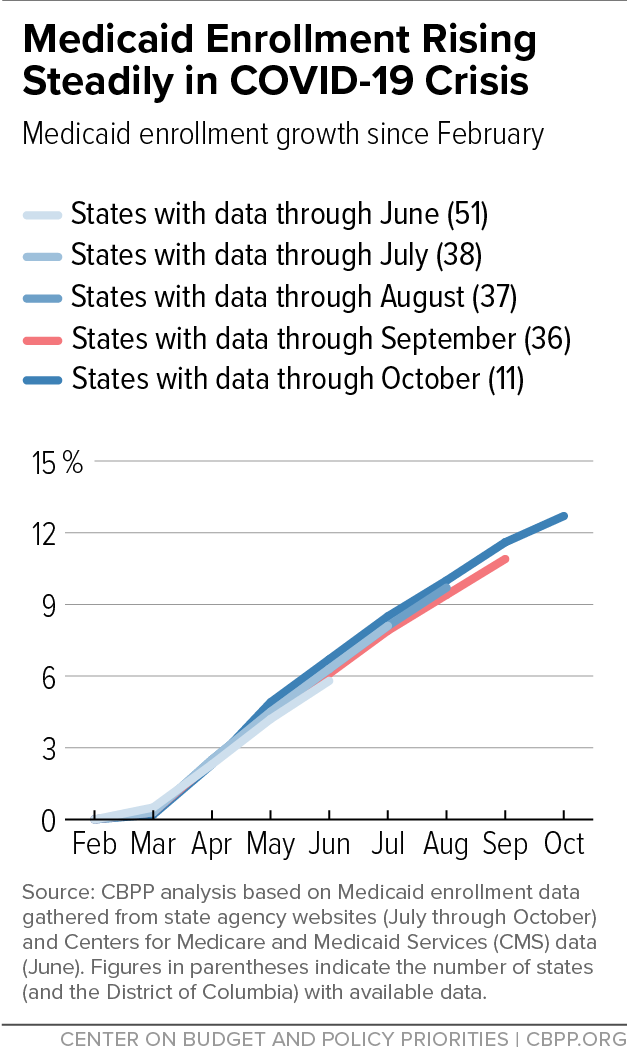 These data include groups for whom enrollment is generally not shaped by economic conditions, such as elderly people and people with disabilities who are enrolled in both Medicare and Medicaid. Enrollment increases among adults covered through the Affordable Care Act’s Medicaid expansion have been much larger, with Medicaid providing a safety net as millions of adults have lost jobs or income. Through September, expansion enrollment rose 18 percent in the 22 states that track such data; if extrapolated nationwide, that would amount to more than 2 million people.

These Medicaid enrollment figures are based on preliminary estimates from state websites, as of November 4. Complete enrollment figures for all states from the Centers for Medicare & Medicaid Services (CMS) are available only through June, but the state-reported data to which we have access largely match the trends in the CMS data for the months for which both are available, as shown in the figure.

We included further details and sources in an earlier analysis, which this blog post updates. These are the states for which we now have data, and through which month:

These increases are almost certainly mitigating the large spikes in uninsurance rates that would otherwise occur as millions lose job-based coverage or can’t afford private plan premiums due to the recession. But enrollment growth is also adding to state budget pressures. Already, some states have made or are considering Medicaid cuts, including reductions in provider payments, reversals of planned and needed coverage improvements, and furloughs and hiring freezes affecting workers who determine eligibility. And other states are considering cutting provider payments in the months ahead, a Kaiser Family Foundation survey of state Medicaid officials found. As states exhaust their options to defer budget cuts, they will likely proceed with these and other cuts to Medicaid and other health programs unless federal policymakers provide more funds and maintain strong protections for Medicaid enrollees.

With Need Rising, Medicaid Is at Risk for Cuts

September 23, 2020
PreviousThe Many Risks of the ACA Repeal Lawsuit — a Rundown
NextProvide Adequate SNAP Funding for Fiscal Year 2021
Stay up to date
Receive the latest news and reports from the Center