Medicaid enrollment is rising and expected to remain well above pre-crisis levels until the economy recovers. The Families First Coronavirus Response Act, enacted in March, temporarily increased the federal government’s share of Medicaid costs (known as the federal medical assistance percentage, or FMAP) to help states deal with the increased enrollment as well as their large budget shortfalls due to the public health and economic crises. As in prior recessions, states are prohibited from cutting Medicaid eligibility while receiving the additional federal funds. In addition, because the public health crisis makes it especially important that people have health coverage, Families First includes a “continuous coverage” provision preventing states that receive the FMAP increase from terminating people’s coverage during the public health emergency.

Unfortunately, efforts continue to convince Congress to weaken this requirement. Opponents argue that requiring continuous coverage forces states to cover large numbers of people who don’t need Medicaid and that, as a result, enrollment increases due to the requirement cost states more than they receive from the increased FMAP.[1] Neither is the case.

"Weakening continuous coverage would cause likely hundreds of thousands of people to lose coverage and become uninsured."Medicaid enrollment is increasing primarily because millions of people who have lost their jobs and their job-based coverage are becoming newly eligible, and people on Medicaid who might have found jobs or better-paying jobs in a stronger economy are remaining eligible. The continuous coverage provision does contribute to enrollment increases, but primarily by preventing gaps in coverage that occur when eligible people don’t complete paperwork on time or when people with low incomes experience fluctuations in their earnings.

As both the public health and economic crises continue and deepen, policymakers should further increase the FMAP to help states meet the costs of increased enrollment, address their budget shortfalls, and avoid harmful Medicaid cuts. Weakening continuous coverage would cause likely hundreds of thousands of people, including many who have recently lost their jobs, to lose coverage and become uninsured.

Continuous coverage — letting people keep their Medicaid coverage for a set period, irrespective of changes in their circumstances — isn’t a new concept, and there’s ample precedent for it in Medicaid. Under the “continuous eligibility” option, states have been able to allow children to stay enrolled in Medicaid and the Children’s Health Insurance Program (CHIP) for 12 months regardless of changes in their families’ income since CHIP’s enactment in 1997. To date, 23 states have adopted continuous eligibility for children in Medicaid, and 25 have adopted it for CHIP.[2] States can also provide continuous eligibility to adults through a Medicaid waiver, as Montana and New York have done.

Continuous eligibility helps eligible people maintain coverage, prevents coverage disruptions for people with volatile incomes, and reduces Medicaid administrative costs, without causing an enrollment surge among people with other coverage options, evidence shows. It “ensures that children can receive appropriate preventive and primary care as well as treatment for any health issues that arise,” the Centers for Medicare & Medicaid Services (CMS) explains, and “reduces state time and money wasted on unnecessary paperwork and preventable care needs.”[3] The non-partisan Medicaid and CHIP Payment and Access Commission has recommended that Congress create a continuous eligibility option for adults in Medicaid so states could adopt it without a waiver, concluding that the option would reduce “churning [in and out of coverage] and the negative health effects that may result.”[4]

Churn occurs when people lose Medicaid and then re-enroll within a short period of time. It’s a problem because it usually indicates that people are experiencing spells of uninsurance, with corresponding interruptions in access to care. Disenrollment and re-enrollment also increase administrative costs. Recent research finds that continuous coverage for children reduces the share of children experiencing gaps in coverage, increases the share accessing preventive care, and reduces the share with unmet medical needs.[5] That’s likely because it addresses the major factors contributing to churn.

Without continuous coverage, states frequently require eligible people to submit paperwork demonstrating their continued eligibility. Research and decades of experience in enrolling low-income children and adults show that increasing paperwork leads eligible people to lose coverage due to difficulties completing processes and providing documentation. For example, when Washington State in 2003 began requiring children to renew eligibility every six months and made other process changes, the number of children in Medicaid fell by 30,000 over the next two years; when the state restored 12-month eligibility, children’s enrollment rose by 30,000 within a year.[6] Likewise, the recent study of continuous eligibility for children found that the policy reduced the number of children experiencing gaps in coverage due to application problems.[7]

Prior to the current crises, declines in Medicaid enrollment and increases in the number of uninsured raised concerns that the Trump Administration’s emphasis on periodic eligibility checks was increasing churn.[8] The danger is even greater now with eligible, newly unemployed people at risk of losing coverage due to wage checks against outdated data from when they were employed.

Many low-income people experience frequent income fluctuations that can make them ineligible for Medicaid temporarily when their income rises above 138 percent of the poverty line for short periods.[9] Low-wage jobs are often unstable, with frequent job losses and work hours that can change from month to month. A study of working-age adults participating in SNAP (formerly food stamps), which has federal income limits close to those of the Affordable Care Act’s Medicaid expansion, found that workers earning low wages are frequently in and out of work and on and off SNAP as their earnings fall and rise.[10] A similar study of Medicaid participants showed similar income volatility.[11] Income fluctuations are especially likely during the pandemic as many businesses close and reopen only to close again.

Requiring people with volatile income to frequently shift among different forms of coverage is counterproductive. Most people won’t transition successfully to marketplace or employer-based coverage for the months in which their income exceeds Medicaid limits; instead, they will become uninsured and experience disruptions in access to care before re-enrolling in Medicaid when their income drops. While Medicaid expansion reduced churn for adults in expansion states, 75 percent of adults who did lose coverage in expansion states and 81 percent in non-expansion states became uninsured, according to a recent study.[12]

Medicaid enrollees who no longer qualify for the program under coverage categories based on age or pregnancy often remain eligible under a different category. But at key points for babies, young adults, and mothers, the transition isn’t always smooth, and eligible people can lose coverage. Babies born to mothers enrolled in Medicaid are automatically and continuously eligible until they turn 1. At that point they should transition into children’s coverage, but data reported to CMS suggest that large numbers of babies aren’t making the transition and are likely losing Medicaid.[13] Similarly, some young people who “age out” of Medicaid children’s coverage when turning 19 lose eligibility, when they should transition to adult coverage in expansion states.[14] And while women eligible under Medicaid’s pregnant women category lose eligibility 60 days after their pregnancy ends, many women remain eligible as parents but fail to make the transition.

The Families First continuous coverage provision keeps these individuals enrolled during the public health crisis. In particular, it prevents young adults and women who have recently given birth from losing Medicaid coverage until the public health emergency ends.

Opponents claim that the continuous coverage provision forces states to cover large numbers of people who do not need Medicaid, causing enrollment and costs to skyrocket and eliminating any benefit from the FMAP increase in Families First.[15] Continuous coverage likely is increasing enrollment, but it’s almost certainly not the primary driver of the enrollment spikes many states are seeing. While comprehensive data are not yet available, much of the enrollment increase reflects more people newly entering Medicaid, with a number of states reporting surging applications and enrollment.[16] States are experiencing a decline in Medicaid exits, but during the current crisis, far fewer people would likely have been determined ineligible for Medicaid at renewal even without the continuous coverage requirement, since relatively few people are finding jobs, getting raises, or working additional hours. California estimates, for example, that 80 percent of its enrollees who would ordinarily lose eligibility in a month will remain eligible because of increased unemployment.[17]

The Families First continuous coverage provision is likely increasing total state Medicaid costs by an even smaller amount, since enrollment by seniors and people with disabilities, who account for a large share of costs, will be largely unaffected. (These groups experience much less churn.) But even supposing the Families First provision increased total state Medicaid expenditures by 3 percent, the cost would still fall far short of the $40 billion increase in annual federal funding states receive under the enhanced FMAP.

Outweighing the increased federal and state expenditures due to the continuous coverage provision, and any small enrollment increase by people who would otherwise have other coverage, are the benefits of keeping eligible people and low-income people with volatile incomes enrolled during the current pandemic. Coverage changes are associated with changes in physicians, increased use of the emergency room, and decreased medication adherence.[19] People who churn in and out of coverage have higher health care costs, some studies suggest, due to pent-up demand for health care services after a period of ineligibility.[20] Churn also creates problems for health care providers and Medicaid managed care organizations, limiting their ability to provide effective care and increasing their administrative costs (such as the cost of processing new applications) as people cycle in and out of coverage.[21]

Continuous coverage also has benefits for both state and local agencies and for Medicaid enrollees who stay enrolled. The COVID-19 emergency is putting intense pressure on agencies that administer Medicaid. They face increased demand as more people become eligible for Medicaid, and some agencies have far less capacity as they close eligibility offices to achieve social distancing and many caseworkers take time off to address their own health concerns or meet caregiving responsibilities. Continuous coverage allows these agencies to focus on enrolling eligible people rather than following up on data checks that would likely only glean outdated information for many enrollees, especially given the resurgence of COVID-19 in many states.[22]

[1] See, for example, Chris Jacobs, “How Congress’ Coronavirus Legislation Could See Millionaires on Medicaid,” April 27, 2020, https://chrisjacobshc.com/2020/04/27/how-congress-coronavirus-legislation-could-see-millionaires-on-medicaid/; and Jonathan Ingram and Nicholas Horton, “States are about to be hit by a Medicaid Tidal Wave,” Foundation for Government Accountability, June 10, 2020, https://thefga.org/research/covid-19-medicaid/, an analysis that projects very large Medicaid enrollment increases based on an unexplained “proprietary” model.

[14] Prior to the ACA’s Medicaid expansion, more than 42 percent of young adults aging out of Medicaid or CHIP became uninsured. “Aging Out of Medicaid: What Is the Risk of Becoming Uninsured?” Kaiser Family Foundation, March 2010, https://www.kff.org/wp-content/uploads/2013/01/8057.pdf. 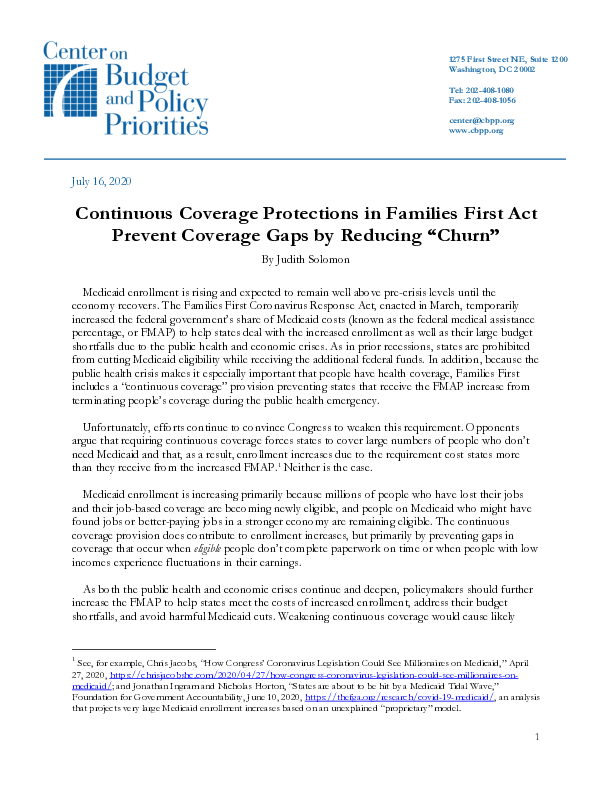