Medicaid Coverage Protections in Families First Act: What They Require and How to Implement Them

The Families First Coronavirus Response Act temporarily increased the federal government’s share of Medicaid costs (known as the federal medical assistance percentage, or FMAP) to help states deal with the impact of the COVID-19 public health and economic crises. States accepting the additional funds agree to “maintenance of effort” (MOE) protections that prohibit them from making their Medicaid eligibility standards and eligibility determination procedures more restrictive, and from terminating people’s coverage until the Secretary of Health and Human Services declares an end to the official public health emergency.

No New Restrictions on Eligibility

The MOE restricts states from making their Medicaid eligibility standards, methodologies, and procedures more restrictive than those in effect as of January 1, 2020, and prohibits states from imposing new or increased premiums different from any premiums in place on that date.[1] States can still change their rules to make it easier for people to qualify and enroll in coverage.

This part of the MOE is straightforward, preventing states from increasing their income and asset standards, changing how they determine countable income and assets, and changing the procedures they use to determine eligibility if those changes make it harder for people to qualify, get enrolled, and stay enrolled.

Guidance from the Centers for Medicare & Medicaid Services (CMS) on an identical MOE provision in the American Recovery and Reinvestment Act (ARRA) of 2009 states that “CMS would consider changes in State eligibility policies to be more restrictive if the changes result in determinations of ineligibility for individuals who would have been considered eligible as of July 1, 2008.”[2] That same test should apply to the current MOE with an operative date of January 1, 2020.

Applicable ARRA guidance also provides that reducing the number of slots in state home- and community-based services (HCBS) waivers would violate the MOE, because fewer people would be eligible. Similarly, making it harder for people to qualify for HCBS by increasing the level of care they need to qualify would also be an MOE violation.

To receive the enhanced FMAP, states must maintain Medicaid coverage for anyone who was enrolled on March 18, 2020, or who enrolls after that date, through the end of the month when the public health emergency ends. The only exceptions are for individuals who voluntarily terminate their coverage and those who no longer reside in the state or die. A CMS FAQ addresses multiple situations implicating the continuous coverage provision.[3]

When the Continuous Coverage Requirement Applies

States still may transition enrollees who are no longer eligible in their current coverage pathway to a different pathway that provides the same benefits or additional benefits. But states generally must maintain current benefits for enrollees who no longer qualify for Medicaid or qualify for a pathway with lesser benefits. This means that the continuous coverage requirement applies to:

Other circumstances when coverage must continue include:

The continuous coverage requirement does not apply to individuals who are not enrolled in Medicaid or are only enrolled temporarily, including:

States have the option to provide full Medicaid coverage to all lawfully residing children and pregnant women regardless of whether they have a specific immigration status that would qualify them for Medicaid.[6] Eligibility for these children and pregnant women is broader than for other lawfully residing immigrants who must have a specific immigration status to qualify for full coverage. If they do not have such a status, federal funds are only available to pay for treatment of emergency medical conditions. For example, many lawfully residing immigrants aren’t eligible for Medicaid during their first five years in the United States.

CMS has issued guidance saying that the Families First MOE does not allow children and pregnant women receiving comprehensive coverage under the state option to retain that coverage when they no longer qualify as a child or a pregnant woman if their immigration status doesn’t qualify them for full Medicaid coverage. Instead, they would only retain coverage for treatment of an emergency medical condition.

The continuous coverage provision allows Medicaid agencies to suspend certain activities and redirect resources to focus on new applications. States should take advantage of that flexibility, particularly given the increased need for coverage due to the economic crisis and the challenges facing state eligibility workers because of the public health emergency and associated social distancing measures.[7] This flexibility is temporary, though, and states should also prepare for an orderly transition back to regular activities when the current provisions end.

While the Families First Act clearly prohibits ending coverage for most enrollees during the public health emergency, states have flexibility on how they deal with their Medicaid caseloads during this period. CMS guidance allows states to continue renewals and periodic data matching, but a far better course is to suspend these activities and direct all available resources toward processing new applications.

States can push forward renewal dates in their systems to avoid triggering notices, forms, or other renewal actions. States may continue automated ex parte renewal processes and renew coverage for those whose continuing eligibility is confirmed through electronic data sources, but to avoid confusion, states shouldn’t send renewal forms to enrollees whose coverage can’t be automatically renewed since their coverage can’t be ended. States should also suspend all actions based on periodic data matches. Not only does the MOE prevent them from acting on the information in the matches, but the information will often be outdated and inaccurate with so many enrollees experiencing job loss or drops in income during the economic downturn.

If a state continues to conduct renewals or periodic data matching, it must ensure its eligibility system doesn’t end coverage for enrollees due for renewal, including for failing to respond to a renewal notice or request for information. Similarly, states must not end coverage for enrollees due to information from periodic data matches, including for failure to respond to a request for information based on the data match.

After the Public Health Emergency

States will face a large backlog of renewals and other case actions at the end of the public health emergency. If the state attempts to deal with the backlog all at once, it will likely be overwhelmed and unable to timely process renewal forms, leading eligible people to lose coverage. Moreover, compressing renewals into one or a few months will lead to an ongoing, disproportionate distribution of work in future years, causing challenges for workload management.

Similarly, if a state attempts to process all cases that had a change in circumstance during the public health emergency immediately after the continuous coverage provision expires, it will likely have trouble keeping up with responses, appeals, and new applications.

States should therefore stagger renewals over a 12-month period following the public health emergency. This will allow them to keep up with renewals and other changes while ensuring an even distribution of work across months for that year and into the future.

In addition, as state Medicaid agencies prepare for the end of the continuous coverage provision, they should consider the following:

CMS hasn’t issued guidance on how states should transition to normal operations. When it does, it should require states to both carefully assess eligibility for current enrollees and stagger renewals to ensure that procedural issues don’t lead to massive coverage losses.

[1] The MOE doesn’t apply to the Children’s Health Insurance Program (CHIP), although a separate MOE generally preventing states from restricting eligibility for CHIP remains in place through September 30, 2027. Section 2105(d)(3) of the Social Security Act.

[5] If the state determines the individual does not have an eligible citizenship or immigration status, coverage may be limited to treatment of emergency medical conditions.

[6] States can choose whether to continue coverage for children until they turn 19, 20, or 21. 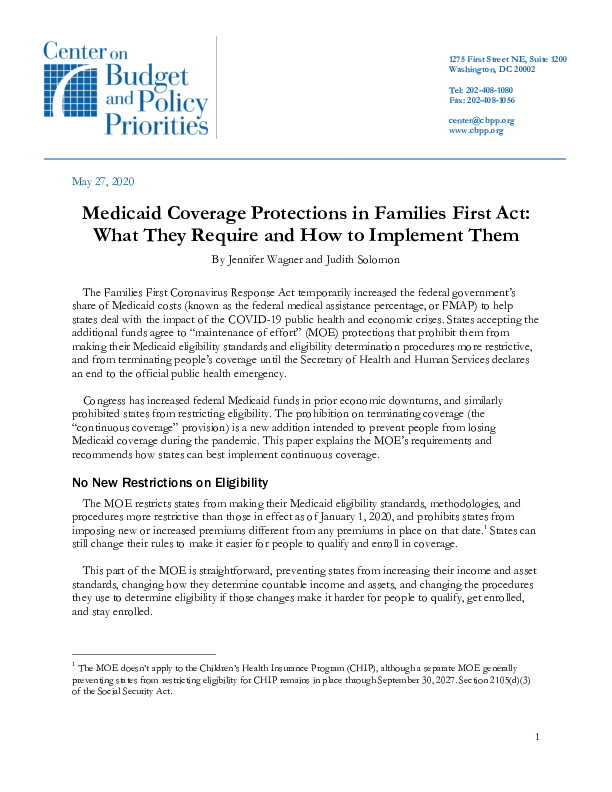