States received a temporary increase in federal Medicaid funding in the Families First Coronavirus Response Act. In exchange, they can’t impose new Medicaid eligibility restrictions or take away people’s coverage during the public health emergency — requirements referred to as “maintenance of effort” (MOE) protections. Additional legislation to provide a much-needed sustained boost in federal Medicaid funding to states should continue to guard against eligibility or coverage restrictions.

The Health and Economic Recovery Omnibus Emergency Solutions (HEROES) Act, which House Democratic leaders introduced this week, provides an additional temporary increase in the federal share of Medicaid funding (the federal medical assistance percentage, or FMAP), and ensures that additional funding and MOE protections will continue at least through June 30, 2021. Unfortunately, it also creates a partial MOE exception for New York, a response to Governor Andrew Cuomo’s complaints about the Families First MOE. That exception would let New York implement new eligibility restrictions during the public health crisis. Adding to that concern, federal policymakers may face pressure to broaden the exception and apply it to other states, which could cause hundreds of thousands of people or more to lose coverage during the public health and economic crises.

States, which must balance their budgets each year, often seek to cut Medicaid during recessions as one way to close budget gaps. Strong MOE protections are crucial to protecting health coverage from such cuts, the historical record shows. The maps below contrast state actions to restrict Medicaid eligibility during the state budget crunch following the 2001 recession as compared to state actions in the Great Recession. The earlier downturn had a far smaller impact on state budgets. Yet 40 states restricted Medicaid eligibility in the early 2000s, while just four did during and after the Great Recession. Cuts in the early 2000s were widespread: among states that already had lean programs, most added further restrictions, but even states that were generally committed to maintaining and expanding health coverage made cuts in response to budget pressures.

A key reason for the difference between the two periods is clear: MOE protections were in place during and after the Great Recession, but only briefly after the 2001 recession, when policymakers increased the FMAP only from mid-2003 through mid-2004. This increase came with MOE protections but, because the increase and accompanying MOE protections came so late (and were in effect for such a short period), the protections generally limited cuts only for state fiscal year 2004.

In contrast, the 2009 Recovery Act and subsequent legislation increased the FMAP for 2009 through 2011. Along with the MOE, the additional federal funding itself helped states avoid or mitigate Medicaid cuts. But the MOE was crucial. Despite the additional funding, states still cut health care benefits and provider payments — though less than they otherwise would have — but the MOE largely protected eligibility and kept people covered.

States are now facing substantially greater budget shortfalls than during the Great Recession. If MOE protections are weakened, many states will likely cut coverage in response to these shortfalls, as they did in the early 2000s. Some would cut costs by adding more paperwork and red tape to make it harder for people to establish their Medicaid eligibility or show they’re still eligible. Such policies could affect all groups of Medicaid enrollees, including children, and could substantially reduce coverage. Various states adopted documentation and verification policies over the past few years — even before facing budget pressures — that contributed to significant enrollment declines for both children and adults. Other states might cut coverage for “optional” populations that they aren’t required to cover under federal law, including certain low- and moderate-income seniors and people with disabilities.

While the HEROES Act generally would continue the strong MOE protections of the Families First Act, it makes an exception for state policies signed into law on April 15, 2020. That exception is designed to let Governor Cuomo implement new restrictions on eligibility for Medicaid home- and community-based services that were included in New York’s budget. Without the exception, New York would need to postpone implementation of these policies until the additional federal Medicaid funding expires.

Limiting eligibility for home- and community-based services (which include supports such as home health aides and personal care assistants) during the public health crisis could make it harder for seniors and people with disabilities to remain in their homes at a time when they’re generally much safer receiving care in their homes than in nursing homes and when many families are taking their loved ones out of nursing homes but need help caring for them at home.

Even more troubling, policymakers will likely face pressure to broaden the HEROES Act exception to let more states introduce eligibility restrictions. Senate Republicans sought to weaken the Families First MOE as part of the CARES Act, and some on the right of the political spectrum have continued to urge Congress to weaken or eliminate it. Letting many or all states introduce new restrictions would likely cause hundreds of thousands — or more — people to lose coverage. Harmful at any time, such coverage losses would be especially damaging during the public health crisis. They could prompt even more people to avoid seeking testing and treatment for COVID-19 due to concerns about cost.

Instead of broadening the New York exception, policymakers should discard it and keep the Families First MOE’s prohibition on coverage restrictions fully intact. States would receive over $100 billion in additional federal funding from the combination of the Families First FMAP increase and the additional increase proposed in the HEROES Act. New York alone would receive billions of dollars in assistance — many times what the state expects to save from the Medicaid changes it would have to delay until the FMAP increase and MOE end.

It’s eminently reasonable for the federal government to require states receiving increased federal funds not to take away people’s coverage or make it harder for them to enroll. These requirements are crucial to protecting coverage both for those covered by Medicaid today and for those who will need Medicaid as they lose jobs or income in coming months. 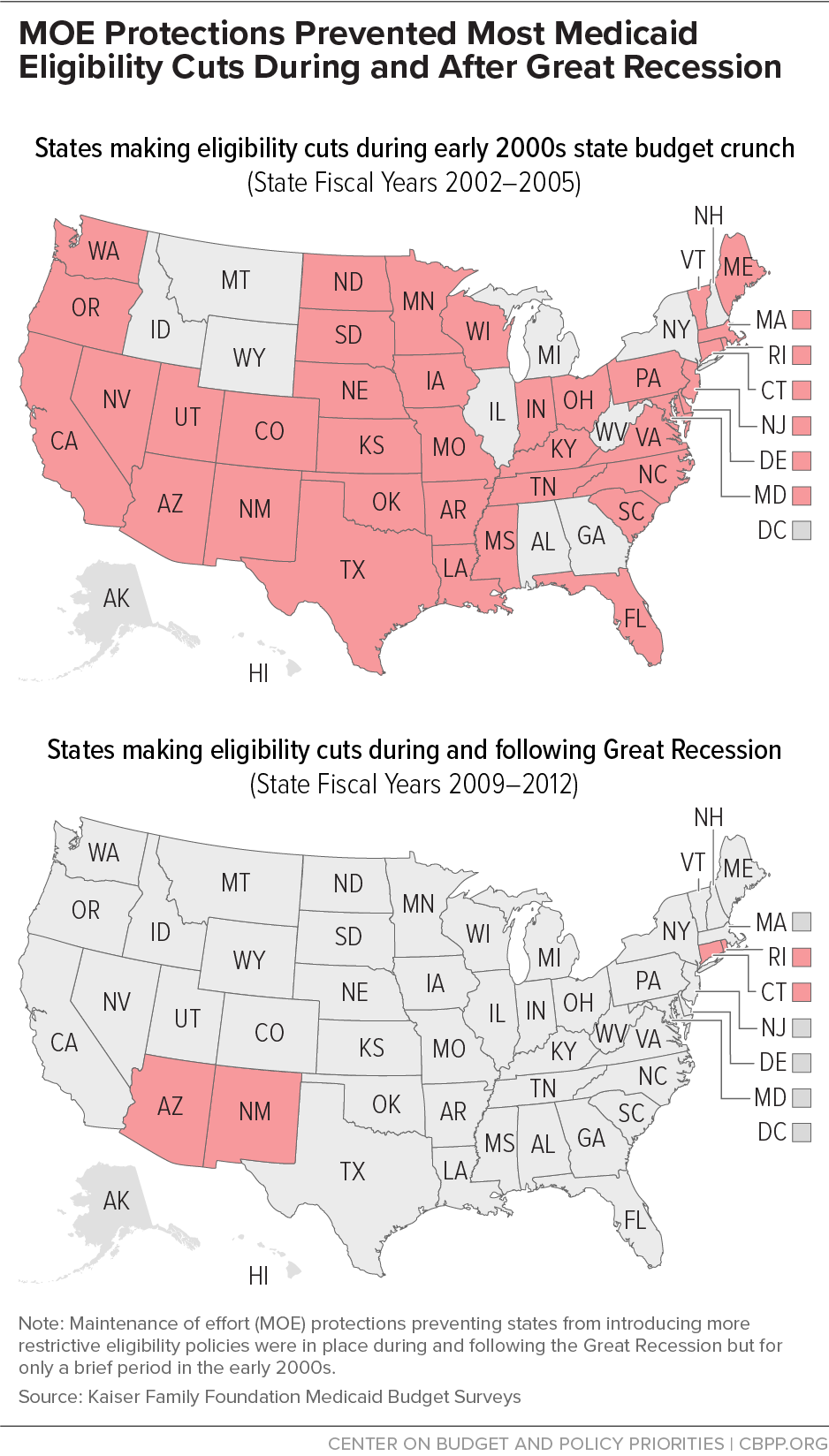