Instead of Boosting Working-Family Tax Credit, GOP Tax Bill Erodes It Over Time

The Republican tax bill not only squanders an important opportunity to help working families by strengthening the Earned Income Tax Credit (EITC), but it also permanently erodes the EITC’s value over time by adopting a different measure for adjusting tax brackets and certain tax provisions each year to account for inflation (known as the “chained” Consumer Price Index or CPI). That’s especially striking given the bill’s large tax cuts for the wealthy and profitable corporations. In recent decades, incomes have stagnated among working-class households (that is, families with working-age adults in which no one has a college degree) while they’ve risen more robustly for those with more education. The median income for a working-class family of three — now roughly $49,000, after accounting for taxes and government benefits — would be about $10,000 higher if their income had grown since 1979 at the same rate as a similar household with a college degree.

If President Trump and congressional Republican leaders had placed a priority on raising working families’ incomes, they could have made significant progress through the tax bill, which reallocates trillions of dollars. And a logical approach would have been to expand the EITC, which has decades of bipartisan support for encouraging and rewarding hard work. Proposals from Senator Sherrod Brown, Senator Michael Bennet, Rep. Ro Khanna, Rep. Richard Neal, and others would do just that. House Speaker Paul Ryan himself has advanced a modest proposal to expand the EITC.

Yet neither the President nor GOP congressional leaders advanced any such proposal in developing their tax bill. And while GOP leaders’ overview of the final bill says that it “[m]aintains the Earned Income Tax Credit to provide important tax relief for low-income Americans working to build better lives for themselves,” the bill doesn’t even do that.

Its adoption of the chained CPI means that the maximum EITC will rise more slowly over time than under current law, eroding the credit’s value for millions of working-class people. As the chart shows, a married couple making $40,000 with two children would see their EITC shrink by $319 in 2027 (from $4,994 to $4,675). 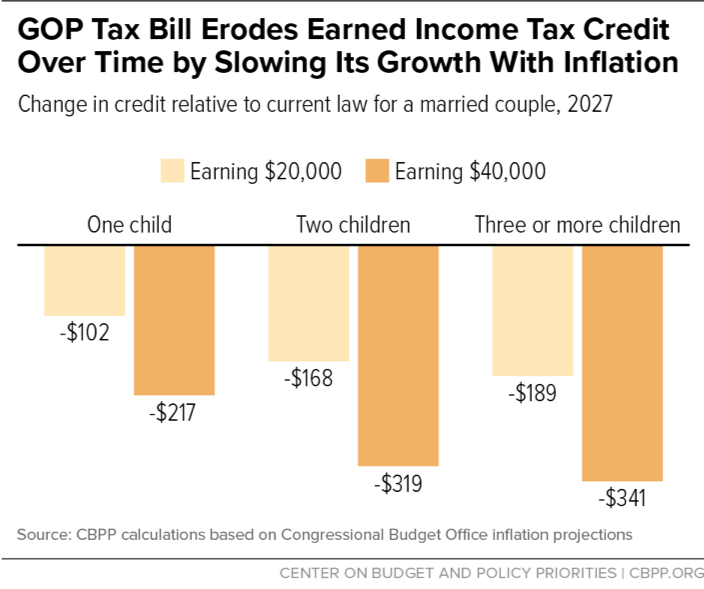 Moreover, the change is permanent. The tax increases resulting from the bill’s adoption of the chained CPI, along with its repeal of the individual mandate requiring most people to have health coverage or pay a penalty (which would raise premiums and cause 13 million more people to become uninsured), are the bill’s only major individual tax changes that are permanent. All of the bill’s tax cuts for individuals expire after 2025.

Moreover, the bill makes the chained CPI and repeal of the individual mandate permanent in order to help cover the long-term cost of its corporate tax cuts, which the bill also makes permanent.

Tax Bill’s Cost Could Hit $2.2 Trillion Over Next Decade

December 18, 2017
PreviousRepublican Leaders’ Broken Promises on Taxes, the Budget, and Health
NextFunding for State Reinsurance Programs Can’t Replace Individual Mandate
Stay up to date
Receive the latest news and reports from the Center