Social Security Administration (SSA) administrative funding would face more cuts under the House and Senate committee-approved appropriations bills for 2016, which would mean more cuts to staffing and field office hours, longer waits for appointments and phone calls, and more backlogs for disability appeals and other critical work.  That’s the human cost of the tight caps set by the 2011 Budget Control Act, further reduced by sequestration.

Even without adjusting for inflation, the Senate Labor-HHS-Education bill would cut nearly $250 million from SSA’s regular administrative funding, compared with 2015 — harsher even than the House bill, which would freeze funding at 2015 levels.  The Senate bill would push SSA’s administrative funding lower than it’s been since 2009.  Squeezing the SSA budget this way means that it can’t keep up with inflation and aging of the population — which is particularly acute for Social Security, as the baby boom reaches its peak retirement and disability years.

SSA — and the tens of millions of people who rely on their hard-earned Social Security benefits — are already struggling under budget cuts (see chart).  Chronic underfunding has led to cutbacks in staffing and field office hours, while at the same time increasing wait times for appointments and hold times for SSA’s 800 number.  It’s also led to backlogs in critical work, like disability appeals and the continuing disability reviews that save money and ensure SSA’s benefits go only to the people who need them most.  The Senate’s proposed cuts would only make matters worse.

A better alternative is the President’s proposal, which would increase the SSA budget by over $600 million — enough to cover inflation and restore some of the ground lost since 2010.  Critically, the President’s budget paves the way for this increase by providing sequestration relief, balanced responsibly with other savings.  Congress should do the same. 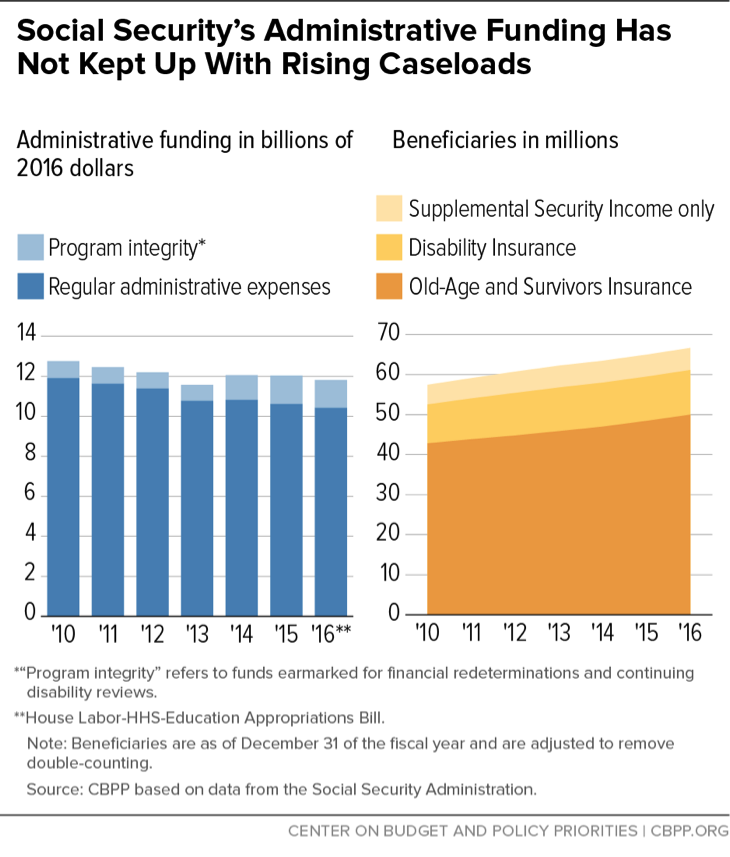 February 3, 2015
PreviousFederal Support for Most State and Local Programs Headed to 50-Year Low
NextDI Beneficiaries Have Extensive Work Histories
Stay up to date
Receive the latest news and reports from the Center