In fact, it’s the House’s refusal in recent years to fully fund this type of program integrity work under the 2011 Budget Control Act (BCA) — part of an unfortunate pattern of congressional underfunding of these types of activities in a host of agencies — that has contributed to the backlog that the majority leader now deplores.

Continuing disability reviews are labor intensive, requiring expert evaluation of the recipient’s medical condition.  SSA must balance this workload against its other responsibilities, such as processing new benefit applications, handling Medicare enrollment, issuing Social Security numbers and replacement cards, and recording workers’ earnings (for calculating their future Social Security benefits).  Without adequate funding, SSA can’t hire the staff needed to complete the reviews on a timely basis while conducting these other essential tasks.

The BCA imposes caps on annual appropriations but allows specified amounts of extra funding each year for SSA program integrity activities and activities to fight health care fraud and abuse.  These special funding increases, which come on top of the base funding for these activities, are outside the BCA caps.  Policymakers allowed for these funding increases because the Congressional Budget Office, the Administration, and most experts agree that certain program integrity activities save much more money than they cost.  Continuing disability reviews conducted in 2012 saved an estimated $14.60 for every $1 they cost, by ending payments to beneficiaries who’ve recovered from their impairments.

In 2012 and 2013, however, Congress approved considerably less money for Social Security program integrity than the BCA allowed.  While the funding bills for those years approved by the Senate Appropriations Committee made full use of the BCA allowances, the amounts shrank in negotiations with the House.  As Kathy Ruffing noted last year, full funding in those two years would have saved an estimated $2.5 to $3.5 billion in future costs for Social Security, SSI, Medicare, and Medicaid.

Only in 2014 did Congress enact the full amount allowed by the BCA, which SSA estimated would allow it to conduct 81,000 more continuing disability reviews than the previous year.

Program integrity activities related to health care have fared even worse.  These activities address erroneous payments and outright fraud in Medicare and Medicaid, including hospitals and doctors that improperly bill these programs; in 2011-2013 they returned $8.10 in savings for each dollar spent.  For the past three years, the Senate Appropriations Committee approved the full additional funding allowed under the BCA but all of it was eliminated during final negotiations with the House (see chart). 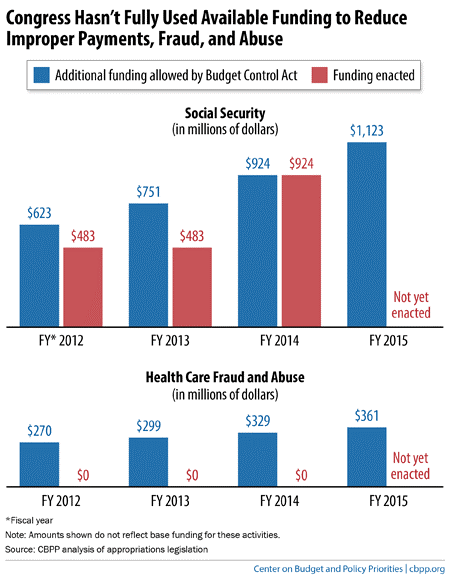 The House’s penny-wise, pound-foolish approach also extends to tax enforcement.  The President has proposed giving the Internal Revenue Service extra funding to step up tax enforcement and reduce the “tax gap” (the hundreds of billions of dollars in taxes that are legally owed each year but go unpaid).   Here again, funding these activities would reduce the deficit.  The Treasury estimates that every additional dollar invested in IRS tax enforcement activities yields $6 in increased revenue.  And, here again, the House has consistently refused.

We strongly agree with Majority Leader McCarthy that SSA should reduce its backlog of continuing disability reviews.  Fortunately, when Congress returns, it can do something to reduce deficits and improve program integrity — not only at SSA, but also in health care programs — by approving the full funding allowed for these activities for fiscal year 2015.