By law, SSDI requires that beneficiaries have a severe, well-documented medical impairment that not only prevents them from doing their old job but from doing any job — regardless of whether that work exists in their area, or whether they’d be hired to do it.

The researchers, Mathematica’s Jody Schimmel Hyde and April Wu, tracked people who were rejected at the initial level (their state’s Disability Determination Service, or DDS). Everybody in their sample was 50 or older (the average age was 59), had worked enough to be insured for SSDI, and, as required by law to qualify for benefits, had already waited at least five months after the onset of their disability.

Employment rates fell most steeply for rejected applicants who came closest to qualifying: those deemed by their state’s DDS to be too severely impaired to do their past work, but capable of switching to other work. Few did. (See graph.) 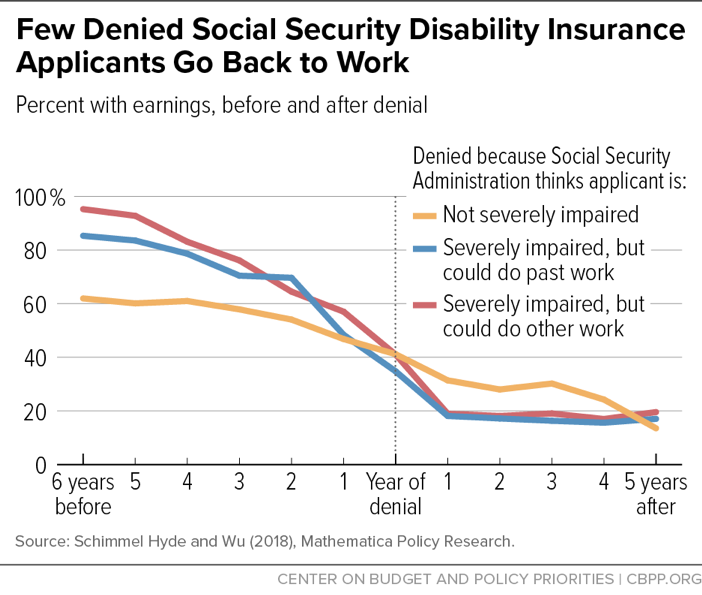 Over half of rejected applicants went on to get Social Security (disability or retirement) benefits before their full retirement age (65 or 66 for this sample) — either by successfully appealing their denial, filing a new disability application, or choosing early retirement with reduced benefits, the authors also found.

The new study adds to a body of research that has found dim labor-market and economic outcomes for denied SSDI applicants. A pioneering 1989 Government Accountability Office study documented that people denied SSDI benefits in the harsh Reagan-era crackdown seldom worked again, suffered steep earnings declines if they did work, and had high poverty rates.

More recently, studies published in 2011 and 2015, which we summarized here, found large drops in work and earnings among rejected SSDI applicants. (Furthermore, those studies excluded many people who appealed their denial or who later reapplied, so those who remained were probably more able — and more likely to work — than the broader group that Schimmel Hyde and Wu studied.)

In short, many denied applicants suffer great economic harm from their disability but nevertheless don’t qualify for benefits. Indeed, the United States has some of the most stringent eligibility criteria for disability benefits among advanced economies, and it spends less than most. SSDI cushions but hardly eliminates the losses that breadwinners face when they suffer a severe impairment.

Van de Water: Work Expectations for Disability Recipients Should Be “Realistic and Grounded in Experience”