Claims of State "Windfalls" from Federal Tax Changes Are Overstated

Claims that most states will receive a revenue “windfall” from the recent federal tax changes due to their tax codes’ interaction with the federal one are overstated, our major new report explains. At least some states will lose revenue, and most states will see modest revenue gains at best, according to early estimates. The real windfall from the recent federal tax law will go to corporations and the highest-income households, whose annual tax cut will vastly exceed any revenue gain for states.

The revenue implications for states vary widely. Roughly eight states will lose revenue, even before taxpayers and corporations uncover new loopholes in the hastily drafted federal law, unless they take steps to avoid the damage. Another dozen states will see no effect, at least on the personal income tax side, either because they lack a broad-based income tax or because their tax codes don’t conform to major provisions of the federal personal income-tax code. Roughly another nine states will see modest gains equal to less than 1 percent of state general funds. In total, about 29 states will see modest revenue gains, at best, according to early unpublished estimates from the Institute on Taxation and Economic Policy (ITEP). 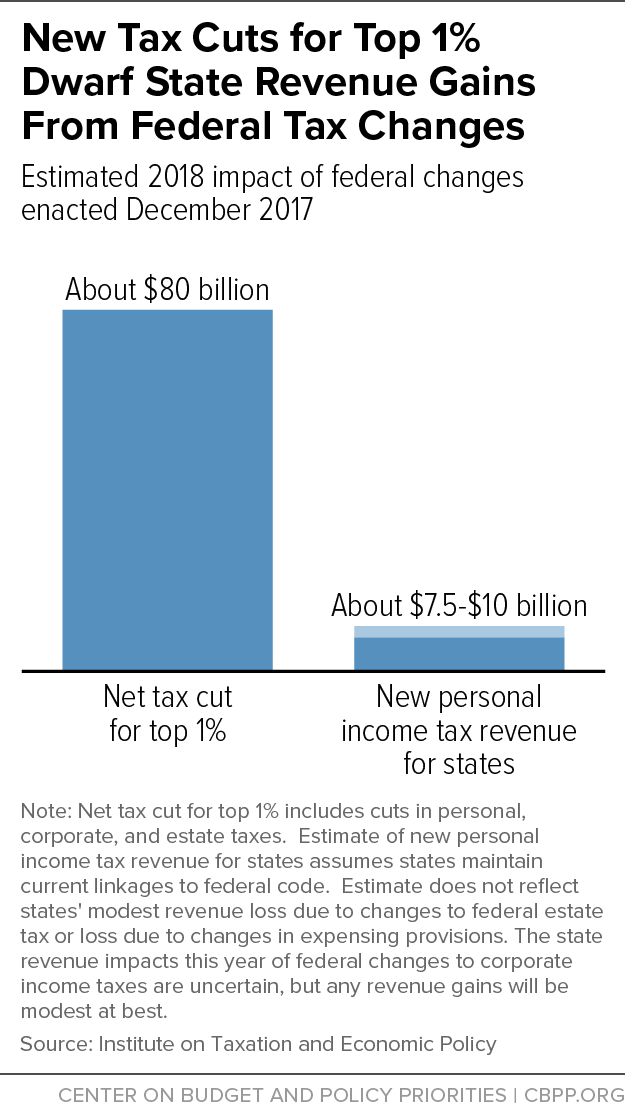 The remaining states may see more sizeable revenue gains if they retain their current connections to the federal code, but the magnitude is highly uncertain. Further, in many of the states with the biggest gains, much of the new revenue would come from the elimination of personal exemptions — a tax increase that would hit lower-income families hardest. That would undermine gains that states have made over the last few decades — under both Republican and Democratic administrations — in cutting income taxes on the working poor.

While the state revenue impact is highly uncertain, there’s little question that state revenue gains will pale in comparison to the windfalls that the richest households will receive in new federal tax cuts. The top 1 percent of households, whose annual income averages over $2 million, will get a net tax cut of about $80 billion this year, including personal and corporate income tax cuts, as well as estate tax cuts. Even under generous assumptions, states will net in the neighborhood of $7.5 billion to $10 billion in new personal income tax revenue this year, ITEP estimates suggest — roughly one-tenth of the total windfall for the top 1 percent. (See chart.) And state revenue losses from the cut in the federal estate tax will modestly reduce those gains. The impact of corporate income tax changes on state revenues is uncertain, but any revenue gains this year from these changes will be modest at best.

Further, while tax cuts for corporations and wealthy households are certain, the state revenue impacts are highly uncertain and could prove more negative than initial estimates suggest. So states should be cautious. Rather than cut taxes based on the assumption that the revenues will materialize, as some suggest, states should focus their response on preparing for potential cuts in federal funding for states (which President Trump and leading congressional Republicans have proposed), as well as the next recession (which will reduce their revenues and force them to spend more on social benefits). They also should strongly consider raising revenue from corporations and other wealthy interests that just got a large federal tax break and use it to invest in public services that undergird broadly shared prosperity, including stronger education systems and more efficient transportation networks.

How Should States Respond to Recent Federal Tax Changes?

March 19, 2019
PreviousFood-Insecure Households Likelier to Have Chronic Diseases, Higher Health Costs
NextStates Should Respond Cautiously to Uncertain Revenue Impacts From Federal Tax Changes
Stay up to date
Receive the latest news and reports from the Center