Returning from its summer recess, Congress now faces the key challenge of designing a budget plan for fiscal year 2018 and beyond. Here are five key points — and links to selected CBPP analyses — about the plan that the House Budget Committee approved in July and the full House will likely consider this month. It would:

1. Seriously harm health care. The House budget plan calls for enacting the House-passed bill to “repeal and replace” the Affordable Care Act (ACA), which would cause 23 million people to lose coverage within ten years, according to the Congressional Budget Office, and make coverage worse or less affordable for millions more.

2. Deeply cut programs that help low-income families make ends meet and move ahead. The House plan calls for $5.8 trillion in non-defense program cuts over the next decade, with half of them ($2.9 trillion) coming from programs for low- and moderate-income individuals and families — even though these programs represent only about a quarter of non-defense spending. The $2.9 trillion in cuts come in two budget categories. First, the budget cuts low-income entitlements, such as Medicaid and other health programs, SNAP (formerly food stamps), and mandatory funding for Pell Grants that help families afford higher education. Second, it cuts programs for low-income people that are funded through the annual appropriations process, which include education, job training, and housing assistance.

By 2027, programs for low- and moderate-income people would shrink by 36 percent, on average. These cuts would make it harder for millions of struggling families to afford the basics — a roof over their heads, food on the table, and health care.

3. Cut non-defense discretionary (NDD) programs to historically low levels. These programs have been squeezed considerably under the 2011 Budget Control Act (BCA), which set annual caps on NDD funding. But the House budget would cut them further, by more than $1 trillion over ten years below the already-low BCA levels. By the tenth year (2027), funding for these programs would fall more than one-third below the current level and 44 percent below the 2010 level (after adjusting for inflation). In fact, these cuts would shrink NDD spending, measured as a percent of the economy, to levels likely not seen since Herbert Hoover was President. 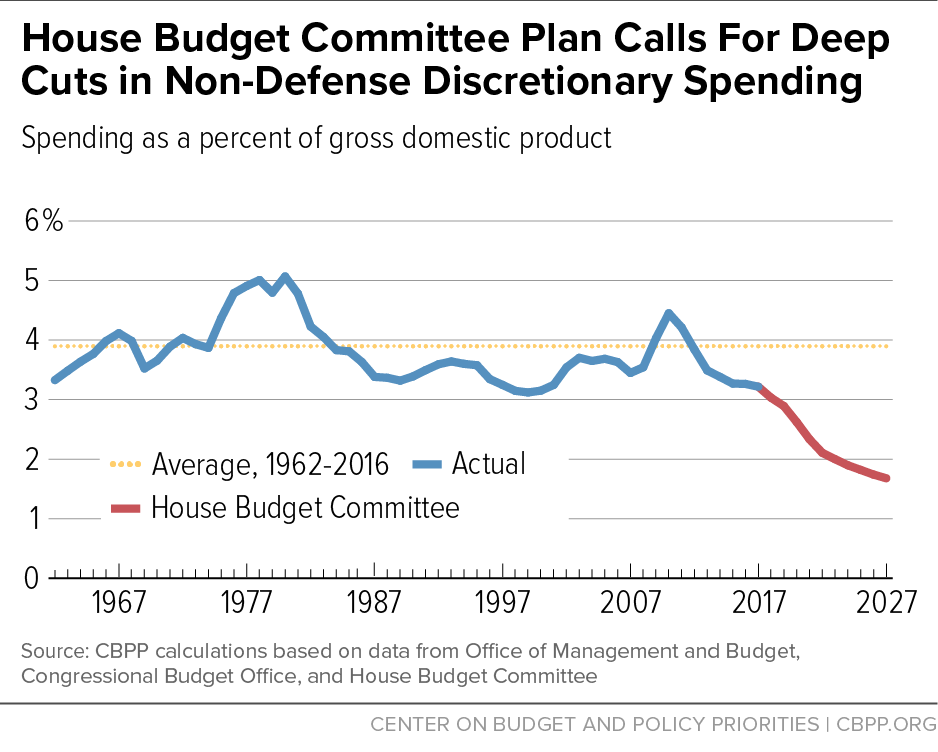 The House plan doesn’t say how Congress would achieve these dramatic cuts. But cuts of this magnitude would have a large impact on key programs serving low-income individuals and families (including education funding for disadvantaged students, nutrition assistance, housing assistance, and job training); on core public services, like law enforcement, Social Security administration, disaster response, and our weather-forecasting infrastructure; and on investments in our economy such as scientific research.

4. Cut taxes for the wealthy. The House plan calls for major tax cuts for the wealthy in two separate ways. First, by endorsing the House-passed health bill, it incorporates that bill’s substantial tax cuts, which are concentrated heavily on the very well-off. Those tax cuts would reduce projected revenues by $1.1 trillion over the next decade.

Second, the House Budget Committee issued a “Policy Statement on Tax Reform” as part of its budget plan to highlight its tax-cutting priorities. It includes expensive provisions favoring the wealthy, such as repealing the Alternative Minimum Tax, cutting the corporate tax rate, and setting a special, lower rate for “pass-through” business income that lets lawyers, hedge fund managers, and other high-income individuals pay taxes on their business income at a very low rate. These additional tax cuts could cost trillions of dollars over ten years. The House plan assumes the policymakers will find ways to offset the cost of these tax cuts but doesn’t explain how.

5. Use the fast-track budget reconciliation process to enact significant entitlement cuts and tax cuts. While outlining a broad ten-year fiscal framework, the budget plan establishes a fast-track “reconciliation” process to achieve the first tranche of entitlement cuts through legislation this year. It calls for various congressional committees to produce ten-year savings of at least $203 billion through cuts in entitlement programs.(The Budget Committee report makes clear that the committees should strive to cut more than $203 billion.) Reconciliation bills can’t be filibustered, so they could pass the Senate with only 51 Republican votes.

Moreover, the budget allows the House Ways and Means Committee to include in the reconciliation bill net tax cuts of any size, as long as they are fully paid for. The cost could be offset either by closing tax loopholes and tax breaks, scaling back popular tax credits, deductions, and other preferences, and enacting other revenue-raising provisions, or by imposing additional entitlement cuts. Thus, the entitlement cuts may swell far beyond $203 billion. Nor would anything prevent Congress from resorting to various gimmicks to mask the cost of the tax cuts.

The reconciliation process that the House budget plan establishes would thus set the stage for Robin-Hood-in-reverse legislation this year that would widen income disparities, increase poverty, and likely cut taxes for those at the top and for large, profitable corporations.

How Would the House Budget Plan Reduce Deficits?

May 30, 2017
PreviousIn Case You Missed It…
NextStates Will Begin Exhausting Federal CHIP Funds by December — Unless Trump and Congress Act
Stay up to date
Receive the latest news and reports from the Center