In her budget plan, House Budget Committee Chair Diane Black directed some of her most draconian cuts at non-defense discretionary (NDD) programs, which promote opportunity, provide building blocks for economic growth, and fund basic public services, among many other things.   These programs have been squeezed considerably since 2010 under the 2011 Budget Control Act (BCA), but the House budget would shrink them to historic lows.  By 2027, the budget plan’s final year, NDD spending would: 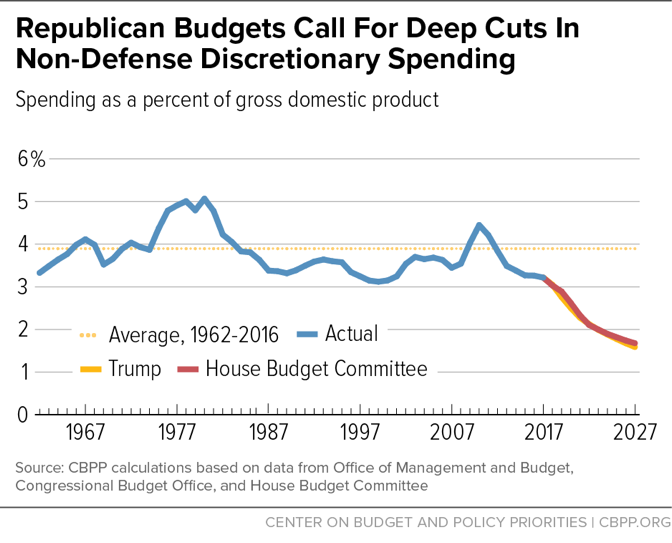 NDD, which policymakers fund each year through the appropriations process, encompasses a wide variety of programs, including medical, scientific, and agricultural research; K-12 education and Head Start; job training; national parks, the Weather Service, and environmental protection; mass transit, highways, and airports; low-income housing assistance; veterans’ medical care; law enforcement; foreign assistance; and the administrative costs of entitlements like Social Security, Medicare, and unemployment compensation.  (The costs of entitlement programs themselves are determined through underlying laws, not annual appropriations, and those laws generally continue from year to year unless policymakers decide to change them.)

Seven years of austerity in NDD funding under the BCA’s tight annual limits have had a large cumulative impact.  The 2017 funding level is already 13 percent below the comparable 2010 level, after adjusting for inflation.  These tight funding levels have limited government’s ability to provide important services, invest in the productivity of the workforce, and meet national needs.  For example, funding for core job training grants is already 19 percent below 2010; federal child care assistance serves fewer than 1 in 6 eligible children; and rental assistance serves only 1 in 4 eligible households, as we’ve described.

Under the House plan, NDD funding would fall further — to 17 percent below the inflation-adjusted 2010 level next year and, by 2027, to a remarkable 44 percent below 2010.

Slashing NDD to levels as percent of the economy not seen since the Hoover administration is no way to address today’s challenges.  Policymakers should invest in the country’s future, not turn the clock back.

April 13, 2020
Stay up to date
Receive the latest news and reports from the Center