3 Reasons to Expand EITC for Childless Adults Amid COVID-19

In their next economic relief package, policymakers should include a modest but important measure that would temporarily expand the Earned Income Tax Credit (EITC) for tax year 2020 for adults not raising children in their home. This measure, which is in the House-passed Heroes Act, would (1) generate timely, effective fiscal stimulus to help the economy recover, (2) help avoid a poverty spike; and (3) boost the incomes of those earning low wages, including those doing essential work to help the country weather COVID-19.

Providing timely, high bang-for-the-buck stimulus. The Heroes Act would expand the EITC for more than 15 million low-income, working childless adults aged 19-65, who currently get no credit from the EITC or only a miniscule one. This expansion would satisfy a key feature of the best fiscal stimulus: getting more money to people who need it the most and are likeliest to spend all of it on necessities. Such targeted measures do double duty, relieving people’s financial hardship and helping the economy by shoring up demand for goods and services. The EITC measure would cost a relatively modest $10 billion and would provide high bang for the buck, with each dollar that the government spends generating $1.20 in economic activity, Moody’s Analytics estimates.

This EITC expansion would also be well timed. Households would get the enhanced credits when they file their 2020 tax returns early next year, at a time when the Congressional Budget Office projects that unemployment will be still be above 9 percent. As policymakers in the coming weeks negotiate what may be the last relief package for 2020, it’s crucial that they extend targeted stimulus into next year.

Helping avoid a poverty spike. One obvious way to help avoid a poverty spike during this downturn and avert its debilitating short- and long-term effects is to stop taxing people into, or deeper into, poverty, which currently happens to 5.8 million childless adults aged 19-65 who work in low-wage jobs. Disproportionately people of color — about 26 percent of them Latino and 18 percent Black (compared to 19 percent and 12 percent of the population, respectively) — this group qualifies for either no or just a tiny EITC that doesn’t offset what they owe in payroll taxes (and, in some cases, in income taxes as well). As a result, the federal tax system taxes them into or deeper into poverty.

The Heroes Act’s EITC provision would address this tax-code flaw for 2020 by raising the maximum credit for childless adults from about $540 to roughly $1,500. It would make childless workers eligible for the credit with incomes up to about $21,000, up from the current $16,000. Importantly, it would also make several groups of childless workers newly eligible for the credit, including those aged 65, those aged 19-24 who aren’t full-time students, and those aged 18 who are experiencing homelessness or are former foster children. More than 15.4 million childless workers would benefit from this expansion. (See table below for state-by-state numbers.) 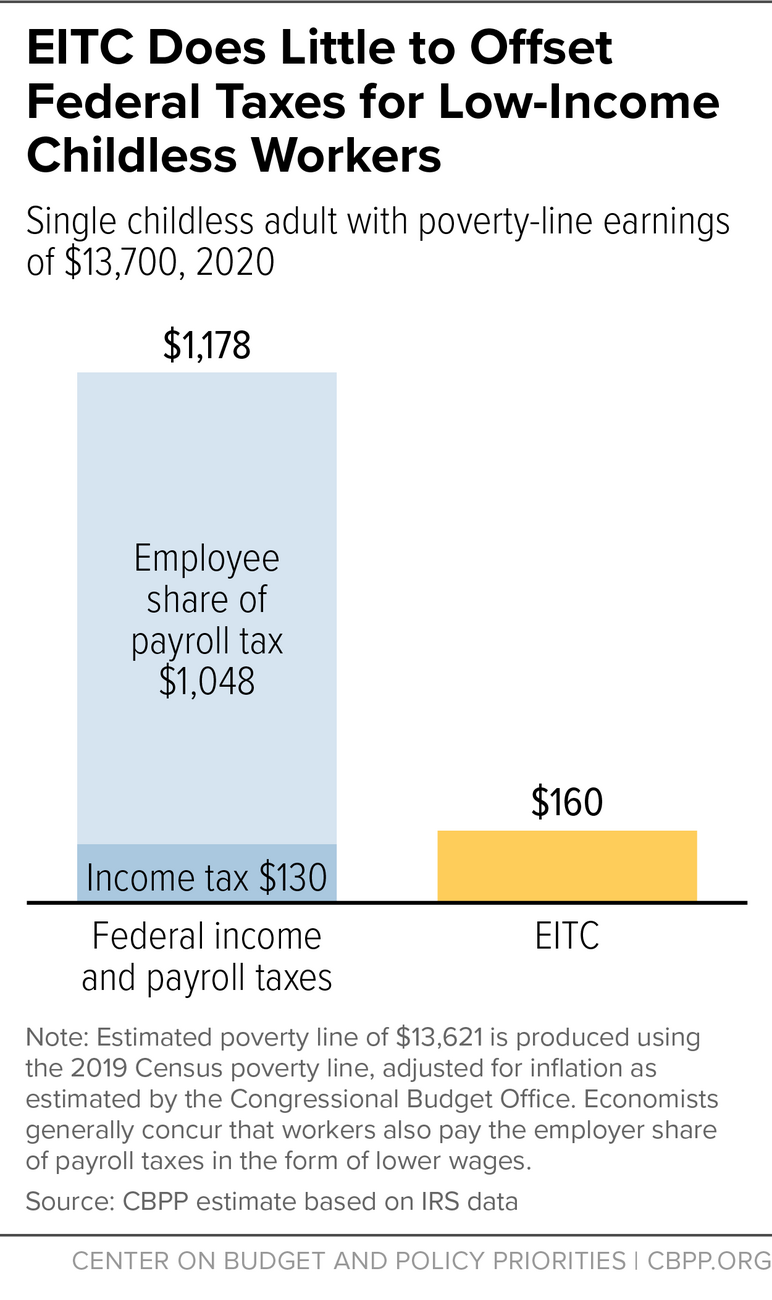 Consider a convenience store cashier who works 35 hours a week at just above the federal minimum wage, earning $13,700 a year, slightly above the poverty line for a single individual. With just a small EITC of $160 and nearly $1,200 of tax liability from federal income and payroll taxes, the current tax code pushes her about $940 below the poverty line. (See chart.) The Heroes Act would raise her EITC to $1,145, an increase of about $990, which would keep her from being taxed into poverty.

Boosting incomes for key low-wage groups. The pandemic and recession have hit two low-wage sectors quite differently. Those working in the restaurant industry, for example, faced severe and immediate layoffs, while those working in grocery stores or as home health aides were deemed essential and have been working to help people across the country meet their basic needs. Expanding the EITC to childless adults would help many people in both groups.

It would boost the income of millions of people getting low pay despite doing essential work during the pandemic such as preparing food, providing in-home health services, and handling, packaging, or transporting goods. This work has always been important, and at the very least it deserves the modest boost that an expanded EITC would provide.

For those who have been laid off but can find safe work as the economy recovers, this EITC change would provide an important income boost. As areas begin to reopen, health concerns will likely (and should) keep people cautious about face-to-face contact, so many low-wage jobs will not return soon. Those who can’t find safe work will need robust unemployment insurance. But for those who can secure safe work, this EITC expansion would serve as a wage bonus, underscoring how these policies can complement each other.

Note: Childless workers who would benefit from the Heroes Act EITC expansion are those aged 19-65 (excluding full-time students 19-24).