Commentary: Republican Tax and Budget Agenda Would Leave Most Low- and Middle-Income Children Worse Off

The budget plan that Senate Budget Committee Chair Mike Enzi unveiled September 29 would allow Congress to fast-track enactment of $1.5 trillion in deficit-increasing tax cuts and allow the tax-writing committee to cut critical programs, including health coverage, to make the tax cuts even larger.  And, by increasing deficits and debt, the tax cuts would intensify pressure, likely in the next several years, for steep budget cuts in programs that help low- and middle-income families or support longer-term economic growth, which is important to children’s future prospects.  Most low- and middle-income children and their families would likely lose more from these budget cuts than they would gain from the tax cuts.

Last week, the Trump Administration and congressional Republican leaders unveiled a set of tax proposals intend to serve as the framework for their forthcoming tax bill.  The so-called “Big Six” tax framework specifies large tax cuts aimed at profitable corporations and wealthy households while offering little overall to lower- and middle-income working families.  While lacking in some details, the plan closely follows many aspects of the House GOP’s “Better Way” tax plan released last year, which also was heavily tilted to those high on the income scale.

The tax framework would:  reduce tax rates on high-income households and wealthy corporations; cut taxes on so-called “pass-through” income, a type of income from certain financial firms, lobbyists, law firms, and other high-earning “pass-through” businesses; and eliminate both the estate tax on very large inheritances and the Alternative Minimum Tax.  Taken together, these provisions would provide extremely large tax cuts to the wealthiest families, even after accounting for the plan’s elimination of certain deductions including the deduction for households’ state and local tax payments.

TPC estimates that the GOP framework would cost more than the already large $1.5 trillion in deficit-increasing tax cuts the Senate budget resolution calls for.  Congress would have several choices for bringing the plan’s net cost down to $1.5 trillion:  cut entitlement programs under the jurisdiction of tax-writing committees, including programs that provide health care and basic assistance for struggling families; raise revenues by closing loopholes or other measures; or lower the cost of the plan’s tax cuts, which could be done in part by using gimmicks to mask the tax policies’ true cost.

Tax Cuts Will Increase the Deficit

If policymakers now enact large, unpaid-for tax cuts, deficits will balloon.  Many of those in Congress who support tax cuts today will likely declare the deficit a crisis when that occurs, and point to spending as the culprit.  When they turn their sights to deep budget cuts, children will risk bearing a large share of the burden.

The higher deficits resulting from unpaid-for tax cuts would likely trigger new calls for budget cuts, including cuts in programs that provide important investments and supports to children.

President Trump and many Republican lawmakers have repeatedly cited the projected growth in debt that we already face — before accounting for a $1.5 trillion tax cut — to justify their proposals for harsh budget cuts, including substantial reductions in programs benefitting children or promoting long-run economic growth.  For example:

The entitlement program cuts in the all three budgets grow over time.  For example, by 2027, the House budget would cut SNAP by about 40 percent.  Children would be a prime target for cuts of this magnitude, since SNAP serves 20 million children, and two-thirds of SNAP benefits go to households with children.

The House, Senate, and Trump budget plans also call for sharp cuts in non-defense discretionary funding — the budget area that funds child care and Head Start, K-12 public education, housing assistance, job training, and student aid, among other programs.  The Senate budget would cut this part of the budget by 18 percent in 2027 compared to the 2017 level, and by 29 percent compared to the 2010 level, after adjusting for inflation.  The cuts in this area in the House and Trump budget plans are even deeper.  This part of the budget also funds a broad set of public services that help children indirectly by supporting longer-term economic growth, such as scientific research, or by supporting basic government functions such as protecting the safety of the food and water supplies.

Most of the budget cuts in these budget plans likely won’t be enacted this year.  Republican congressional leaders have signaled that their primary focus in the months ahead is enacting their deficit-increasing tax cuts.  But the budget plans clearly show where congressional Republicans will look in the future when they turn their attention to deficit reduction.

Cuts like those contained in these budget plans would increase poverty and hardship among children, reduce access to health care, and reduce children’s likelihood of success in school.  Federal assistance programs, including SNAP and refundable tax credits, lifted 11 million children above the poverty line in 2014 and made another 9 million less poor.[6]  And Medicaid and the Children’s Health Insurance Program are largely responsible for lowering the share of children who are uninsured from 14 percent in 1997 to 5 percent in 2016, well below the rate for non-elderly adults.[7]  Not only do these investments reduce poverty and hardship in the near term, but a growing body of research shows that assistance programs improve poor children’s educational and health outcomes as adults.[8]

While the tax cuts outlined in the GOP framework are heavily skewed toward high-income households and profitable corporations, the subsequent program cuts to bring down rising deficits would likely hit low- and middle-income Americans the hardest.  That means that most families with children would likely be worse off after spending cuts are made to offset the cost of the tax cuts.

Consider, for example, a low-income family that loses Medicaid coverage due to cuts in the program along the lines of those in the Trump budget and in various bills to repeal and replace the Affordable Care Act.  If a family member — parent or child — is uninsured and faces a serious medical problem, their health and financial stability could be at risk.  At that point, a meager $20 tax cut (the average under the GOP framework for families with children and incomes under $75,000) would provide no meaningful help.

Even if the tax bill included a somewhat more favorable Child Tax Credit expansion, a tax-cut bill that significantly increases the deficit will very likely lead over time to harmful cuts in assistance that struggling families need to make ends meet and to obtain health care, as well as to cuts in a broad set of investments important to children’s future prospects.

Ultimately, to be fiscally responsible and to be beneficial for children, a tax bill must, at a minimum, be revenue neutral — that is, it must pay for its tax cuts by closing unproductive or low-priority tax breaks or otherwise raising revenues.  And any tax cuts that are provided should benefit those who most need help: struggling low- and modest-income families, not those at the top of the economic ladder. 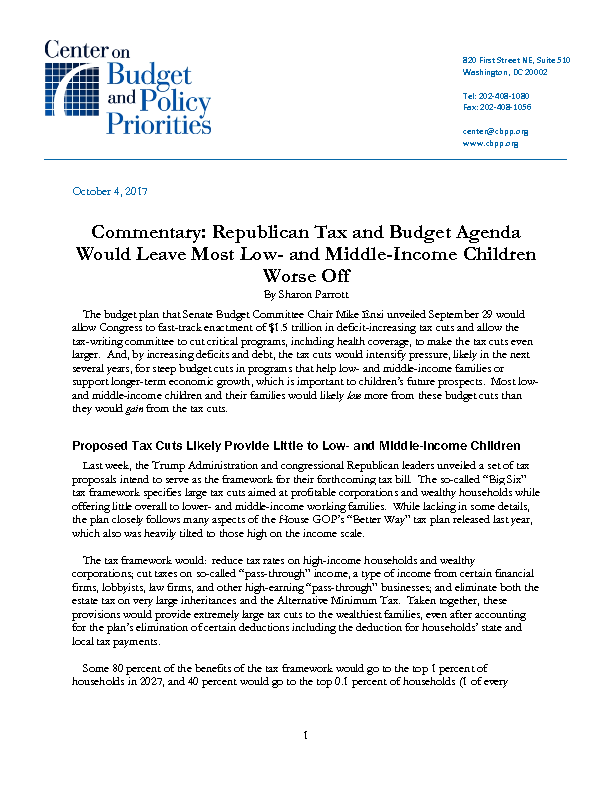