The Senate Republican tax bill would only generate enough added economic growth to offset $179 billion of its $1.4 trillion official cost over the next decade, a new Tax Policy Center (TPC) analysis finds. That’s one more rebuff to Republicans’ claims that their tax bill would largely or entirely pay for itself through stronger economic growth.

The Joint Committee on Taxation (JCT), Congress’ official scorekeeper for tax legislation, found that the bill would lose $1.4 trillion in revenues over ten years. Accounting for the additional revenue from the added economic growth that the bill would generate, JCT found yesterday that it would lower the bill’s cost by $407 billion over the decade. That’s higher than the new TPC estimate cited above and a little higher than the more optimistic of two estimates from the Penn-Wharton Budget Model (PWBM), but it’s still far below JCT’s $1.4 trillion official cost. And it’s even further below the bill’s $1.9 trillion cost if the sunsets and delayed tax increases that the bill includes never take effect, as bill proponents say they favor (see chart).

With TPC’s new figures, we now have estimates from three credible, nonpartisan organizations — JCT, PWBM, and now TPC — that the Senate bill would add at least $1 trillion to deficits over the next decade, and probably much more. (While these estimates all reflect the bill that the Senate Finance Committee passed November 16, last-minute changes that Senate Republicans make before the full Senate votes will not materially affect them.)

Those who care about fiscal responsibility should take this evidence seriously. Instead of looking for gimmicks or engaging in magical thinking, they should offset the cost of high-priority tax cuts by broadening the tax base in ways that don’t impose new burdens on those least able to afford them.

We recently explained why increasing, from 17.4 to 20 percent, the Senate tax bill’s deduction for “pass-through” income — income from businesses such as partnerships, S corporations, and sole proprietorships that owners claim on their individual tax returns that’s now taxed at the same rates as wages and salaries — would make the bill more skewed to the top. Today, Senate Republicans are reportedly increasing it to 23 percent — which would make it even more tilted to the most profitable businesses and wealthiest business owners, for the same reasons we’ve explained.

The Joint Committee on Taxation (JCT), Congress’s official scorekeeper for tax legislation, just threw cold water on congressional Republicans’ claims that the tax bill before the Senate would stimulate enough additional revenue through economic growth to cover its cost.

JCT finds that the additional economic growth resulting from the bill would generate $458 billion of additional revenue between 2018 and 2027 and also raise interest rates, which in turn would increase interest costs on the debt by $51 billion. Thus, JCT finds that even after accounting for the $407 net reduction in the deficit due to economic growth, the Senate bill would still cost $1 trillion.

As many mainstream analysts have predicted, JCT’s estimated growth effects are similar to those found by the independent analysts at the Penn-Wharton Budget Model (PWBM) and the Tax Policy Center. PWBM, for example, finds that economic growth from the Senate bill would generate only between $117 billion and $368 billion in additional revenue between 2018 and 2027 (see chart). 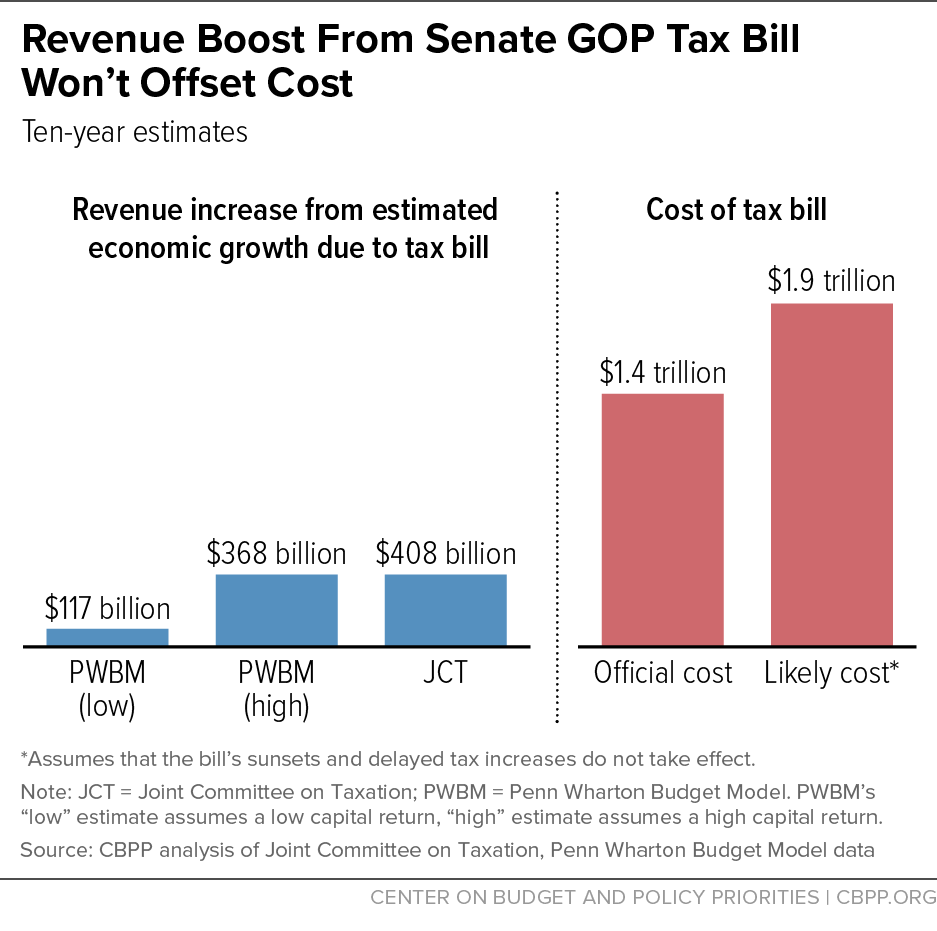 The part of the federal income tax deduction for state and local taxes (SALT) that’s most valuable to taxpayers in most states — not just those with relatively high taxes — is the deduction for state and local income or sales taxes. Yet that’s exactly the part of SALT that the House-passed tax bill would eliminate, and that the tax bill that may ultimately come to a vote in the Senate would likely eliminate as well.

The SALT deduction lets taxpayers deduct their state and local income or sales taxes, whichever are greater, and their state and local property taxes. As it now stands, the Senate tax bill would fully eliminate SALT to help pay for tax rate cuts heavily tilted to the wealthy — a bad deal for most Americans. The House bill would eliminate the deduction for income or sales taxes also to pay for rate cuts heavily tilted to the wealthy, but it would allow a deduction of up to $10,000 for property taxes.

The Senate reportedly may adopt the House approach, or something similar, to assuage the concerns of lawmakers from states with relatively high property taxes. That would still be a bad deal for most Americans. The income or sales tax deduction accounts for more than half of the total dollar amount of SALT deductions in 41 states, and more than 70 percent of SALT deductions in 16 states. (See map.)

As we’ve explained, retaining a limited SALT deduction for property taxes does little to protect state budgets from the strain that fully repealing SALT would produce. Thus, eliminating the income or sales tax deduction would likely lead over time to cuts in state funding for schools, health care, and other services on which middle- and lower-income families rely.

President Trump reportedly opposes an amendment from Senators Marco Rubio and Mike Lee to allow millions of children in low-income working families to receive a modestly more adequate Child Tax Credit (CTC), while slightly scaling back the bill’s corporate tax cuts that would flow overwhelmingly to those at the top. Our new blog post explains how this underscores the fact that large, permanent tax cuts for corporations are the President’s highest priority for the Senate tax bill. Even if the bill is modified to include the amendment, its tilt to the top will still be extreme, and the harm it’s likely to inflict on children in low- and moderate-income working families over the long run will still be large.

Republicans claim their tax plan broadly benefits all Americans, even as independent analyses show that its greatest gains go to those at the top. In any year of the plan, in fact, millions of low- and moderate-income Americans would face tax increases or be left out altogether, new data from the Joint Committee on Taxation show — contradicting Senator John McCain’s claim today that the Senate bill “would directly benefit all Americans.”

That figure would rise further, to 37.8 million, by 2027, when the individual tax cuts would have expired but the bill’s corporate tax cuts would remain, alongside its repeal of the Affordable Care Act’s individual mandate (the requirement that most people get health insurance or pay a penalty) and adoption of a slower measure of inflation for adjusting tax brackets and other tax provisions each year, which raises taxes across the board.

The graphic actually understates the number of people who would lose under the bill. It doesn’t include the impact of higher insurance premiums or lower Medicaid spending resulting from mandate repeal or the spending cuts that could well result from the higher deficits that the bill’s unpaid-for tax cuts would prompt.

Senator John McCain stated today that he supports the Senate GOP tax bill. But his reasoning is flawed, as our previous analyses show:

With Republican senators reportedly considering adding a “trigger” to their tax bill that would activate corporate tax increases if in 2022 the bill’s promised positive economic effects haven’t materialized, our new paper explains why the trigger won’t make the bill fiscally responsible.

If it took effect, the tax cuts still would fall far short of the standard of not increasing the deficit that various Republican senators have argued the tax bill will meet. And there is ample historical evidence to support the view that the trigger’s tax increases are unlikely to take effect. To comply with Senate budget rules, for example, President Bush’s 2001 tax cuts were all sunset to mask their long-term costs, but policymakers extended nearly all of them rather than allow tax increases to go into effect.

Further, if the economy is slowing, policymakers will surely use that as a reason not to raise taxes at that time, since a tax increase would further weaken a struggling economy.

Former Treasury Secretary Robert E. Rubin writes in the Washington Post that no serious lawmaker should support the Senate bill, explaining that the trigger is both unworkable and misguided.

Senators are reportedly considering increasing to 20 percent the deduction that the Senate tax bill would give business owners for their “pass-through” income — income from businesses such as partnerships, S corporations, and sole proprietorships that owners claim on their individual tax returns that’s now taxed at the same rates as wages and salaries. The bill already would let business owners deduct 17.4 percent of their pass-through income from their taxable income, meaning that that amount would be tax free, subject to certain restrictions.

The bill’s current deduction is heavily skewed to the most profitable businesses and wealthiest business owners, we’ve explained. The amendment would make it worse. The extra 2.6 percentage points would give more to owners of the most profitable businesses, who make a greater share of their income from pass-throughs and are taxed at the highest rates.

As we’ve explained, Republican leaders are using selective and misleading estimates to assert that every income group would get a tax cut from the Senate Finance Committee-passed tax bill. In lobbying for the bill, Committee Chairman Orrin Hatch is using the Tax Foundation’s cherry-picked examples of winners under the bill. Here are the “middle-class” families (in circles) on the New York Times’ excellent interactive graphic:

Chairman Hatch’s examples are skewed to families who would get a tax cut, ignoring the millions of losers that the tax bill would create — and who the Times’ graphic clearly shows. The number of losers would grow after taking into account both health coverage losses because the bill eliminates the Affordable Care Act’s individual mandate (that most people get health coverage or pay a penalty) as well as the fact that most of the bill’s individual income tax provisions expire after 2025, as we’ve explained.

Republican congressional leaders point to Joint Committee on Taxation (JCT) and Congressional Budget Office (CBO) estimates of the pending Senate GOP tax bill to say that every income group would get a tax cut from it. But they use these estimates in highly selective and extremely misleading ways, as we’ve explained. They focus on the average tax change for an income group, which obscures the millions of filers within the group who would face tax increases; ignore the fact that the bill would get far worse after 2025, when all of its individual income tax cuts would expire; and ignore the impact from the bill’s repeal of a key health reform provision.

CBO and JCT have estimated the bill’s impact in 2027. Even on average, every income group with incomes below $75,000 would face losses (see graph).

While it’s still unclear exactly what the Senate will vote on and when, we’ll be posting updates here throughout the debate.

PreviousJCT: Millions of Households Face Tax Increase or No Tax Benefit Under Senate GOP Bill
NextIn Case You Missed It…
Stay up to date
Receive the latest news and reports from the Center