The tax bill on which the Senate may vote this week would provide an even larger share of its tax benefits to the wealthy than the tax cuts enacted under President George W. Bush, which many lawmakers — including several Republican senators — criticized for their misplaced priorities. 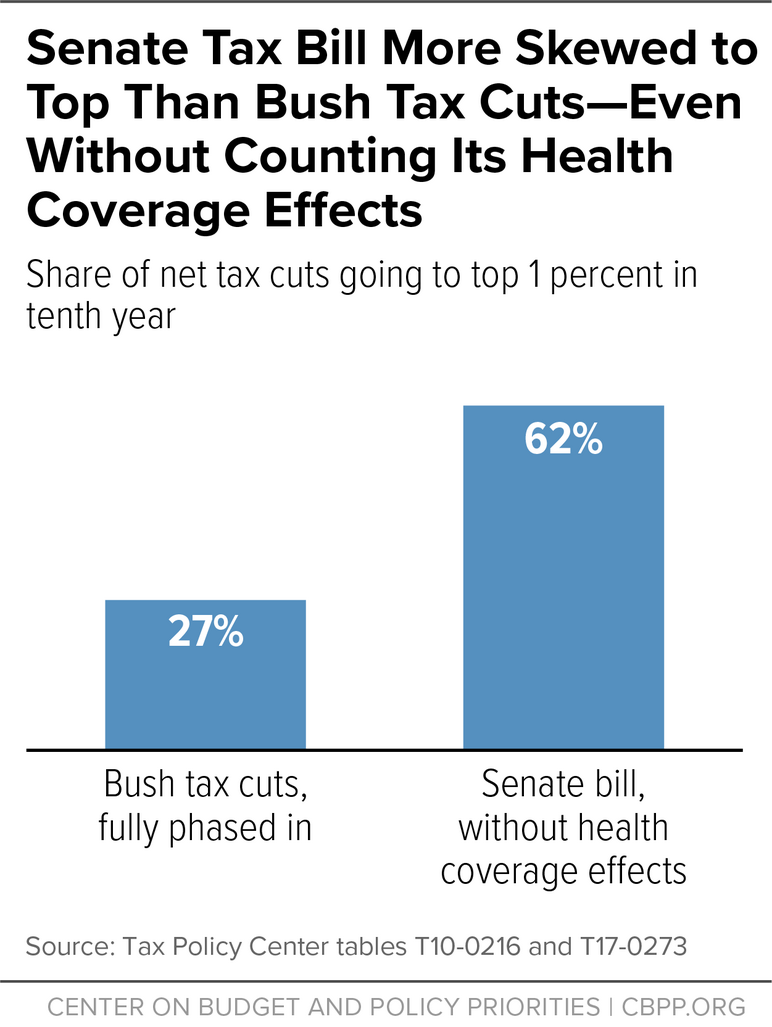 Senator John McCain, for example, said in 2000 that then-Governor Bush’s proposed tax cuts were “misplaced” because “Sixty percent of the benefits . . . go to the wealthiest 10% of Americans.” And when voting against the tax-cut package in 2001, he said, “I cannot in good conscience support a tax cut in which so many of the benefits go to the most fortunate among us, at the expense of middle class Americans who most need tax relief.”

Yet the tax bill that the Senate Finance Committee has passed would deliver 62 percent of its net tax cuts in 2027 to just the top 1 percent of households, the Tax Policy Center (TPC) estimates — and that’s without accounting for its effects on health coverage. By comparison, the tax cuts that President Bush and Congress enacted in 2001 and 2003 delivered 27 percent of their benefits to the top 1 percent when fully phased in, TPC estimates (see graph).

The stark difference between the pending Senate bill’s treatment of those at the top and everyone else comes into even sharper focus when we include the impact of its repeal of the Affordable Care Act’s individual mandate (the requirement that most people get health insurance or pay a penalty. All of the savings from repeal — $53 billion in 2027 — would come because fewer people would be insured, which would lower federal costs for Medicaid and for tax credits that help people buy insurance. TPC’s estimates of the bill don’t include these effects, but the Joint Committee on Taxation (JCT) and the Congressional Budget Office (CBO) have estimated the bill’s impact on federal revenues and spending, with estimates that both include and exclude the effects of repealing the individual mandate.

That’s because, as we’ve explained, while the bill makes deep cuts in corporate taxes that are permanent, all of its individual income tax cuts expire at the end of 2025. To pay for its permanent corporate tax cuts, the bill repeals the individual mandate and adopts a slower measure of inflation for adjusting tax brackets and other tax provisions each year, which raises taxes on households across the board.

The Bush tax cuts substantially increased annual budget deficits and were responsible for a third of the national debt by 2018. Similarly — but at a time when the nation’s fiscal outlook is far worse than during the Bush era — the Senate bill would add at least $1.5 trillion to deficits over ten years. As we’ve explained, that’s part of a two-step Republican fiscal agenda: when deficits rise, those who supported the tax cuts will likely label these deficits as unacceptable, point to spending as the culprit, and call for the kinds of deep program cuts that Republicans have outlined in their long-range budget plans — cuts that would mostly affect low- and middle-income households.