The Senate Republican tax plan raises the maximum Child Tax Credit (CTC) from $1,000 to $1,650 per child, but millions of children whose parents work for low wages would receive a severely limited increase or none at all.

While severely limiting the child credit increase for many of the children who need it most, the bill extends the child credit to many high-income families currently ineligible for it — including families that make $1 million a year.  The bill dramatically raises the income level at which the credit begins phasing out, from $110,000 per couple under current law to $1 million.  Whereas a single mother with two children who works full time at the minimum wage and earns just $14,500 would receive a child credit increase of only $75, a family of four with a $1 million income would get $3,300. (See chart.)

Today, the CTC provides a maximum tax credit of $1,000 per eligible child under age 17.  It is “partially refundable,” meaning that it’s partly, but not entirely, available to working families with incomes too low to owe federal income tax. Specifically, the refundable portion of the CTC is limited to 15 percent of a family’s earnings over $3,000. Because of the credit’s slow phase-in for working families with low incomes, families with two children don’t receive the full credit of $1,000 per child until their earnings reach $16,333.

The Senate plan would raise the maximum CTC to $1,650 per child and make the credit available to children under 18, newly allowing 17-year-olds to qualify.  It also would slightly lower the earnings threshold to qualify for the refundable part of the credit, from $3,000 in earnings to $2,500.  This means that a low-income family’s refundable credit would increase by only $75 (15 percent of the $500 reduction in the refundability threshold).

Consider a single mother with two children working full time as a home health aide at the federal minimum wage of $7.25 an hour and earning $14,500 a year. Her current CTC is $1,725, or $275 less than what two-child families with incomes high enough to qualify for the full $1,000-per-child credit receive.  Under the Senate proposal, her CTC would increase by $75. Ten million children in working families around the country would receive that same token increase.

Another 14 million children in low-income working families would receive less than the full $650-per-child CTC increase.  That’s largely because the Senate bill – like the House bill – goes out of its way to limit their credit by capping the amount of the CTC that can be refundable at $1,100 per child in 2018 (indexed for inflation thereafter).  Thus, the advertised maximum $1,650-per-child CTC doesn’t apply to these working families. 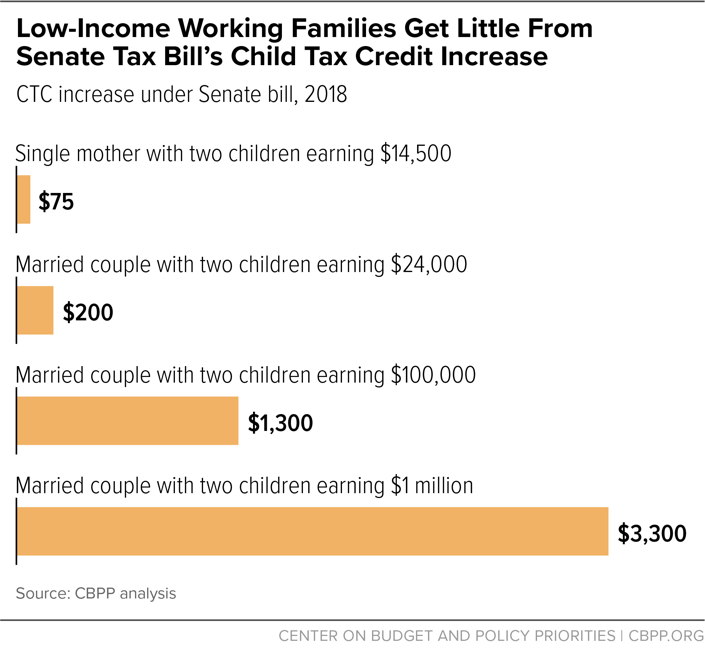 To see what this means, consider a family where the father works as a day laborer making $24,000 a year and the mother stays at home to care for their two young children.  Based on their earnings, this couple would appear to qualify for a refundable CTC of $3,225 (15 percent of their earnings over the new $2,500 earnings threshold).  But that ignores the proposal’s fine print.  Because of the Senate’s cap on refundability, this family would receive $2,200, or only $200 more than under current law.

The children whom the Senate bill would least help are those for whom a larger CTC could do the most to reduce hardship, help families make ends meet, and create a more stable environment for children. They’re also the children for whom, extensive research indicates, a CTC boost would likeliest improve their odds of being healthy, doing well in school, going to college, and earning more in adulthood.

While largely excluding lower-income children, the Senate bill dramatically expands the CTC’s availability for families with six- and even seven-figure incomes by raising the income level at which the credit begins phasing out to $1 million per couple.  So, as noted above, a family of four making $1 million would newly receive a CTC of $3,300.  The credit would phase out when the income of a married family of four reached $1,066,000.

The Senate’s CTC proposal is a surprising disappointment given the vocal support from Republican Senators Marco Rubio, Mike Lee, and others for increasing the CTC for low-income working families.  While an earlier proposal from Senators Rubio and Lee still falls short – delivering only a partial CTC expansion to millions of these families – it would provide them with considerably more than token help, something Senator Rubio rightly argues is important for any CTC expansion.  But the Senate bill released yesterday, like the House bill, rejects that objective.

December 7, 2022
PreviousStudy: Coupling Vouchers With Supportive Services Helps Veterans Find Housing
NextIn Case You Missed It...
Stay up to date
Receive the latest news and reports from the Center